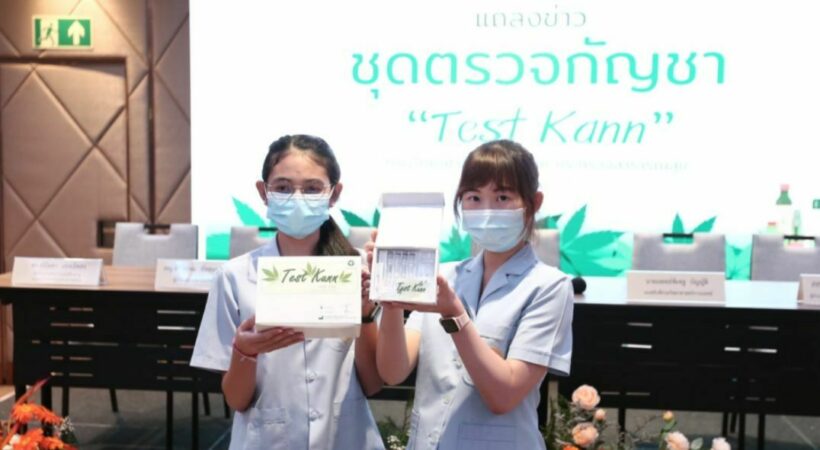 Thailand took marijuana off its list of narcotics, but extracts with higher than 0.2% tetrahydrocannabinol – the “happy” chemical – are still illegal. The law was designed to discourage the recreational use of cannabis, but no one knew how it could be enforced, until now.

Cannabis enthusiasts were confused with the governments “0.2%” THC rule, with many not knowing whether it would apply to cannabis flowers, which are a pure form of marijuana, or only to “extracts” such as oils or foods in which cannabis is used as an ingredient.

The Thai government has given clarification that the rule does not apply to cannabis flowers. The Department of Corrections even vowed to return 16 tonnes of confiscated marijuana to drug offenders.

Since June 9, a myriad of cannabis dispensaries have opened up all over the country, openly selling cannabis flowers with high THC levels. The THC in some potent strains exceeds 20%.

So, the cannabis testing kits – which cost less than 100 baht to produce – will likely be used to test cannabis products, such as drinks, food, oils and cosmetics to ensure they contain less than 0.2% THC. Any products found to have higher levels will be considered an illegal narcotic.

The tests are not yet ready for sale, but the first 15,000 test kits produced will be given to organisations who need them for free.

Since cannabis was legalised, Thai media has gone crazy for cannabis-gone-wrong stories. Thai media reported that at least 100 people in Khon Kaen province, northeast Thailand, had been admitted to hospital for “cannabis allergies” or “cannabis overdoses” since June 9.

Many of the patients admitted had allegedly eaten cannabis-infused food and experienced dizziness. Some had eaten at restaurants and were not even aware they had consumed marijuana, so it’s no wonder they were alarmed when they got high and checked themselves into hospital.

By developing regular and cheap THC testing, the government hope to avert such disasters and ensure that vendors and restaurants are sticking to the 0.2% rule.

Cannabis smoke is still considered a “public nuisance” and smoking cannabis in a public place is still a criminal offence punishable by 3 months in prison and a 25,000 baht fine, or both.