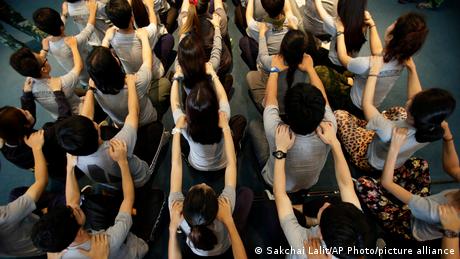 Thai universities’ infamous orientation activities have again come under the spotlight following the tragic death of a 22-year-old student Veeraphan Tamklang in the capital, Bangkok, this month.

He was kicked to death by a group of 12 senior students as punishment for not pitching any ideas for hazing activities.

These sorts of stories still regularly make headlines in Thailand, in spite of widespread condemnation of the brutal culture of humiliating and degrading initiations, and multiple campaigns by universities to stamp it out.

“We always see this kind of news when a new semester is approaching. The system is rotten. It encourages seniors to think they can do whatever they please, that they are the ones in power and can abuse it,” Phongsatorn Tancharoen, the 20-year-old vice president of Chawdin Party at Mahasarakham university, told DW.

Traumatic for many students

At the beginning of each academic year, Thailand’s college freshmen and women undergo hazing rituals at decades-old traditional welcoming ceremonies.

The degree of hazing varies among schools and faculties. Most new students usually undergo weeks of hazing from their seniors in the name of bonding with their faculty classmates under the creed of Seniority, Order, Tradition, Unity and Spirit (SOTUS).

But a way to foster harmony and friendships can easily be corrupted and turn a rite of passage into a traumatic incident when the violence and humiliation go too far.

For the most part, the activities are merely uncomfortable or awkward, and time consuming. But they can also lead to deaths if seniors see fit to inflict corporal punishment on new students.

“I had to ‘wai’ [a respectful greeting normally reserved for one’s elders] to seniors and we had to sit on the floor,” Peerada Nuruk, a 23-year-old engineering student and member of the group ANTI-SOTUS, told DW.

“We weren’t allowed to wear makeup or have our hair dyed either. We also had to wear straight knee-length skirts and black court shoes throughout the entire period of initiation rites,” Peerada said.

Peerada added that the activities contradict the need to promote logical thinking. While she did not suffer any form of physical abuse, she said her seniors tried to make her succumb to peer pressure to make her participate in the initiation rite.

“When I started questioning or resisting, my peers viewed me as a troublemaker,” Peerada said. “After realizing that the activities are not right, I no longer complied with the rules set by the seniors. Others then thought I was causing trouble because these seniors scolded them. They didn’t confront me directly but used peer pressure to force me back into the system.”

Phongsatorn also questioned the necessity of hazing rituals when he took part in a welcoming ceremony in his freshman year.

“I was confused why we had to dress the same way and had to be trained to sing university songs. The feeling of cherishing one’s own educational institution should come from the desire to improve it, not because we are singing about it,” Phongsatorn said.

“We have to allow new students the opportunity to question if these activities should still exist and whether or not they want to participate. Seniors have no right to force them to conform,” he added.

Peerada believes that the practice contributes significantly to the prevalent culture in Thailand, in which people are discouraged from questioning authority or engaging in critical thinking.

“Dictators also think that we have to do what we are told,” Peerada said. “Those who start questioning or criticizing things that are wrong are detained, jailed or charged. It is like SOTUS, where we can’t question why seniors tell us to do certain things. We only have to obey them, follow the orders, and stay in the system.”

But, increasingly, the troubling nature of SOTUS is being more widely discussed. A few years ago, no one dared to speak out publicly and only questioned the tradition quietly and privately, according to Peerada.

“What’s important is making people realize how SOTUS and dictatorship are related,” Peerada said. “Understanding democratic values will make this tradition continue to disappear. On Twitter, netizens are already discussing it more openly that they go to university to study, not to follow orders from seniors.”