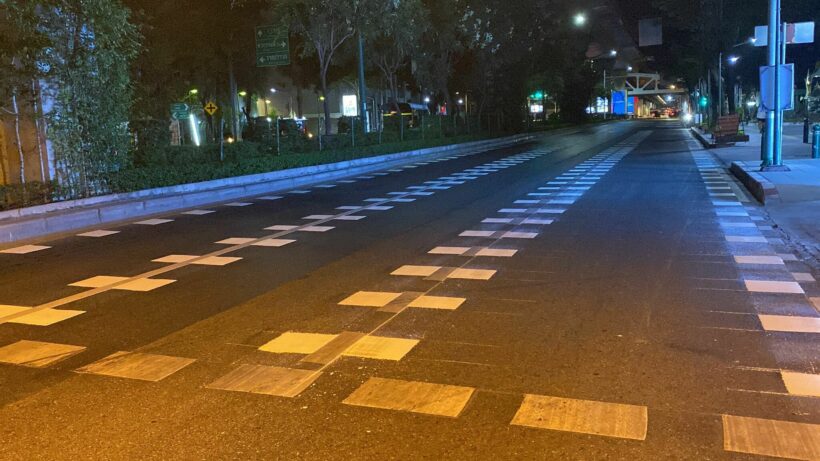 Following the fatal crash where an off-duty police officer ran his Ducati into an eye doctor walking along the zebra crossing, Thais are pointing out traffic violations and officials are making changes to reduce traffic accidents involving pedestrians. Some changes include repainting crosswalks and roads to increase crosswalk visibility and encourage drivers to reduce their speed.

The woman was walking across Bangkok’s Phaya Thai Raod by the Bhumirajanagarindra Kidney Institute Hospital when the officer hit her with his Ducati Monster motorcycle, killing her. The officer enter monkhood after the accident, but was expelled due to criminal charges. He faces seven charges including reckless driving causing death, driving a vehicle without a licence plate, and failure to give right of way to a pedestrian.

Following the accident, Bangkok officials painted traffic calming designs on Phaya Thai Road to encourage drivers to slow down before the crosswalk. White blocks were painted along the lanes narrow down the road, directing each car to stay in the lane. Also, it was marked along the way at 50 metres far from the crosswalk, aiming to notify drivers to reduce their speeds before reaching the crosswalk.

Bangkok reveals over 25,000 drivers broke traffic rules over the past month

Bangkok Metropolitan Administration spokesperson, Pongsakorn Kwanmueng, shared with Thai media that Bangkok together with the traffic police are now working to reduce traffic accidents. The first project starts at Asoke Intersection’s crosswalk where AI technology was installed at the intersection to detect drivers who violate traffic rules. According to Thong Lor Police Station, over 25,094 cases were reported within one month.

Pongsakorn added that technology is another hope to help change the behaviours of drivers and also pedestrians. This will be a model for other spots in Bangkok to apply more technology to help monitor traffic violations.

Yesterday, the members of the Drunk Driving Victim Network placed flowers and notes at a tree by the crosswalk in memory of the doctor and then held a demonstration where they crossed the road. One of the disabled members, who was also a victim of a car accident, started to cross the road and, as we can see from the video, he almost got hit by a motorbike.

He informed the Thai media that the fatal accident didn’t change the behaviour of drivers in Bangkok. He added that the crosswalk should be safe for pedestrians to cross and that drivers should stop or slow the speed down before reaching the crosswalk. He wanted the law to be tougher to prevent similar cases in the future.

Phuket and Udon Thani also started renovating crosswalks following the fatal accident. Phuket mayor Saroj Angkanawirat shared that the crosswalk and traffic signs in Phuket province will be renovated to make it clearer and easier to be noticed by drivers. The project started with a crosswalk in front of Vachira Phuket Hospital. Yesterday, the crosswalk was painted a vivid colour, and the traffic signs nearby will be changed. More pedestrian crossings will be renovated soon, the mayor says.

Udon Thani is also planning to refurbish their crosswalks at risky and crowded spots, like in front of schools and hospitals. The province will take Pattaya’s crosswalks as a model offering larger and more noticeable. Sommai Khotsopha, a civil engineer at the Udon Thani Municipality Office, shared with Thai media that the crosswalk will be in an oversized design approve the standard because the safety of pedestrians is most important.