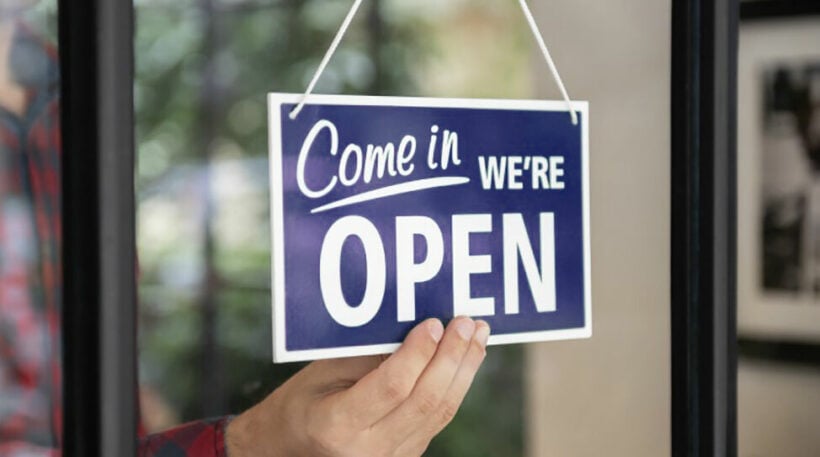 The opening you have when you’re not quite open.

Quarantine-free arrival, except that you’ll still need to book at least 1 night of stay in an approved hotel or AQ (alternative quarantine). No bars are open (officially) and, in most parts of the country, most shops remain closed. In tourist-dependent places like Phuket, more than 90% of the formerly open shops remain closed.

So how ‘open’ is Thailand as it approaches the magic November 1 deadline? It’s certainly more open than most other Asian countries at this time. At least there’s now a determination by the Thai government , rightly or wrongly, to ‘live with Covid’ and get the rusty tourist machinery churning again.

But, for the tourists who used to be able to simply land in Thailand, visa free, or with a simple visa on arrival, those days are now in the rear view mirror.

But those who are happy to jump through the much-reduced set of hoops, you’ll be visiting a new Thailand – the beaches and temples much to yourself, the waters clear, few queues and a population eager to welcome you back. In many ways, there’s never been a better time to visit Thailand.

But there’s still a list of somewhat confusing restrictions and regulations if you want to travel back to the land of smiles at this time. If you want to re-enter Thailand, from November 1, mostly quarantine-free, you’ll need to be fully vaccinated with an approved vaccine. You’ll also need Covid insurance to the value of US$50,000 (it used to be US$100,000). There will initially be 17 provinces you will be able to travel to, although getting to those provinces, passing through higher-risk provinces, hasn’t been explained.

“I would strongly advise people not to rush to come to Thailand. Transition periods are always messy.”

But at least the curfews, currently running from 11am – 3am in dark red provinces, are set to be lifted on October 31, according to the Thai PM this week.

And you’ll still need to wear a mask whilst in public at all times.

One of the sticking points, for some tourists anyway, is the ban on serving alcohol and the lack of nightlife. Whilst some vanguards have been opening up anyway, running the gauntlet with the local constabulary, the official line has been to keep Thailand’s nightlife, including its more lurid red-light offerings, closed.

But, even there, there’s a ray of hope with speculation that this ban will too be lifted on December 1.

The recent flurry of whittling away at Thailand’s Covid restrictions, and the almost daily announcements of new re-entry procedures, is a clear narrative that Thailand’s tourist industry can’t let another high season slip by with draconian border closures. The government’s trajectory is clear on this matter.

Even so, there is a long, long journey back for 10s of thousands of businesses that have been shuttered, some for more than 18 months. Most of these businesses will never open again. But, in time, new operators will come forward and pry open the doors as the travellers start heading back to Thailand. None of this will happen immediately, maybe not for many years.

So, will it be a dribble or a flood of new arrivals?

Whilst many of the tourist tzars in Thailand have been enthusiastically talking up business, almost since the day the country closed the borders back in April 2020, many of the more realistic pundits are saying Thailand’s tourism recovery could take up to a decade, assuming there are no new black swan moments.

Thailand’s department of optimism, rainbows and unicorns, aka. Tourism Authority of Thailand, have over-estimated and underdelivered on every single prediction they’ve made in the last 18 months.

Seemingly indifferent to the world public health emergency presented by the coronavirus pandemic, they’ve been locking horns with health officials for the past year to try and get travellers back into the country. More tourists to Thailand means they get to keep their jobs.

Eventually a compromise was met in the country’s most tourist-dependent economy, Phuket, and the Sandbox was born. It was launched on July 1, against the odds. Some 40,000 travellers took advantage of the Phuket Sandbox in its first 3 months, around half of those arrivals actual tourists.

Hailed a ‘success’ by the TAT and Thai government, the Phuket Sandbox has been of limited economic advantage to the southern island, outside of a few, select hotels and well-connected tour operators.

Other sandboxes have appeared, including Samui and Phang Nga. They’ve also had limited success and performed way below the predicted numbers from the TAT.

But, and this is an important ‘but’, the Sandbox experiment was the precursor to this November 1 phase of Thailand’s re-opening its borders to international travellers. It set standards and procedures which are now being rolled out for many more provinces, setting the stage for greater success as Thailand lurches towards the high season.

For people wanting to get their Thai ‘fix’, the Land of Smiles is spearheading a reopening to tourism compared to Bali, Cambodia, Vietnam, Malaysia, Singapore and other parts of Indonesia still in the early stages of their plans.

From November 1, in Thailand, the paperwork trail has been drastically reduced, the cumbersome Certificate of Entry is bering replaced by a digital Thailand Pass, airlines are announcing more flights direct into Phuket and Bangkok, and even unvaccinated tourists will be able to return, albeit with a 10 day quarantine. But the whole process is a huge advance on where Thailand was a year ago when everyone had to do a full 14-15 day quarantine on arrival.

So how ‘open’ is Thailand? Not fully open but the door is opening wide, quickly.