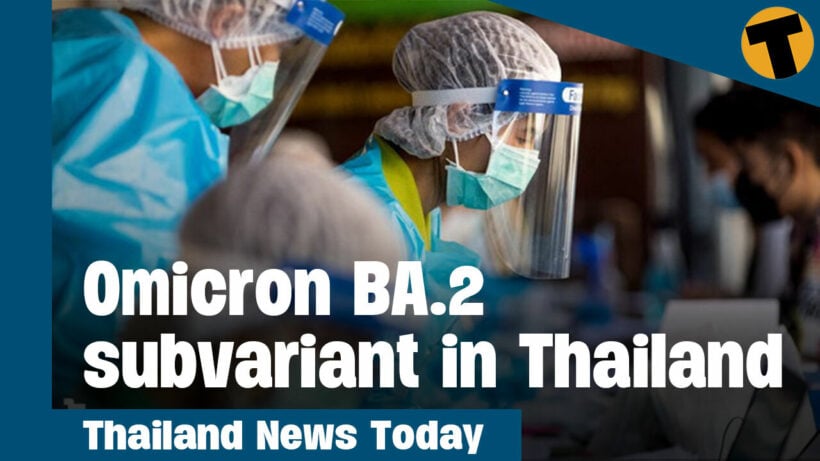 The subvariant is spreading across the globe with at least 40 countries reporting the mutated strain, while infections in Thailand involve both Thais and travelers from overseas.

When it comes to the severity of symptoms and transmissibility, ศุภกิจ ศิริลักษณ์ from Thailand’s Department of Medical Sciences says researchers have not found a clear difference between the common Omicron BA.1 variant and the BA.2 subvariant and the WHO has not declared BA.2 as a variant of concern.

BA.2 was first reported in India and South Africa in late December.

Following a meeting yesterday between Thai PM Prayut Chan-o-cha and the Saudi leader, Crown Prince Mohammed bin Salman, both countries have agreed to restore diplomatic ties in the near future and will exchange ambassadors as part of the agreement.

Things have been frosty between the two countries since a diplomatic spat over a jewelry theft in 1989. After a Thai janitor stole gems worth around 20 million US dollars from the Saudi royal family, shipping them home to Thailand, relations between both countries rapidly soured. Saudi Arabia downgraded diplomatic relations with Thailand in what was referred to as the “Blue Diamond Affair”.

Some of the jewels have never been recovered, including a prized blue diamond. To this day, the theft of the jewels remains one of Thailand’s greatest unsolved mysteries, with some of the kingdom’s top police generals implicated in the bloody trail that followed.

A year after they were stolen, 3 Saudi diplomats were murdered in 3 separate assassinations on the same night. This was followed by the mysterious disappearance of a Saudi businessman a month after he witnessed one of the assassinations. In 2014, a senior police officer and 4 others charged with the witness’s murder had their case dismissed by the Criminal Court.

In a statement yesterday, the Thai PM expressed his regret over the events, adding that his government was prepared to, “raise cases to the competent authorities in the event of new, relevant evidence”. Thai officials have been anxious to restore full ties with Saudi Arabia, with the 3 decades-long diplomatic standoff having cost billions of dollars in lost bilateral trade and tourism revenue, in addition to the loss of thousands of job prospects for Thai migrant workers.

Following the meeting, Saudi Arabian Airlines took to Twitter to confirm it will restart direct flights to Thailand from May.

Thailand’s health minister, Anutin Charnvirakul, has confirmed that the Narcotics Control Board has approved the removal of cannabis from the Category 5 list of controlled drugs.

According to a report from the Associated Press, Anutin says the drugs that remain on the list are opium, psilocybin mushrooms, and extracts of cannabis containing more than 0.2% by weight of THC.

According to Anutin, in order for the cannabis extracts to become legitimate, a regulation will need to be issued. The health minister says extracts can only be used for medical, industrial, health or food processing reasons.

In 2020, the production and use of cannabis for medical reasons was decriminalized in Thailand. This means most parts of the cannabis plant were removed from the list of controlled drugs. However, the seeds and buds, primarily associated with recreational use, were kept on the list. The new proposal will see all parts of the plant removed.

Anutin says anyone who wants to grow cannabis or hemp should wait for the new ministerial announcement, to avoid any confusion over what’s permitted. Growers must also register with the authorities and will need official permission to produce extracts from the plant. It’s understood a draft bill goes before parliament today, with the new law expected to come into force 120 days following publication in the Royal Gazette.

On a scale of zero to 100, with zero being highly corrupt, Thailand scores 35, according to a ranking on Transparency International’s Corruption Perceptions Index.

The average score of all countries was 45. Thailand’s ranking also dropped from 104 to 110 out of 180 countries, which means it’s become more corrupt in spite of the current administration’s numerous campaign promises.

Transparency International reported that the most corrupt country in the world was South Sudan, with Denmark, Finland, and Sweden being the least corrupt. To measure corruption, the organization collects data on each country from several reputable institutions, including the World Bank and World Economic Forum, and measures behaviors in the public sector that include bribery, diversion of public funds, abuse of public office power without consequence, and excessive red tape for increased opportunities for corruption.

Other Southeast Asian countries had a wide range of corruption levels. Singapore was ranked as the fourth least corrupt country in the world, scoring 85 while Malaysia scored 48. Cambodia, on the other hand, ranked as more corrupt than Thailand, in 157th place out of 180 with a score of 23.

Bangkok police investigating the speed of the motorcycle involved in a fatal collision with a woman on a zebra crossing say they expect to reach a swift conclusion.

Dr วราลัคน์ สุ-ภ-วัตร-จ-ริ-ยา-กุล, an ophthalmologist with the Faculty of Medicine at Chulalongkorn University, died when she was struck by the Ducati bike as she used a zebra crossing on Phaya Thai Road in the capital last Friday.

นรวิชญ์ บัวดก, an off-duty crowd control officer, has had 7 charges filed against him, including reckless driving causing death and failing to give way to pedestrians at a zebra crossing. Police are expected to submit the case to prosecutors by February 11, in order for them to proceed with criminal charges.

The bike has been taken to the Traffic Police Division for inspection where investigators will use CCTV footage to determine the speed นรวิชญ์ was doing when he struck the victim as she crossed the road.

Meanwhile, Norawich has swiftly departed the monkhood, just days after being ordained. News that the police officer had opted to enter the monkhood as a way of making merit for Dr Waraluck’s death sparked outrage among the public.

In other related news, a draft amendment to the Land Transport Act, proposed by the Royal Thai Police, has been approved by the House of Representatives and the Senate. The amendment will quadruple the fine for offenses such as speeding and driving through red lights to… 4,000 baht.

Tourists have hit back at the eastern province of Rayong after officials imposed a mandatory antigen testing requirement on all visitors.

According to a Nation Thailand report, all arrivals in the province must have a negative antigen test result, certified by a doctor, no more than 72 hours before arrival.

Tourists have expressed their anger on social media, with most saying they were unaware of the requirement prior to arrival. Once in Rayong, visitors are being ordered to pay 330 baht at a local hospital in order to be tested. This has led to most canceling their trips and turning around.

Nation Thailand reports that one of them is a group of 10 Swedish tourists traveling to Koh Samet. The group had traveled all the way from Surin province, nearly 500 kilometers away, in the north-east of the country. It’s understood that when they heard about the ATK requirement, they opted to change their plans, ditching Rayong. According to the group, the extra cost is unjustifiable, given that they’re all fully vaccinated and have already been tested several times before they could enter Thailand.

Rayong’s deputy governor claims the requirement has been in place since January 20.