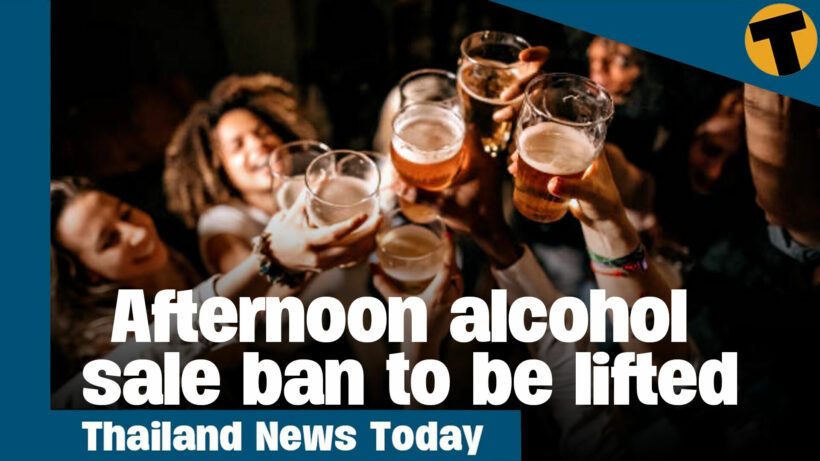 According to Tourism and Sports Minister Phiphat Ratchakitprakarn, restaurants and tourist attractions may also sell alcohol during this time, at the provincial governors’ discretion.

Phiphat stressed that lifting the ban could hugely boost Thailand’s tourism industry who have been bewildered by the 2 – 5pm ‘ban’ for many decades. The afternoon booze ban has confused both Thais and foreigners forever and explanations for the ban have been many, but not necessarily historically accurate. Suffice to say, depending on who you talk to, you will get many explanations, including from the officials and police who have overseen the ban for many decades.

He said that starting July 1, the country expects an estimated 25 – 30,000 international tourists to flock into the Kingdom. He expects to see at least a total of 7.5 million people by the end of 2022, and hopes to push that number up to 10 million. Piphat said that when the tourists arrive, he doesn’t want to ruffle their feathers with the annoying daily alcohol sales ban at certain hours.

He even bothered to chime in, saying quote “Imagine if some tourists are relaxing in their hotel, and they are suddenly notified that the alcohol is not allowed anymore from 2 – 5pm. This will surely ruin the country’s reputation.”

Like many things, I’m glad it only took them a few decades to figure this out.

Piphat reminded the public, however, that the lifting of the ban will not apply to convenience stores “at least initially, until more research is done”. No idea what that means either.

The conflict between Russia and Ukraine continues to be the excuse by utilities suppliers to raise energy prices.

The Energy Regulatory Commission today announced the power tariff would increase to a record high of 4.4 baht per kilowatt-hour between September and December, meaning Thai residents will face higher bills.

The ERC says the higher power tariff, which is made up of the base tariff and fuel tariff, is because Thailand needs to import more liquefied natural gas, which is costly but serves as a key fuel for electricity generation.

The fuel tariff is mainly determined by fuel costs, which are increasing as the Russia-Ukraine conflict continues, while the base tariff refers to the cost of power plants and distribution systems.

The Electricity Generating Authority of Thailand says its hands are tied and only has a limited budget to subsidise power bills. They agreed earlier to spend 80 billion baht, or 0.24 baht per unit, to subsidise the fuel tariff rate between May and August and added that without this financial aid, the power tariff would have soared to 4.4 baht per unit.

The ERC’s secretary-general says the global energy price fluctuations will remain as long as the war and sanctions by the US and its allies against Russia do not end.

Before the war, the liquefied natural gas price was 10 us dollars per metric million standard cubic feet per day. The price later increased to 20-30 dollars.

Gas makes up 60% of the fuel used to generate electricity in Thailand.

Supporters of Piyabutr Saengkanokkul are expected to be out in force today as the secretary-general of the Progressive Movement answers a charge of lese majeste at Dusit police station, in Bangkok.

The Deputy superintendent of Dusit police admitted he wasn’t sure how many people would turn out to support the controversial former MP but added police reinforcements are on standby if there is any trouble.

The 42 year old has spent a number of years examining problems related to Section 112 of the Criminal Code but this is the first time he has faced a lese majeste charge.

Historian Thepmontri Limpaphayom filed the charge accusing Piyabutr of insulting the monarchy after the latter suggested that the lese majeste law be improved to prevent law enforcement officers abusing their station to persecute people who freely express their views.

Rangsiman Rome, a Move Forward Party list MP, supported Piyabutr claim and said Section 112 of the Criminal Code should not be interpreted so broadly that it can be used as a tool for persecution, saying that, frequently, the definition of the law has been exaggerated to the full extent of the “imagination” of law enforcement authorities. Case in point is the charge on Piyabutr for criticising, not the monarchy, but the law itself.

Crafty anti-government protests hoodwinked police into thinking they were holding a “car mob” rally at the Democracy Monument while they gathered to demonstrate instead at Victory Monument, some 6 kilometres away and a 20 minute drive.

Knowing that police watch their every move on social media, dissident groups made a joint announcement on Thursday, June 16, on a Facebook page that they would be holding a “car mob” at the Democracy Monument in Bangkok at 4pm Sunday.

The protesters added they would then be moving onto PM Prayut Chan-o-cha’s house, at the 1st Infantry Regiment barracks on Vibhavadi Rangsit Road, before taunting police with a comment, “Please stay tuned. More surprises are coming!”

Officers yesterday assembled in preparation at the Democracy Monument at 3pm with about 500 officers, barriers to control the crowd, and a prisoner transport vehicle. But no one turned up.

The protestors’ plan worked a treat and they freely gathered at Victory Monument without being challenged, voicing their opposition to the government and its policies, including the controversial Section 112 of the Criminal Code or the lèse-majesté law.

At about 5pm the protestors made a move toward the PM’s house but police finally worked out their plan and blocked them at Din Daeng Intersection. The protestors moved from the road to the sidewalk and continued their activities until about 6.30pm.

Another group gathered at Victory Monument at 6pm to demand the court release suspects who were accused of violating the lèse-majesté law. The protest passed relatively peacefully.

No injuries were reported by either side.

An unidentified foreign man was stabbed near Walking Street in Pattaya in the early hours of yesterday morning. Despite bleeding heavily, the man refused to get his wounds treated at hospital. He refused to explain what happened or give personal details to the police.

Eyewitnesses told police that a physical fight broke out between two foreign men who had been arguing outside a bar near Walking Street in South Pattaya at around 1am yesterday morning. Then, one of the men pulled out a weapon “similar to a knife” and slashed the other man’s arms causing him to bleed heavily. The assailant fled the scene.

The injured man sought help at Walking Street where rescue workers at a tourist booth bandaged up his arms to stop the bleeding. When rescue workers offered to take him to the hospital, he refused to go. He also refused to file a police report or give any details about what happened to police.

The police said they will be checking all CCTV cameras to help them identify both foreigners. Police will summon both parties to the police station so they can investigate the incident further.

Airline passengers to reach 83% of pre-pandemic figures in 2022