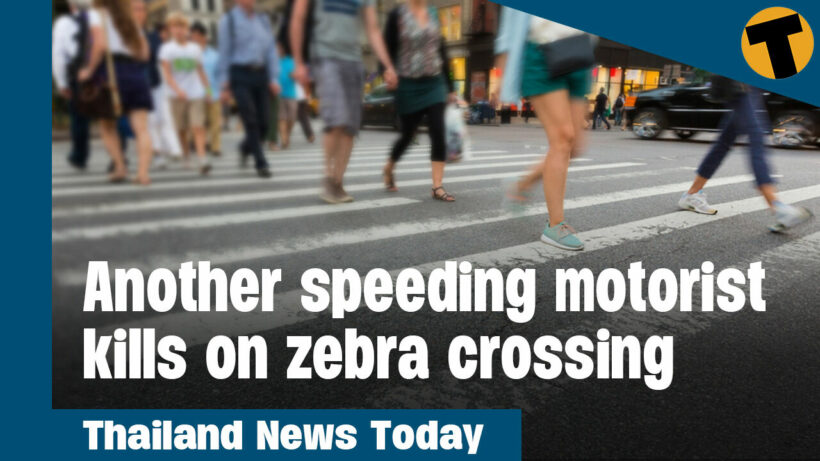 another pedestrian on a zebra crossing has been killed by a speeding motorist. Meanwhile, Rayong is all hands on deck in preventing an oil spill from reaching its beach, and how to get a year’s supply of free condoms. That’s all coming up in today’s program.

You’re watching Thailand News Today, bringing you the top headlines in Thailand and beyond. And in our first story,
Less than a week after a Bangkok doctor was killed by a motorcycle as she was using a zebra crossing, another pedestrian on a zebra crossing has been killed by a speeding motorist.

The incident happened on Wednesday evening, in the central province of Samut Prakan. 33-year-old Burmese national, Win Mar Soe, was crossing the road in the Bang Phli district when a pick-up truck plowed into her. The driver, Montree Poolslip, has been charged with reckless driving, with police saying he could also be charged with failure to stop for others.

According to the report, Montree says he was driving in the far right-hand lane when the woman stepped out from the central reservation. He admits he was driving too fast but says the pedestrian crossing was not very visible and that’s why he did not slow down.

Road safety, and in particular the safety of pedestrians, hit the headlines after a Bangkok doctor was killed by a motorcycle as she used a zebra crossing last Friday. Dr วราลัคน์ สุ-ภ-วัตร-จ-ริ-ยา-กุล died when she was struck by a Ducati bike being ridden by off-duty police officer นราวิชญ์ บัวดก.

The Metropolitan Police Bureau says it expects forensic results that will determine the speed at which นราวิชญ์ was traveling at the time to be released today.

Meanwhile, a draft amendment to the Land Transport Act has received approval by the House Committee on Transport.

นิกร จำนง, an MP from the Chartthaipattana Party who chaired the panel, says the amendment seeks to increase fines for traffic offenses and could be enacted by July. The amendment now goes before the Senate, which is expected to approve it by January 31. Once that happens, it will be returned to the House and will need to wait 120 days before being published in the Royal Gazette.

The amendment seeks to increase penalties for offenses such as failure to observe traffic signs, including pedestrian crossings, from 1,000 baht to 4,000 baht. It’s understood the committee is working on additional safety rules, in particular concerning speeding, and wants to see tougher laws around the use of large bikes.

Officials in Rayong are pulling out all the stops to protect the eastern province’s beaches from an oil spill 3 kilometers off-shore.

According to a Nation Thailand report, provincial governor ชาญนะ เอี่ยมแสง says the crude oil is currently headed for the beaches of แม่รำพึง and เขาแหลมหญ้า.

National Park officials are working alongside workers from petroleum and petrochemical firm IRPC and Star Petroleum Refining, owners of the undersea pipeline that has leaked thousands of liters of crude oil into the waters around Rayong.

Nation Thailand reports that local officials have placed a barrier line in the sea to hold the spill back from the shore and are confident the oil spill will not reach the popular tourist island of Koh Samet.

However, renowned marine expert, ธรณ์ ธำรงนาวาสวัสดิ์, says it’s likely that tar balls will head for the shore following the clean-up of the “first wave” of the spill, similar to what happened following a 2013 oil spill in the same area.

He said back in 2013, the second wave of tar balls came in succession for many days. Given the 2013 experience, the second must follow for 1 to 3 weeks.

The marine biologist adds that he still has hope that only the smallest amount of oil would make it to shore, given the ongoing efforts to stop it.

CBRE Thailand chief, รุ่งรัตน์ วีระภาคย์การุณ, says the low number of foreign arrivals means the sector continues to rely on local demand and must now adapt to these circumstances.

His colleague, รัฐวัฒน์ คูวิจิตรสุวรรณ, purchasing power is a significant factor and has been severely affected by the pandemic. In particular, the retail sector has been hit hard by government restrictions over the last 2 years.

รัฐวัฒน์ adds that Thailand’s economy relies on international tourism for its recovery and for now, the residential property sector has to rely on local demand. This in turn lowers sales as, unlike many foreign buyers, domestic purchasers are usually end users and take longer to decide. However, รัฐวัฒน์ says local demand remains strong in the case of some properties.

Niche markets, or those with solid demand drivers, like projects near universities or branded residences, will continue to perform despite the economic downturn, he says, adding that resort homes will still be attractive to local buyers, but the price must be right.

Former employees from an insurance firm bankrupted by Covid have rallied outside the Office of the Insurance Commission, demanding overdue salaries and severance be paid.

Around 300 employees of The One Insurance were made redundant when the firm collapsed, but have yet to receive payments and other compensation owed to them.

One labor activist said it has now been nearly 2 months since the firm closed and former employees still have yet to receive what they’re owed. The law dictates that the Non-Life Insurance Fund must pay overdue salaries to workers who’ve been laid off, along with severance pay and other benefits. These are estimated at around 82 million baht, plus 15% interest.

The activist says many former employees are now in dire financial straits, due to the company’s sudden collapse, which gave them no time to prepare. It’s understood that some workers are over the age of 50 and fear they will face discrimination when applying for new jobs.

The pandemic has driven many Thai insurance companies to the brink, as a result of compensation claims arising from holders of “Found, Paid, Done” insurance policies, which offered coverage in the event of a Covid-19 infection. The One Insurance had all its finances exhausted by the claims.

At the time, the OIC got involved and ordered the firm to stop selling any more policies and to concentrate on solving its financial difficulties. However, the Finance Ministry ended up having to revoke the company’s license, which then led to mass redundancies.

Yesterday, the former employees involved in the protest said their situation is being ignored and they may stage an all-night vigil in front of the OIC if their demands for compensation and overdue salaries are not met.

In a bold move for conservative Thailand, the National Health Security Office is providing free birth control pills and condoms to young people over the age of 15.

A new programme by the NHSO is targeting teen pregnancy and the spread of sexually transmitted diseases in a bid to encourage safe sex, especially among Thai youth.

The Deputy Secretary-General of the NHSO said the programme will begin on February 1 when it begins handing out free birth control pills. While the programme is targeted at teenagers and youth, the birth control pills will be provided to Thai women between the ages of 15 and 59 years old. Women can claim the benefit up to 13 boxes per year but can request up to 3 boxes of pills at a time.

Women will be able to collect the free birth control at facilities that are associated with the NHSO including medical clinics, private hospitals, pharmacies, nursing clinics, midwife clinics, and primary care units.

The service is coordinated by the “Pao Tang” mobile application where users can click on the health wallet to schedule a location and date to pick up the pills. In the rare case of a teenager who is sexually active and not on a mobile device, a woman may present their ID in a participating venue to receive the benefit.

The programme also intends to make condoms free and readily available to promote safe sex, especially among young people in Thailand. The condom rollout is expected to launch in April and will provide 10 free condoms per week to anyone over the age of 15 who requests them. The service will be available every week so, in theory, a very active person could collect 520 condoms per year for free.

The condoms can be ordered by adding the NHSO’s account on the LINE app. Those wanting to collect their free condoms will then be able to scan a QR code at participating venues to confirm with the NHSO and receive the benefit. Service locations can be found on the NHSO’s website.

For those concerned, condoms will be available in
49-millimetre,
52-millimetre,

Woman steals 10,000 baht in lottery tickets from vendors in Isaan