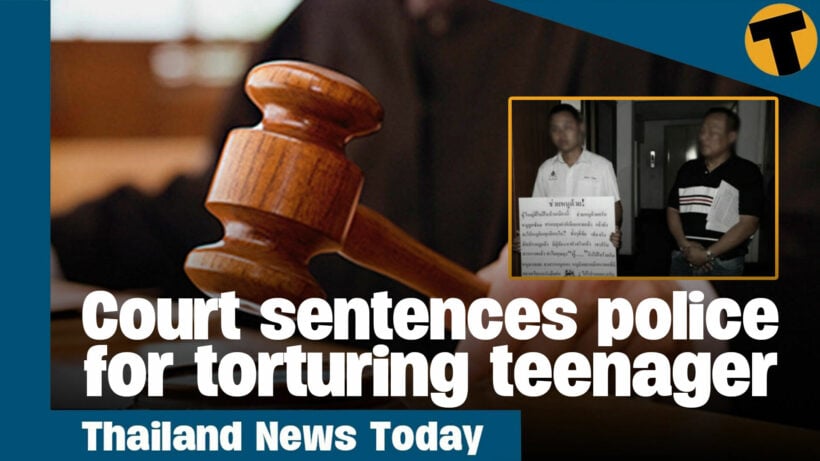 South Bangkok Civil Court yesterday ordered The Royal Thai Police to pay about 3.4 million baht in compensation for the false imprisonment and brutal torture of a teenager in 2009.

During the investigation, police tried to extract a confession from the victim, who was 18 at the time, by putting a plastic bag over his head causing suffocation and resulting in convulsions. Sound familiar? The police also threatened to kill the boy and dump his corpse in the เอาอีตี้ mountains if he didn’t confess to the crime. In other words, they were willing to commit murder over a theft crime.

But it turns out the police arrested the wrong man.

After 8 years of struggle trying to find the cash to hire a lawyer, Ritthirong filed a civil suit with the Southern Bangkok Civil Court against the Royal Thai Police in 2017 and demanded the police pay him compensation for damages and delete his criminal record from their database.

Ritthirong Chuenchit sued the 7 police officers who took part in his brutal torture for physical harm, mental abuse, and damages to his reputation and honour.

The court saw pictures of the plaintiff’s wounded body and heard the testimony of a doctor who examined ฤทธิรงค์. The doctor confirmed there were bruises on both wrists, an abrasion wound on his upper left abdomen, and damage to the upper left abdomen, which took three days to heal.

At the time of arrest, the teenager had received an outstanding student award from the Siam Motors School of Music, in Prachin Buri. He had also applied to study at the Police Cadet Academy.

Pol Lt Col Wachiraphan Pothirat was found guilty of unlawful detention and abuse of power and was sentenced to 2 years in prison and fined 12,000 baht. Wachiraphan’s confession to the crime saw his sentence reduced to 1 year and his fine cut to 8,000 baht.

Locals from นครทอง Village in theRacha Thewa districtof Samut Prakarn, the central province of Thailand, have made asked the media to highlight the provincial government’s neglect of their roads in favour of pretty street lamps.

Samut Prakarnprovincial officers continue to ignore residents’ calls to improve the district’s dangerous roads and thoroughfares. The road construction, which was expected to be finished 3 months ago, is never-ending while the project to install fancy, pricey street lamps goes on.

Samut Prakarnprovincial officers are still under investigation by the Office of The National Anti-Corruption Commission but a verdict has yet to be concluded. As a consequence, natives continue to grow restless.

Pictures of the district’s decorative street lamps are often shared on Thai social media. They usually feature mythical beings combined with traditional Thai figures, like Kinnaree, which is half woman and half bird. But the beautiful lamp posts are a stark juxtaposition to the area’s unkempt, dangerous roads.

Other local governments in Songkla, Sakaeo, and Mukdaharn,are all under fire over the same issue.

A number of the district’s street lamps are solar equipped, which should help save on the government’s electricity budget, but many see it as a false economy because each lamp post is reported to cost almost 100,000 baht.

The road to the village is about 6 metres in width and 617 metres in length. The budget spent on the road improvement project, which began in March, is 7.4 million baht. There are 44 Kinnaree street lamps along that same stretch of road, which cost 94,000 baht each, totalling about 4.2 million baht. A quick search on theBoon Thawornplatform reveals you can buy a similar street lamp for about 13,000 baht.

A representative from Nakhon Thong Village told the media that he wanted officers from the Racha Thewa district to care more about its residents.

The Chief Executive of the Sub-district Administration Organisation refused a request by the media for an interview, and assigned the Director of the Provincial Public Work Division to provide more information.

The director said the construction couldn’t be completed according to the schedule because there is a problem with the locality’s waterworks system. So, the district office would extend the construction schedule for another 3 months.

Four hundred new pedestal drinking fountains will be reinstalled on Bangkok’s pavements. Dare we drink from them?

In December last year, the Bangkok Metropolitan Administration assigned the Metro Waterworks Authority to demolish 400 public drinking fountains from the city’s paths, which were first introduced in 1999, because they were old, creaky, and lacked maintenance.

Metropolitan pedestrians complained to the authorities that they were unable to use the fountains because they were unhygienic, the water was contaminated, and they caused an obstruction to passersby.

Chadchart says the MWA insists the city’s tap water is drinkable and drinking fountains should be installed to prove the quality of tap water and to reduce the use of plastic bottles.

Chadchart says he has listened to all the complaints and emphasised the fountains would not cause an obstruction, and the water would be clean and drinkable.

The Director-General of the Health Department, Suwanchai Wattanaying charoenchai told the media that 20% of tap water in Thailand was drinkable, 55% needed to be boiled before drinking, and the rest wasn’t fit to drink because the amount of iron, manganese, fluoride, and chloride was below standard.

The Thai PM wants to cement Thailand’s reputation as the biggest SE Asian hub for car manufacturing, and electric cars too. Currently Thailand is the world’s 10th largest manufacturer of vehicles.

Now Thailand is aiming to assemble electric vehicles, aka. EVs, and parts. domestically within the next year. This accelerates the earlier target of 2024.

The PM says that the government is “speeding up promotion of EV assembly in Thailand” and plans to kick off full EV-builds in the Kingdom during 2023.

Speaking at the Federation of Thai Industries yesterday, the PM said that significant parts used in the manufacture of EVs will all be manufactured in Thailand over the next few years.

Already Chinese manufacturers MG and GWM (who currently assemble the Naval H6, Jolion and Ora brands in Rayong, Thailand) have a strong EV presence in Thailand and have become instant hits with the Thai car-buying public.

Honda are also building an electric hybrid version of their popular HRV SUV model at a plant in Ayutthaya. Chinese EV manufacturer BYD is also preparing to set up a new manufacturing plant in Thailand where it will make electric cars for right-hand-drive markets including the UK and Australia.

Prayut noted that EV development, of both cars and parts, will be a key part of the Thai government’s ongoing efforts to restructure the Thai economy “to be more high tech”