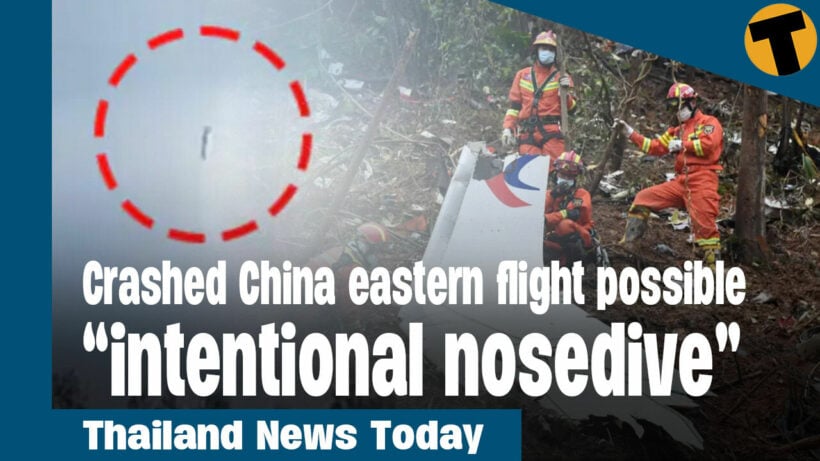 Investigators are now examining further if the crash of China Eastern Airlines 737-800 on March 21 was indeed due to “intentional action on the flight deck”. The early reports say that there is, so far, no evidence of a technical malfunction.

The Wall Street Journal reported this week that flight data from one of the two “black boxes” on the Boeing jet indicated that “someone in the cockpit intentionally crashed the plane”. The comments were made by people the WSJ cited as “familiar with the preliminary assessment by US officials”.

US National Transportation Safety Board officials have been working with engineers from Boeing and investigators from the Civil Aviation Administration of China since the crash.

Boeing, the US manufacturer of the jet, has so far declined to comment on the early leaks and, instead, referred all questions to the Chinese regulators. At this stage, the CAAC, leading the investigation into the crash in southern China, haven’t made any official comments on the matter.

Importantly, for Boeing, if the early reporting is correct, it would indicate the aircraft manufacturer bears no primary responsibility for the crash. The latest model of Boeing 737s, the fourth generation Max range, has dragged the manufacturer’s reputation down since two high profile crashes of 787 Max jets in 2018 and 2019 which were eventually traced back to an errant software that ‘took control’ of the planes in the two crashes. The China Eastern 737 that crashed was from the earlier third generation model, a 787-800.

The Boeing 737-800, was flying from Kunming to Guangzhou and crashed into the mountains of the Guangxi region. Just as the plane was starting its decent from a crushing altitude of 32,000 feet, the plane plunged suddenly, and steeply. Then, despite a brief respite where the plane appeared to regain some altitude, it started plummeting again, eventually plunging almost vertically into the mountains, killing all 132 people on board.

China’s aviation sector has vastly improved safety standards over the past 2 decades, and has been recognised as having an excellent safety record during this time. The incident was mainland China’s deadliest aviation disaster in 28 years.

Thailand’s flag carrier airline declared a net loss of nearly 3.4 billion baht on revenue of 11.2 billion baht in Q1, an improvement on the 11.2 billion baht net loss from the same period last year. On the positive side, the company also noted a 155 per cent year on year increase.

Thai Airways’s financial report unveiled operational revenue had increased by 6.8 billion baht compared to the same period last year. On the down side expenditure of 14.4 billion baht increased, up 3 billion baht year on year, exposing a loss of 3.4 billion baht.

Higher fuel costs were elevated because of the Russia-Ukraine conflict and the ongoing pandemic continues to weight heavily on the airline. Fuel expenses increased almost 5-fold to 4.2 billion baht. Thai Airways was forced to enter a court-supervised rehabilitation programme in 2020 because of the pandemic, after posting its worst-ever net loss of 141 billion baht.

But the company bounced back from that setback a year later returning a net profit of 55.1 billion baht. It was Thai Airways’s first net profit in five years following a company overhaul of its infrastructure. The Thai government’s easing of Covid restrictions, and popular programmes such as the Thai Pass, has opened up the country to more tourists resulting in busier air traffic and increased revenue.

The Thai Airlines Association says that in the first 4 months of this year, domestic flights have returned to nearly 100% of their pre-pandemic level. However, international flights have still only reached 20% of pre-Covid-19 levels.

TAA president, Putthiphong ปราสาททองโอสถ, says the lifting of some travel restrictions has led to an increase in passenger numbers, but adds that it will take years for the aviation industry to return to pre-pandemic levels.

According to a Nation Thailand report, Putthiphong says that this year, Thailand’s airlines are expected to concentrate on short-haul destinations, including Singapore, Vietnam, Cambodia, South Korea, Japan, and the Maldives. Additional long-haul flights may be added from 2023. This is more likely to happen after the Thailand Pass is cancelled.

However, the opening of international flights still depends on the screening policy of destination countries, especially in major markets such as China, India, Japan, Europe, and the Middle East.”

On May 1, Thailand ditched its Test & Go entry scheme, which had required all international travellers to undergo PCR testing on arrival and wait in a SHA Plus hotel room for the result. They were also required to have Covid insurance coverage of at least 50,000 us dollars, which has now been reduced to 10,000.

Since the cancellation of Test & Go, visitor numbers to the kingdom have increased, but international passengers are still required to go through the Thailand Pass registration process and have proof of vaccination. Unvaccinated arrivals who do not take a pre-departure PCR test will be required to quarantine in a hotel for 5 days.

Putthiphong says that while the overall situation is improving, most people are now vaccinated, and several countries are lifting entry restrictions, it could take years for the airline industry to recover to the same level as before the outbreak.

From today, people in Indonesia are no longer required to wear masks outdoors, as Covid infections continue to fall.

According to a Reuters report, Indonesian President Joko Widodo says “the pandemic is getting more and more controlled”, removing the need for an outdoor mask mandate.

However, he goes on to say that a mask mandate on public transport and other indoor locations remains in force, adding that the elderly and people with underlying health conditions or coughs should also continue to wear masks outside.

In addition to lifting the outdoor mask mandate, Indonesia will ease testing requirements for international and domestic travellers, although the president has not given any further information at this point.

Infections in Indonesia have continued to fall since the peak in February, but the government remains vigilant over a potential surge following the mass exodus for the recent religious holiday.

The country is following in the footsteps of Singapore, South Korea, and Malaysia in dropping the outdoor mask mandate as cases decline. Could Thailand be next?

As part of a push to draw more Middle Eastern tourists to Thailand, tourism officials visited Saudi Arabia on May 15-16 in a roadshow.

There, the Tourism Authority of Thailand signed a memorandum of cooperation with Almosafer, the biggest online travel agency in Saudi Arabia and Kuwait.

The TAT also signed an MoC with Saudia, Saudi Arabia’s flag carrier, to promote a global campaign as well as luxury and wellness products. At the roadshow, Thai operators received 128 business appointments on average, estimated to generate 1 billion baht this year. Thailand now also plans to set up halal food centres in every province in order to promote halal tourism.

This news comes after the TAT set a goal in March of attracting200 to 500,000 Middle Eastern touriststo Thailand this year. Thailand is especially seeking to attract Middle Eastern tourists for medical and wellness tourism. Last week, the TAT brought 24 operators to the Arabian Travel Market of 2022 at the Dubai World Trade Centre, hoping to attract family and medical tourism.

Thailand’s tourism and sports minister said Thailand has to start promoting to the Saudi market to up travel demand, which should hit its peak in July and August.

Thailand and Saudi Arabia restarted direct flights with each other in February after decades ofhostile relations. When thefirst flight of Saudi touristsarrived in Bangkok, the Tourism Authority of Thailand greeted them at Suvarnabhumi Airport with traditional performances and a water salute.