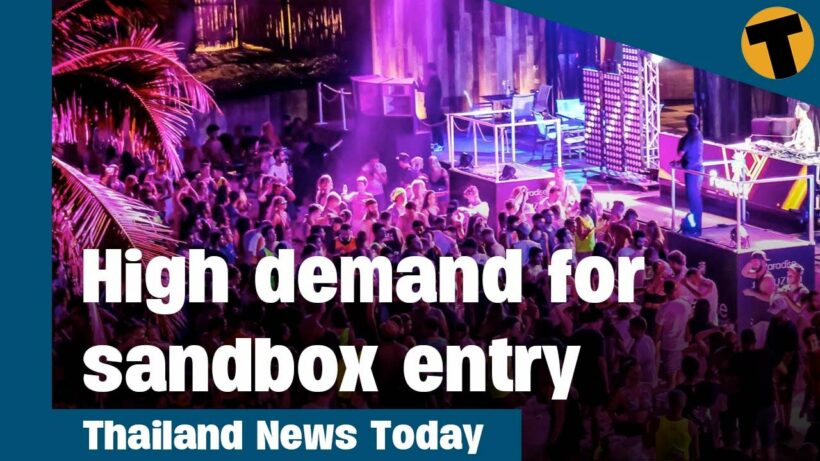 In today’s news, Phuket is proving popular with foreign tourists, social media uncovers the aftermath of the Full Moon party, and a survey reveals the pandemic is taking a big toll on mental health. All this is coming up in today’s program.

The president of the Phuket Tourism Association says the island is proving popular with foreign tourists, receiving 4,000 applications a day through the Thailand Pass system.

ภูมิ กิตติ์ รักแต่งาม says most of those visitors are from Germany, Russia, Kazakhstan, the United Kingdom, the United States, and France.

But as the island comes back alive, cases are also surging, with new infection numbers rising from 238 last Wednesday to 742 on Sunday.

Most infections are cases of local transmission, while around 1% of foreign tourists are testing positive on arrival, while 4% are found to be infected after the second test.

According to Bhummikitti, between 70 and 80% of international arrivals who test positive are infected with the Omicron variant, However, 90% of those cases only exhibit mild symptoms and he says they can self-isolate in their hotel rooms, provided the properties are SHA Plus accredited.

Bhummikitti added that authorities are setting up other facilities in the event that hotels do not have isolation rooms for infected guests.

With more tourism comes more Covid cases. That’s just how it’s been for the past 2 years, yet some people are still outraged by this new reality. Some people who went to the Full Moon Countdown event on Koh Phangan said they tested positive for Covid, and some of their peers are very triggered.

One foreigner is in the spotlight after she posted a video on TikTok showing three antigen Covid-19 tests, all with positive results. The video read “you’re probably wondering how I ended up in this situation,” and then flashed to videos of her partying in crowds at the 2022 countdown event by Haad Rin’s Drop In Bar.

After criticism, with many saying she was irresponsible, the traveller wrote in a pinned comment saying “everyone who goes to such parties is aware of the risk! It’s my own fault!! Stay safe ppl.”

Some people even commented on the video saying they were at the Full Moon Countdown and also tested positive.

Another girl who was also at Haad Rin’s Drop In Bar, although unclear which exact night, posted a video of her positive test result and then videos of the party at the beach bar, which was packed with people around a fire jump rope.

While there has been hearsay that many people tested positive for after the Koh Phangan Countdown Event, the local health department has not officially reported a cluster. Today, the Surat Thani Provincial Health Department reports 3,630 active Covid-19 cases in Koh Phangan and neighbouring islands of Koh Samui and Koh Tao. These infections have been reported to or detected by health officials and confirmed with PCR tests.

Hundreds of expats and foreign travellers flocked to Koh Phangan for its famous countdown event. The Raja Ferry at Surat Thani’s Donsak pier was packed with so many people headed to the island that around half of the passengers were sitting on the floor. There was no room for social distancing, and inside the ferry, there was little air ventilation. Proof of vaccination was not required and there was no Covid check to get on the island, even though there has been a check in the past.

But it wasn’t like this was a huge surprise to the authorities either. On the night of the massive New Year’s event on Haad Rin, officials from the Ministry of Public Health were at the main entrance to the beach, requiring partygoers to show their vaccination records or their Thailand Pass.

The Thai government basically gave venues across the country a free pass for the night of New Year’s Eve, allowing restaurants and approved venues to serve alcohol until 1am on January 1.
————-

The Thai government has introduced new regulations that require those who apply for Thai citizenship to pass a new Thai language test while the fees have also doubled.

Up until now, Thai citizenship was based on regulations in place since 1967, which required applicants to speak and understand Thai. The new rules mean they must sit a Thai language test or have certificates from the Education Ministry that show they completed at least primary education in Thailand.

Applicants who live in Bangkok can apply via the Department of Provincial Administration, while people outside the capital can submit their request at the provincial hall. Applicants living overseas should contact their nearest Thai embassy or consulate.

The application fee has also been doubled from 5,000 baht to 10,000 baht for adults and from 2,500 baht to 5,000 baht for children. There is also an additional charge to receive the citizenship certificate and that has been increased from 500 baht to 1,000 baht.

A Covid-19 vaccine developed by Taiwan’s Medigen Vaccine Biologics has been recognised by the Thai government, allowing those who have been fully inoculated with the Medigen vaccine to enter Thailand under the Sandbox travel scheme,

The Sandbox program allows vaccinated travellers from overseas to roam freely in Phuket, Phang Nga, Krabi, or the Surat Thani island for seven days rather than undergoing a strict quarantine period.

Taiwan’s FDA approved the Medigen vaccine for emergency use and the rollout of the vaccine started on August 23. The Taiwan-based company is now seeking approval from the World Health Organisation for emergency use authorisation.

A recent survey shows that many Thais are enduring suicidal thoughts, depression, and burnout as a result of the pandemic.

อัมพร เบญจพลพิทักษ์ from the Department of Mental Health says the online poll assessed the mental health of over 2.5 million people in Thailand. A Thai PBS World report carries a breakdown of some of the results.

Over 8% of respondents, or around 216,000 people say they’re suffering from stress.

Amporn has expressed concern about the findings, saying sufferers are in need of mental health care. Furthermore, she says around half of those who’ve been infected with Covid-19 are still dealing with the long-term toll on both their physical health and mental wellbeing 3 months after recovery. She says those too are in need of mental health care, with Amporn adding that this group has been found to be at risk of suicidal thoughts.

A post on Facebook looking for an escort in Thailand has a very special request… He wants the woman to be infected with Covid-19.

The post reads “Infected only. Work starts at 10pm. The client wants to be positive.”

It says the client has a budget of 3,000 baht to 5,000 baht with a 600 baht commission for a broker. The post says the woman must have tested positive for Covid and show that they have two lines on the ATK test.

It also added that the position is open for one who can use illicit drugs to make the Covid party more entertaining. The post wrote “EN up” which is code for there will be drugs, usually ecstasy.

For Thai models and escorts, parties and are categorised depending if drugs or sex is involved. “EN” means entertainment and “EN V” means sexual services are involved.

The post was widely shared by Thais on Facebook, because of its peculiar request. A fetish? Maybe. But some speculate that the man might be trying to get infected to claim money from his health insurance. Others say they hope it’s just a joke.