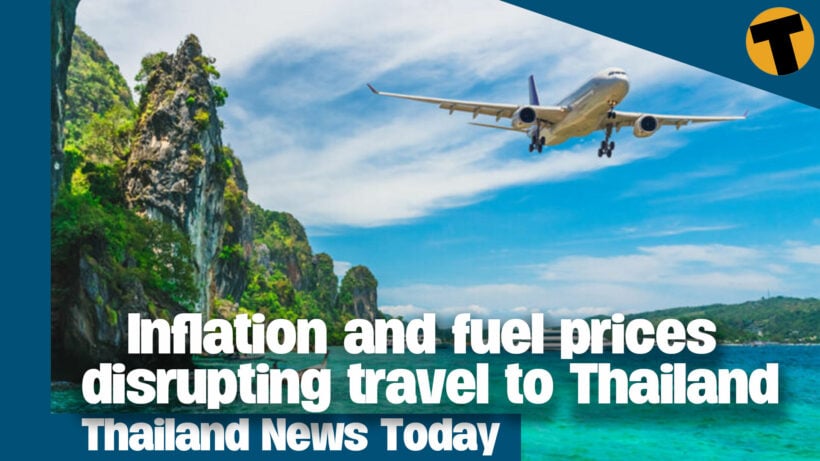 Thailand is counting on the approaching high season to bring in up to 10 million tourists by the end of 2022 but inflation and the rise of fuel prices has resulted in fewer international flights arriving.

There are also problems in both Europe and the US with flights being cancelled or with long delays. Numerous airline companies say they are hesitant to add more routes or increase the number of flights as there are many global challenges affecting their revenue and ability to increase frequency of flights.

They cite higher operating costs caused by rising oil prices and longer flights due to the detours to avoid the war between Russia and Ukraine.

According to the Tourism Authority of Thailand Governor Yuthasak Supasorn, there are only 30% of international flights flying into The Land of Smiles compared to life before the pandemic. The TAT and Tourism and Sports Ministry have been touting a swift recovery of Thai tourism but are now admitting the challenges to international arrivals which are out of the control of Thai authorities.

A statement read “Tourists face higher travel costs, particularly from inflation and airfares, which have increased by 20-40%. The TAT is working with airlines, both scheduled and chartered services, to roll out joint promotions to help offset those costs. However, for Europe’s summer season in August, it might be too late to prepare any stimulus packages.”

The goal should be at least 55% of international flights, and this could be possible once Air Canada and Korean Air have confirmed their plans non stop flights.

From December until April 2023, Air Canada plans to fly its first direct flight between Vancouver and Bangkok with four flights per week using Boeing 787 planes. During its recent trip to Seoul, Korean Air promised the TAT that it will start flying to Thailand again in the fourth quarter.

Both Chinese and Russian travellers will be thin on the ground for at least the rest of 2022.

To make matters worse for the country’s PR, an unvaccinated tourist en route to Thailand was turned away at the check-in desk at Manchester Airport in England after an airline did not get the memo about Thailand’s updated entry restrictions.

Thailand’s CCSA reports that unvaccinated tourists can either show proof of a negative test within 72 hours prior to arrivalORsimply take an ATK test upon arrival.

The CCSA said that randomised checks will be undertaken at Thailand’s airports to check whether travellers have either proof of vaccination or proof of a negative pre-arrival test. Anyone without the documents may still gain entry into Thailand, but will be subject to an on-arrival ATK test, according to the CCSA.

One unvaccinated traveller arrived at Manchester Airport onJuly 2, expecting to fly to Thailand via Dubai and test upon arrival at Bangkok’s Survarnabhumi Airport. However, at the check-in desk, Emirates staff asked for either proof of vaccination or proof of a negative Covid-19 test.

The problem is, despite Thailand’s CCSA and TAT confirming the scrapping of pre-arrival testing regardless of vaccination status, the UK government’stravel adviceon Thailand’s entry restrictions says you must show a negative test result prior to boarding the plane.

So just in case whichever airline you are flying with hasn’t caught wind of Thailand’s updated entry restrictions, the safest thing to do is to gain a negative ATK or PCR test result administered by a medical professional within 72 hours of arrival in Thailand, even though Thailand doesn’t require it anymore.

Thai and Cambodian officials have been meeting with their Burmese junta buddies in Myanmar this week to discuss how to suppress civilians…I mean establish peace in the region.

The Thai delegation met with the Burmese government as aBurmese fighter jetwas detected yesterday flying over Tak province in northern Thailand. Thailand’s PM Prayut Chan-o-cha said Mynamar has now apologised to Thailand for the incident. Prayut said the incursion was “not a big deal.” The Burmese military told Thailand’s military that it was an accident, and the jet only crossed a small distance into Thailand.

A Cambodian delegation has also been meeting with the Burmese junta this week. The country’s foreign minister Prak Sokhonn has made his second visit to Myanmar as a special envoy of ASEAN.

The Cambodian envoy wrote a letter to the Burmese military requesting that ousted leader Aung San Suu Kyi be allowed to return “to her original place of detention.” However, the UN and human rights groups have demanded that all political prisoners in Myanmar be unconditionally released. Prak Sokhonn was told that he would not be allowed to meet Aung San Suu Kyi on his 5 day trip, which ends today.

ASEAN has established a “5 Point Consensus” on Myanmar. The demands are an immediate halt to violence, engagement between all parties involved, the designation of a special ASEAN envoy, humanitarian aid, and a visit to Myanmar by the special envoy and a group to meet with all relevant parties. So far, the Burmese junta government has made no progress on these “demands”…probably because…there seems to be no consequences.

If, like many, you doubted the decriminalisation of the happy plant as too good to be true, the backlash that has already begun will be no surprise. Here’s the latest on this trainwreck.

PM Prayut Chan-o-Cha has alreadycurbed patentsto prevent foreign market domination and banned its use onmilitary sites. Meanwhile, officials have shut down joint selling vendorsKhaosan Roadafter they discovered that people were buying them for recreational pleasure, not for medical treatment. What did they expect?

And astonishingly, the Thai Parliament is yet to discuss a Bill to legislate controls in the cultivation and use of the plant and its products at this time, leaving a legislative twilight zone and a current ‘free for all’.

Now the government is under pressure to ban young people from access to the plant and regulate recreational use after 33 organisations joined together to submit a letter calling for action yesterday. The letter was submitted by the director of the Baan Kanchanapisek Vocational Juvenile Training Centre for Boys.

She argues that the lack of regulation puts at-risk groups like teens and children, as well as pregnant women, in harm’s way.

The group demands strict regulations on the use of the happy plant either for processing, consumption, distribution, or advertising. They also want the law to restrict access to the plant among youths under 20 years of age, and to not allow people to consume it and drive.

Pack your suitcases and open your chakras as Koh Pha Ngan has been ranked as the top destination for a workation.

The popular tourist island in the southern Thailand province ofSurat Thaniranks number one out of 16 choices gathered and analyzed by William Russell, a prominent health, life, and income insurer.

The list was calculated by considering 4 main factors that are important for somebody trying to have a holiday while still getting some work done: accommodation costs, internet speed, safety, and of course, fun. Koh Pha Ngan, known for its new age spiritualistic and hippiesque northern shores as well as the world-famous wild and drunken Full Moon Party.

A government spokesperson celebrated the top ranking as a chance to talk up the government’s work in bringing back tourism to Thailand. They must have forgotten that they were the ones who banned travel in the first place.

Koh Pha Ngan achieved the number one workation ranking by being highly rated in both safety and fun.