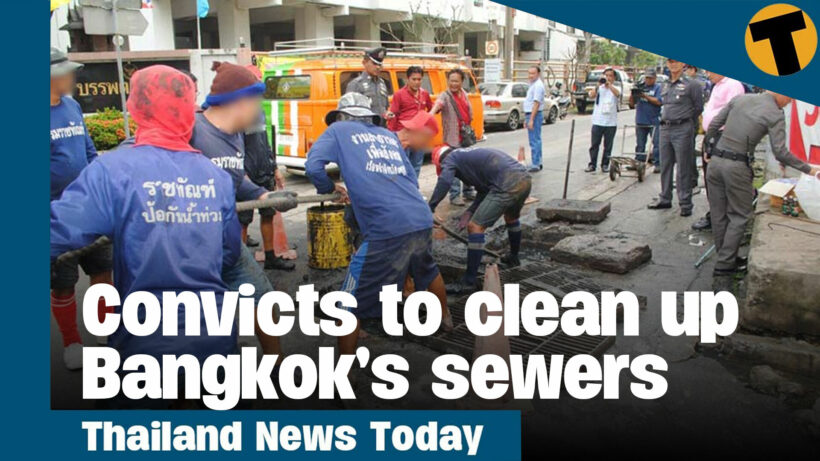 Governor-elect Chadchart Sittipunt made over 200 pledges prior to his landslide election victory last Sunday. And when the Bangkok governor-elect vowed to drain the swamp, he meant it quite literally.

The 56 year old’s four-year term as governor began in earnest this week and he’s announced a program to use criminals to clean the city’s sewers.

He even landed a blow by saying “convicts have done a better job at cleaning the sewers than the many private companies tasked with the job.”

“It’s constructive for agencies to be joining hands. This creates opportunities for convicts so they can save some money for when they are released.”

The Bangkok-born politician thanked Justice Minister Somsak Thepsutin for seeking to work with the Bangkok Metropolitan Region and said he plans to visit the justice minister after he formally takes office next month.

Somsak instructed the Corrections Department to seek Chadchart’s permission to use the city’s criminals to help minimise flooding in the capital.

Bangkok’s criminal fraternity were contracted to clean the sewers prior to the Covid-19 outbreak in 2020. But previous governor, Aswin Kwanmuang, declined to grant them permission to undertake the work, fearing the convicts couldn’t finish the job due to restrictions placed on their movements during the height of the pandemic.

Bangkok’s network of sewer and drainage systems spans more than 6,000 kilometres, and cleaning them requires a lot of manpower and budget.

The Office of Fuel Fund plans to borrow 20 billion baht to top up the country’s oil price subsidies as residents and different departments are being increasingly affected by the rising oil price.

The Director-General of the Fuel Fund Office, Wisak Wattanasup, said the fund was negotiating with the Government Saving Bank and Krungthai Bank to obtain the first batch of loans valued at 20 billion baht. Wisak noted that the fund had a backup plan if those 2 financial institutions were unable to furnish the loans. But the director was confident that the fund would be able to sort out the loan before the end of this month.

The Head of the Policy and Strategy Department, the Fuel Fund Office, Ponchai Jirakunpisarn, insists that the fund borrowed money only as needed and considered the loan amount according to the ability to practically service the loan.

Ponchai explained that the Fuel Fund had a remaining budget of about 13 billion baht, so the fund didn’t plan to use all 20 billion baht immediately after getting it. The funds are being borrowed “just in case the fund was running out of budget”.

The Thai government has been subsidising the retail price of diesel by up to 10 baht a litre, artificially capping the diesel prices in Thailand. Ponchai added that the reduction of the excise tax for diesel at 5 baht per litre announced by the government is also reducing the fund’s subsidy burden and budget.

A man who posted a threatening message on Twitter aimed at the twin daughters of Thailand’s Prime Minister Prayut Chan-o-cha has been sentenced to 5 years imprisonment with no parole.

Yesterday, Southern Bangkok Criminal Court found the man guilty of “publicising a crime” and for breaking the Computer Crimes Act because of a Tweet he posted in March last year.

“If anyone finds Prayut’s daughters anywhere, don’t forget to rape them.”

PM Prayut filed a case against the author of the tweet at Nang Loeng Police Station in Bangkok on March 23 last year, under the premise that the Tweet broke both the “Computer Crimes Act” and Section 85 of Thailand’s Penal Code on “Publicising a Crime,” which states…

“Whoever propagates or publishes to the general public to commit an offence and such offence is punishable with imprisonment of no less than six months.”

At first, Wuttichai told police he was hacked and it wasn’t him who wrote the Tweet aimed at twin sisters. However, when police searched his accommodation and looked through his Notebook device they found no evidence that he was hacked.

Wuttichai ultimately confessed to the crime, and the court finally sentenced him to 5 years imprisonment with no parole yesterday, more than a year after the Tweet was posted. The court sentenced him to 7.5 years at first, but considering he had never committed a crime before, they reduced his sentence by 2.5 years.

In somewhat related news, Thais in Japan gathered in front of a hotel where Thai PM Prayut Chan-o-cha was staying to demand that the PM resign and release the young political activists out of jail.

PM Prayut is in Japan to join the 27th International Conference on the Future of Asia or Nikkei Forum, held until the end of today. Yesterday, around 3 pm, the United Democracy Against Dictator Japan group posted a video when the group members were protesting in front of the Imperial Hotel in Tokyo. The protestors were shouting in both Thai and Japanese to call for PM Prayut’s resignation.

They shouted “Prayut Get Out!”… “Dictatorship shall fall, democracy shall prosper”.

The protestors were also waving around placards saying… “No Coup” and “Democracy must come from the whole population”.

The group also asked the Thai government to release different young political activists arrested because they expressed their political opinions and mentioned the Thai royal family. The protestors said those teenagers did not do anything wrong, claiming the young activists were just “telling truths that the state could not admit”.

They also said that Thailand should look to a developed country like Japan as a role model and stop destroying Thailand’s children’s futures.

Thailand’s wildlife department has launched a campaign for people to donate money to feed rescued wild animals. This news comes as the department is having a tough time feeding thousands of wild animals on a tight budget.

While the Department of National Parks, Wildlife and Plant Conservation used to receive 80 million baht each year to care for animals, this year, the funding wildly plummeted to 30 million baht due to a government cut.

Now, the department is supposed to use that 30 million baht to feed about 26,000 rescued animals. A director-general of the department, Ratchada Suriyakul Na Ayutthaya, said that large animals such as tigers and bears eat about 5 kilograms of meat every day, in addition to vitamins. He added that the department also conducts health checkups on the animals every year.

You input that account number and the recipient will show up as Department of National Parks, Wildlife

Many of the wild animals the department is trying to care for were rescued from wildlife traffickers. Ratchada said the animals include wildcats such as lions and tigers, as well as bears, otters, and bird species among several other animals.

Hong Hoang, founder and executive director of CHANGE, an environmental NGO based in Vietnam, revealed that several investigations showed that tourist guides and information centres in Southeast Asia had beenfuelling the illegal wildlifetrade by facilitating consumption by tourists. Illegal wildlife traders will often pay guides and tourist offices a commission to send people their way.

Almost 200 cases of monkeypox reported across the globe, according to WHO