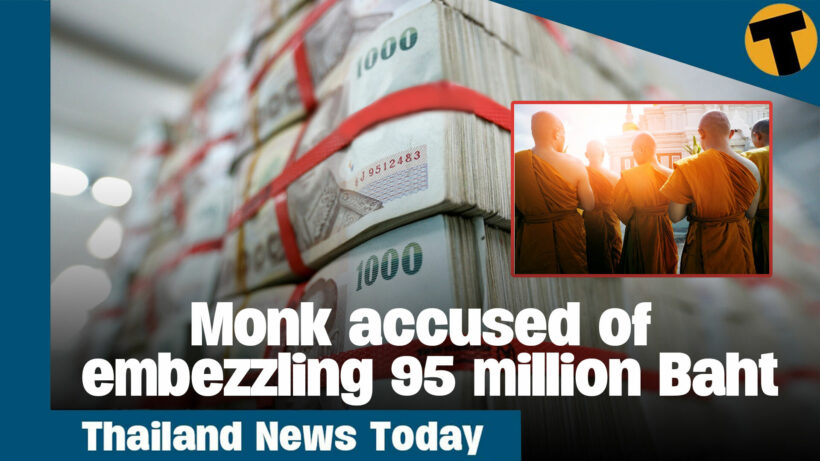 The head monk at Suthiwararam temple in Bangkok insisted he is innocent of any embezzlement charges after a renewed complaint was made against him.

The temple’s former accountant, Channarong Piandee, has made a fresh complaint against the abbot, Suthiratanabundit monk, maintaining he embezzled 95 million baht and disposed of a partially cremated corpse into the Chao Phraya River, which runs through Bangkok.

A committee, appointed by Bangkok’s office of the provincial chief monk to investigate the allegations, received a new statement from Channarong yesterday.

Channarong made it known that the original allegations were lodged with the National Office of Buddhism in 2019 but revealed some senior monks interfered with the investigation in the hope of exonerating the abbot.

The original investigation found that the abbot was the only person who withdrew the money from the temple’s account but strangely that was later changed to money being withdrawn by 3 people. The discovery that 3 people were involved in the embezzlement scandal led to the temple’s former accountant lodging another complaint, but this time with the PM’s office.

Channarong says he was the temple’s asset manager and lay accountant between 2013 and 2019. He revealed he learned about the half-cremated corpse being dumped into the river in 2018, and a year later found out about the embezzlement of temple funds.

Channarong said he was fired by the abbot after filing a complaint about the alleged embezzlement.

Suthiratanabundit monk continues to maintain his innocence and has been cleared of a previous investigation.

The abbot added the 95 million baht was withdrawn under proper permission by a temple committee for agricultural promotion and monastery construction projects.

Speaking of bank withdrawals, Siam Commercial Bank joined Bangkok Bank, and TMB Thanachart Bank in causing chaos throughout Thailand this morning when their banking apps crashed. They not only wreaked turmoil throughout the land but they also managed to unite all of its customers – in anger, after their mobile banking systems crashed on the day their salaries were supposed to be transferred into their accounts.

Customers of Siam Commercial Bank were greeted by the statement “Service is not available at this time, please try again later” when they opened their app this morning.

Customers of Bangkok Bank, checking whether their salaries had gone in, reported they were unable to check their accounts or make any transfers.

The breakdown of the apps was soon trending on Twitter under the hashtags: “SCB down,” “Bangkok Bank down,” and “TMB down”

It’s no surprise Twitter users were unkind to the banks.

One tweeted, “Thai mobile banking apps crash at the end of the month, and people are suffering.” Another voiced a similar opinion, “I just transferred money from TTB to SCB! Damn, I’m so mad at all of these mobile app makers. I have no money left to eat now.”

As of the recording of this video, my SCB and Bangkok Bank apps are back to normal.

The Royal Thai Air Force sent 2 F-16 fighter jets to inspect Thai airspace after a MiG 29 fighter jet from Myanmar was detected flying over the Pob-pra district in the northern province of Tak.

Yesterday, the Royal Thai Air Force reported that an unidentified aircraft was spotted in Thai territorial air space at 11.16 am. The plane was later confirmed to be a MiG 29 fighter jet operated by the Burmese military.

The jet was reported to fly about 4-5 kilometres into Thai airspace in the Prop Phra district of Tak, located across the ongoing battlefield in the Karen State of Myanmar. The aircraft flew around the Thai airspace for about 15 minutes and then proceeded to fire 4 missiles at the anti-governmental groups.

The media reported that Tak locals living in the community were “surprised and frightened”, saying the jets were flying very close to the ground. The schools in the area immediately announced an emergency and urged parents to take their children home. Some locals and students escaped into the schools’ bunkers as a precautionary measure.

Following the ongoing clashes between the Burmese military and anti-government groups in the area, Thai locals said this was the first time that aircraft from Myanmar had intentionally flown into Thai territory.

Some locals and officials noted that the Royal Thai Air Force was late in responding “to protect Thai territory”. Locals told Thai media that the Thai authorities were unable to do anything except “just watch the jets fly in and out of the country”.

But a spokesperson from the Royal Thai Air Force insists that they “quickly responded to the incident and sent up the F-16 jets within 5-10 minutes.

The spokesperson added that the Royal Thai Air Force had already assigned the Assistant Air Force Attache in the Royal Thai Embassy in Yangon to coordinate with relevant departments in Myanmar to prevent a similar scenario in the future.

Thailand’s PM Prayut Chan-o-cha has ordered a crackdown on illegal drugs in the country.

At an anti-drug award ceremony yesterday, Prayut urged local officials to continue cracking down on drug rings, as well as their financial supporters. However, the PM also stressed that rehabilitating addicts need occupational training to help them rebuild their lives.

Prayut also brought up the need to educate young people about the dangers of drugs. He said there need to be awareness campaigns to promote drug-free schools and communities.

This news comes after Thai police voiced support for anew approach to drugsin the country last week. Royal Thai Police Deputy Inspector Panurat Lakboon said that there is a nationwide shift to get drug users treatment instead of jail time. He said that programmes to solve drug issues are being introduced in over 1,400 communities across Thailand.

Time will tell if Prayut, along with Thai police and other officials, will be successful at controlling Thailand’s drug problems, while providing addicts with recovery.

Last week the Thai public health department declared that Thailand would move into a “post pandemic phase” from July 1. But a leading heart disease specialist, Dr Manoon Leechawengwong, at the Vichaiyut Hospital in Phayathai is calling on the Public Health department to postpone the declaration, saying that the current rise in cases proves that Thailand “is not ready”.

Last week the CCSA decided to use the term “post pandemic phase”, deferring to the World Health Organisation to make the “endemic” call in its own time.

The specialist cited the number of new Covid-infected patients being admitted to his hospital, saying that it was rising at a high enough rate for the hospital to hurriedly reopen its Covid ward.

The number of Covid infections has been trending up again after dipping below the 2,000-case mark a few times last week. Hospitals are reporting to the CCSA, Thailand’s Covid taskforce, of a rise in the number of hospitalisations, although the number of Covid-related deaths remains low.

Today’s Covid total includes 2,354 community cases and 4 imported cases, a drop from yesterday’s total of 2,695. There were also 16 new deaths – the daily death total remaining steady at this time. The total of PCR positive tests doesn’t include the 4,000 – 4,500 daily positive ATK tests that are registered with the CCSA – that number is also creeping up.

Dr Manoon Leechawengwong believes that, considering the current situation in hospitalisations, today’s declaration should be put on hold, claiming that “all hospitals in Bangkok are now seeing a spike in Covid-19 cases”. The CCSA reported yesterday that hospitals in provinces such as Samut Prakan (south east of central Bangkok) “are seeing a higher rate in excess of 20%”.

Meanwhile, the director-general of the Department of Disease Control, Dr Opas Karnkawinpong, says that the current rise in cases ” is only been observed in certain provinces, while the number of severe cases has slightly increased”.

From today, the Thailand Pass is no longer in use for foreign arrivals in Thailand, along with the dropping of the compulsory US$10,000 insurance.