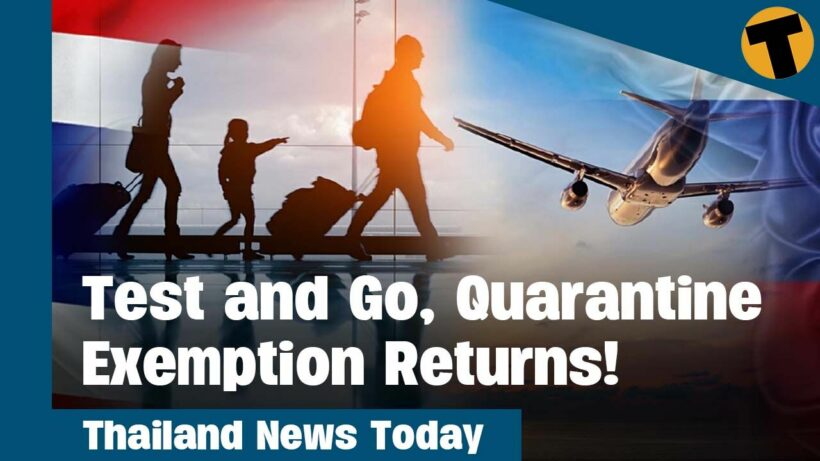 Test & Go is back on, and vaccinated travelers will be able to register for (almost) quarantine-free entry to Thailand starting February 1.

There have been slight revisions to the rules, now requiring travelers to have proof of their hotel booking on the first and fifth day of their stay in Thailand when they undergo RT-PCR tests.

At its general meeting chaired by PM Prayut Chan-o-cha, the CCSA agreed to reopen registration for the entry scheme. The measure needs to be published in the Royal Gazette to be made official.

Entry under Test & Go is open to travelers from all countries. Those who are fully vaccinated against Covid must apply for a Thailand Pass QR code to enter the country. Travelers are required to take an RT-PCR test on arrival and stay at an approved hotel for up to a night while they wait for their test results to come back.

Travelers will now need to book a stay at an approved hotel on their fifth day in Thailand for their second RT-PCR test. A spokesperson says travelers do not need to stay at the same hotel, adding that they can travel throughout Thailand in between their tests.

So here are the new requirements for Test & Go…

Proof of hotel booking for Day 1 and Day 5 in Thailand
Confirmed payment for a SHA+ approved hotel
Pre-payment for the two RT-PCR tests
Certificate of vaccination or vaccine passport
Proof of a negative result from an RT-PCR test issued no more than 72 hours before departure
Thailand Pass QR code (Click HERE for the official website run by the Department of Consular Affairs. The Thailand Pass is free. Watch out for other sites seeking payment.)

A spokesperson at the CCSA’s press briefing says infections have increased, but are going at a manageable rate and are now stabilizing with trends suggesting a decrease very soon and the rate of fatalities … relative to the Delta variant, is quite low.”

The CCSA also decided to add more destinations to the Sandbox entry programme, which allows vaccinated travelers to enter specified areas and roam freely for a week instead of undergoing a quarantine period at a hotel or facility. Trat’s Koh Chang was approved as well as Chon Buri’s Pattaya, เกาสีชัง, นาจอมเทียน and บางเสร่

Those who are unvaccinated must enter under the Alternative Quarantine programme, which requires travelers to isolate at an approved hotel or resort for 10 days and undergo Covid tests before they can be released.

Restrictions are easing in 25 provinces following a revision to the color-coded zoning based on local infection rates. Those provinces have moved “orange” controlled zones to “yellow” zones under surveillance.

The “blue” zones, which are approved for pilot tourism programmes, have remained the same and include Bangkok, Chon Buri, Kanchanaburi,
Krabi, Nonthaburi, Pathum Thani,
Phang Nga, and Phuket.
The zoning revision goes into effect January 24.

Alcohol sales at restaurants “yellow” and “blue” zones have been approved until 11pm.

Meanwhile, the State of Emergency, which was put in place in March 2020, was extended for another two months. The decree gives the government sweeping powers, through the establishment of the CCSA, to set restrictions and measures to combat the spread of the coronavirus in Thailand.

A former police chief charged with murder after a drugs suspect died when multiple plastic bags were placed over his head during questioning, says he just wanted to scare the victim.

ธิติสรรค์ อุทธนผล, aka. Joe Ferrari in Thai media, a police chief in the northern province of Nakhon Sawan at the time, told the court that he never intended to kill 24 year old จิรพงศ์ Thanapat.

Thitisan, along with 6 alleged accomplices, all former police officers, are all on trial. The defendants say they posed as customers in order to arrest Jeerapong and his wife on drug offenses in August last year. Thitisan admits to having placed plastic bags over the suspect’s head while he was under interrogation but insists this was merely an attempt to scare him.

Captured video footage shows Thitisan with his subordinates placing 6 plastic bags over the man’s head and while tying his hands behind his back, which led to his suffocation until he died. The police station CCTV footage was leaked by a junior officer.

The video of the botched interrogation and torture went viral, shocking viewers of the violent police treatment of a suspect.

Thitisan and 6 other officers were subsequently arrested and charged in the investigation. Thitisan is also being investigated for his role in the seizure, resale, and ownership of high-end cars. The former police chief earned the nickname Joe Ferrari as a result of his collection of luxury vehicles.

The next hearing will take place on March 16.

Thai authorities rescued 40 elderly people who were kept in poor conditions at unauthorized care facilities in Bangkok, some were abused and even put in shackles.

Thai authorities raided two centers in the Lat Krabang and หนองจอก districts, which are both owned by the same person, and discovered residents squeezed into tiny rooms, and some residents even in shackles.

When authorities contacted the residents’ families, they said they selected the centers because their prices were lower than those of other elderly homes. The woman who owns the centers had formerly ran an elderly home in Chachoengsao, which was shut down after one patient died from Covid.

Authorities found out about the centers when a person visiting the Lat Krabang home while applying for a job there notified them of the conditions he saw. He said the building was overcrowded. One doctor at the Department of Health Support said the Lat Krabang building appeared to be under construction, the facilities were not licensed to operate, and the hygiene level did not meet standards.

Authorities placed the residents whose families could not be reached in temporary state-run elderly care.

The Ministry of Commerce has now added chickens and chicken meat to their price control list and now mandates that chicken raisers with over 100,000 chickens, and slaughterhouses with the capacity for over 4,000 chickens a day, disclose their quantity, stocks, and sales costs each month.

The Central Committee on Prices of Goods and Services now requires all 55 domestic feed meal factories to list their sales costs, production volume, and stocks, as well as obtain approval from the International Trade Department, or ITD, before raising their products’ prices. Sounds like someone’s been reading a bearded person’s manifesto. The commerce minister thanked chicken farmers and producers who agreed to freeze their prices. He said the ITD has yet to approve higher prices for electric appliances.

The 51 items on the state price control list are primarily essential items that people use daily. 46 of the items are products, while five are services. Once chicken and chicken meat are approved, the number of items will be 52. The committee is extending price control on face masks, materials used to make face masks, products with hygienic alcohol, waste paper and recycled paper, for another year. The cabinet is also allocating 1.48 billion baht from the central budget to fund relief measures for consumers for three months.

Other foods on the state price control list include wheat flour, milk, vegetable oil, and pork.