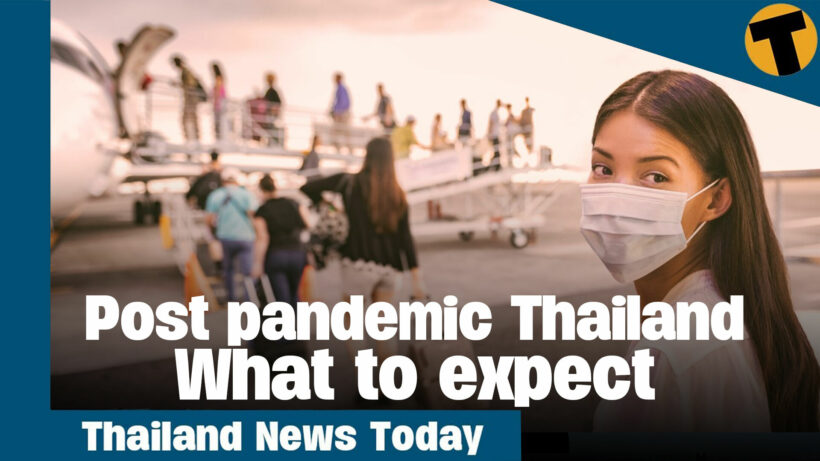 This Friday, July 1, there will be an official declaration that Thailand is now in “post pandemic” mode. Here’s an overview of the current situation and what to expect.

The word endemic is being avoided as Thai officials believe it will be up to the World Health Organisation to make that call.

According to the Public Health Ministry permanent secretary Dr. Kiattiphum Wongrajit, “What we expect to see is only small or medium clusters that will not do any harm to our public health service. The disease will be under control.”

He commented on the international concerns over two new Covid-19 sub-variants, BA.4 and BA.5, noting that infections had already been detected in Thailand but, at this stage, had not led to an increase in the number of serious cases being admitted to hospitals.

On the tourist side of the pandemic, deputy government spokeswoman Traisulee Traisaranakul announced that the International Air Transport Association is predicting that foreign visitors to Thailand could exceed 10 million this year, based on the the rising numbers of travellers to other countries this year and the slow improvement in airline schedules and flights.

The announcement of Thailand’s post-pandemic phase matches the revoking of the much-debated and hated Thailand Pass. Its scrapping is seen as one of the necessary pillars of tourism recovery in Thailand.

Along with revoking the Thailand Pass, the compulsory 10,000 dollar insurance is also gone. And from last Thursday, the wearing of face masks is a ‘voluntary’ situation for open and outdoor areas. But masks will still need to be worn in government buildings, public transport, airports, and on all internal flights at this time. As of yesterday, as far as The Thaiger can report, most Thais were still unwilling to ditch their face masks and nearly 100% of Thais walking around the Sukhumvit areas were still wearing their masks. But there was a growing number of at least foreigners starting to take advantage of last Thursday’s announcement.

However, Thailand’s emergency decree, which ceded decision-making powers relating to the Covid pandemic to the CCSA, will remain in force beyond July and up to at least the end of September. Thailand’s PM Prayut Chan-o-cha remains the chairman of this body.

So the countdown to Post Pandemic Day is this Friday.

Minister of Public Health, Anutin Charnvirakul, who has been jabbed 6 times with Covid vaccines, has tested positive for Covid-19 after arriving back from a UNAIDS meeting in Geneva, Switzerland. The minister was reported to have only mild symptoms at this time.

Anutin arrived in Thailand on June 26 with muscle pain and a sore throat and later found that he was positive for Covid-19 with an ATK test. According to the report, the minister would quarantine for at least a week, or until he was able to produce a negative Covid test.

The Permanent Secretary of the Ministry of Public Health, Kiatiphum Wongrajit, who travelled together, also tested positive and had similar symptoms.

The report from Channel 3 explained that the two men were likely to have been infected while working abroad because they had to meet and talk with many people. Both of the men were fully dosed with approved Covid vaccines before their travels.

Anutin once said in an interview to the media…

“I need thick armour because the Covid-19 can stab me anytime while working”.

He received a Pfizer vaccine as his 6th dose on June 13, just prior to his departure to Europe. Overall, he received 2 doses of SinoVac, 2 doses of AstraZeneca, and 2 doses of the Pfizer mRNA vaccine. After his 6th vaccination he continued working immediately without any side effects.

Some greatest hits quotes from him include:

“At the moment it is winter in Europe and farangs come to Thailand to hide from the disease. Many farangs dress dirty and don’t shower. As hosts we have to be very careful.”

Bangkok Remand Prison yesterday reported that 3 Thai political activists, jailed according to the lèse majesté laws, tried to commit suicide in prison due to stress.

Two male prisoners slashed their wrists with a piece of metal while a third prisoner tried to overdose on 60 paracetamol tablets.

The Chief of the Bangkok Remand Prison, Nattee Thongpard, explained that 11 suspects from the anti-government group Talugas were jailed on June 17, under section 112 of the Criminal Code or the lèse majesté laws. The prisoners were required to quarantine in a separate area for 10 days and, during their isolation period.

He says everything went well until officers reported that 21 year old prisoner, Porpon, overdosed with paracetamol. The incident happened at 9pm last Saturday.

Nattee revealed that Porpon gathered the tablets from other prisoners and decided to end it all due to the stress of being imprisoned. He added that the 2 other prisoners, whose identities were not disclosed, only suffered from minor cuts to their wrists.

The prison chief says the offenders had tried to hurt themselves before, but treatment had been administered to all of them, and everyone was safe.

Bangkok Governor Chadchart Sittipunt has asked residents in the city to inspect their properties and the surrounding areas for potential fire hazards.

Adeadly fire in Chinatown’s Sampeng Marketthis weekend saw 2 people die and 6 others suffer from the effects of smoke inhalation, while some residents struggled to exit the building because of grills on their windows, which are a common feature of old Bangkok homes.

Four shophouses, 3 vehicles, 4 motorbikes, and numerous items within the buildings were all destroyed by fire.

Last week, a fire started in the Khlong Toei neighbourhood, which resulted in fire damage to over 30 homes in the highly populated slum area. It left more than 100 residents without a home.

It is difficult for fire trucks to reach the taller buildings, and that is why the city governor is asking residents to examine their fire extinguishers to ensure they are in excellent operating order.

The city authorities say they are unable to check every property but they are prepared to offer guidance or assistance if needed.

According to the Bangkok Metropolitan Administration, some 131 fire accidents have been documented in Bangkok since the beginning of 2022, 39 of which were confirmed in January.

This month alone, the city has witnessed 3 different fire incidents. The first incident took place earlier this month at Silom, followed by the huge blaze in the Klong Toei community, and finally last weekend at China Town.