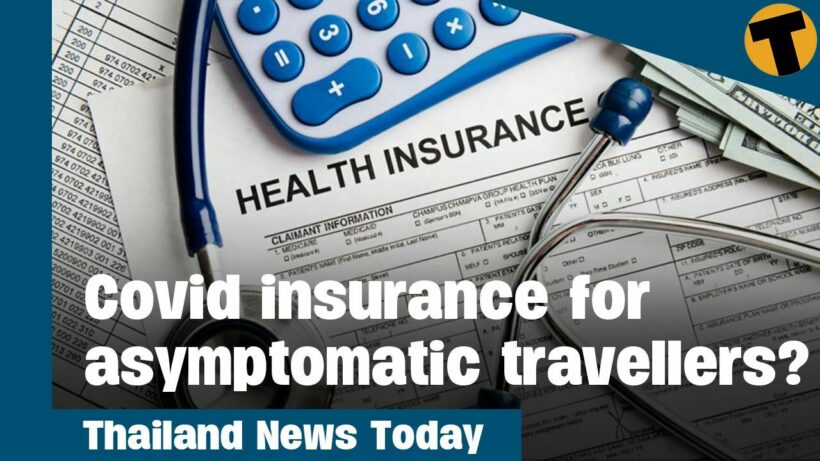 In today’s news, more talks on insurance coverage for asymptomatic travelers. Meanwhile, Thailand and Saudi Arabia trying to renew their relations after 3 decades of frostiness, and the latest talks on legalizing e-cigarettes in Thailand. All this is coming up in today’s program.

You’re watching Thailand News Today, bringing you the top headlines in Thailand and beyond. And in today’s news,

The Thai government wants to offer more Covid insurance options to foreign tourists whose own insurance does not cover hospital or hotel isolation in cases of asymptomatic infection.

The governor of the Tourism Authority of Thailand says officials are in talks with the Office of the Insurance Commission. Yuthasak Supasorn says premiums could start at around 800 baht per person to cover the cost of hotel isolation, which usually starts from around 30,000 baht.

The new ruling by the CCSA last week means that if tourists are not fully covered by their own insurance policies, they must cover the expenses themselves. According to Yuthasak, this means that if hotels allow guests to slip through the net, as appears to have happened in a number of recent cases, the runaway tourists will face legal action.

The president of the Thai Hotels Association disagrees with hotels being threatened with legal action. Marisa Sukosol Nunbhakdi says such repercussions will have serious implications for small hotel businesses with limited operating budgets. The THA president says that in the past, some infected guests have refused to go to the hospital, concerned about the cost and the likelihood that their insurance would not cover it, due to them being asymptomatic.

The Thai PM will be in Saudi Arabia tomorrow and Wednesday, invited by its leader, Crown Prince Mohammad bin Salman.

Prayut Chan-o-cha’s brief visit was confirmed by a statement from Government House yesterday. According to the statement, the visit aims to promote bilateral ties between both countries.

A statement from the Saudi ministry says the trip is for both governments to coordinate on shared interests, but didn’t go into specifics. Crown Prince Mohammad bin Salman, heir to the Saudi throne and a controversial leader to many, also serves as Saudi Arabia’s Defence Minister.

According to a report, the PM’s visit will constitute the first high-level talks between the Thai and Saudi administrations in over 3 decades. Thailand and Saudi Arabia got into a diplomatic spat following a jewelry theft in 1989. After a Thai janitor stole gems worth around US$20 million from the Saudi royal family, shipping them home to Thailand, relations between both countries turned distinctly frosty. Saudi Arabia downgraded diplomatic relations with Thailand in what was referred to as the, “Blue Diamond Affair”.

While the janitor, เกรียงไกร เตชะโม่ง, was sentenced to 7 years in prison for the theft, while the crime itself remains unsolved, with many of the jewels, including a rare blue diamond, never recovered. According to a Wikipedia entry, there were allegations in Bangkok that Thai government wives had been spotted wearing diamonds very similar to the missing jewels.

To make matters worse, 3 Saudi diplomats in Thailand were assassinated in 3 separate hits on the same night shortly after the theft. A witness to one of the shootings disappeared about a month later. In 2014, a senior police officer and 4 other men accused of murdering the witness had their case dismissed by a Bangkok court.

The diplomatic freeze with Saudi Arabia has cost billions of dollars in lost bilateral trade and tourism revenue, along with the loss of potential employment opportunities for tens of thousands of migrant workers.

A Thai police officer has been charged with multiple offenses after his speeding Ducati bike collided with a Bangkok doctor on a zebra crossing.

The charges, filed by Phaya Thai district police, include reckless driving and not stopping for pedestrians at a zebra crossing.

Dr. วราลัคน์ สุ-ภ-วัตร-จ-ริ-ยา-กุล died after being hit by นรวิชญ์ บัวดก s bike as she crossed Phaya Thai Road at around 3pm on Friday afternoon.

The incident took place in front of the ภูมิราชนครินทร์ Kidney Institute Hospital. Dr Waraluck was an eye specialist who worked at Bangkok’s Ramathibodi Hospital and was crossing the road on a zebra crossing at the time of her death.

The deputy commissioner of the Metropolitan Police Bureau says นรวิชญ์ has been charged with reckless driving, not stopping to allow pedestrians to cross the road on a zebra crossing, riding his bike too close to the left lane curb, and riding a bike on which road tax had not been paid.

Naravich, who is a riot control police officer, sustained minor injuries in the collision. It’s understood he has admitted all charges and visited the victim’s family to offer his condolences.

Meanwhile, after video of the incident did the rounds on social media, a statement from the ภูมิราชนครินทร์ Kidney Institute Hospital has called on people to stop sharing photos and footage out of respect for the dead woman and her family.

In an effort to draw in a tourist base focused on health and wellness, the Thailand Wellness Sandbox entry programme is launching in the coastal region of Prachuap Khiri Khan’s Hua Hin district and Phetchaburi’s Cha-am district.

The locations were selected for the first tier of the Wellness Sandbox project. Officials are looking into adding more destinations later on.

Government spokesperson ธนกร วังบุญคงชนะ told Thai media that The Tourism Authority of Thailand pitched the idea to the Centre for Economic Situation Administration following the “success” of the Phuket Sandbox, Promoting the areas for medical and wellness tourism is intended to help boost Thailand’s economy.

Under the Sandbox entry scheme, those who are vaccinated against Covid are eligible to enter Thailand and roam freely in approved Sandbox locations for their first seven days in the country rather than undergoing a strict quarantine at a hotel.

With registration for the Test & Go quarantine exemption scheme reopening on February 1, some see the new Sandbox options as redundant, so tourism officials aim to use the Wellness Sandbox to promote Hua Hin and Cha-am top health tourism destination in the world, touting the local specialities like Thai massage and spa services as well as traditional Thai medicine and herbal products.

This project will run together with the Thailand Riviera campaign which was started to support tourism in emerging provinces in southern Thailand including Prachuap Khiri Khan, Phetchaburi, Chumphon, and Ranong. According to the spokesperson, Hua Hin and Cha-am will be the pilot Wellness Sandbox destinations and other destinations will be added in the future.

A Thai government ministry is discussing the legalization of e-cigarettes in a bid to reduce the number of cigarette smokers in the country, with the Digital Economy and Society Ministry wanting to offer smokers an alternative to cigarettes.

The development has been welcomed by อาษา สาลิคุป from the End Cigarette Smoke Thailand network, who says that not only can e-cigarettes offer smokers a safe alternative, the Excise Department can also benefit from a tax on the products. Asa says he hopes the discussions are transparent and that the working group considers public opinion and is open to receiving advice from e-cigarette users.

Asa’s fellow member, มาริส การันยาวัด, says there are now many studies available that prove that e-cigarettes are a safer alternative to traditional cigarettes. He says this is reflected by the policies of some countries, pointing out that Britain, New Zealand, and the Philippines are likely to promote e-cigarette usage for those unable to quit smoking cold turkey, adding that more than 70 countries have legalised e-cigarettes as it can reduce the number of smokers.”

Meanwhile, Nation Thailand reports that Move Forward MP เท่าพิภพ ลิ้มจิตรกร has said he would back a proposal to make e-cigarettes legal and has discussed the matter with Commerce Minister.

He too cites lost tax revenue, the lack of a safer alternative for cigarette smokers, and a missed opportunity for the Tobacco Authority of Thailand to make money from the legalization of e-cigarettes and associated products.

And that’s all for this report. You’ll see me tomorrow not only on my typical Thailand News Today show, but I’ll also be pestering Tim and Jay on tomorrow’s Good Morning Thailand too so definitely tune in for whatever stimulating conversations happen between us. Meanwhile, you’re now up to date on the Thaiger.