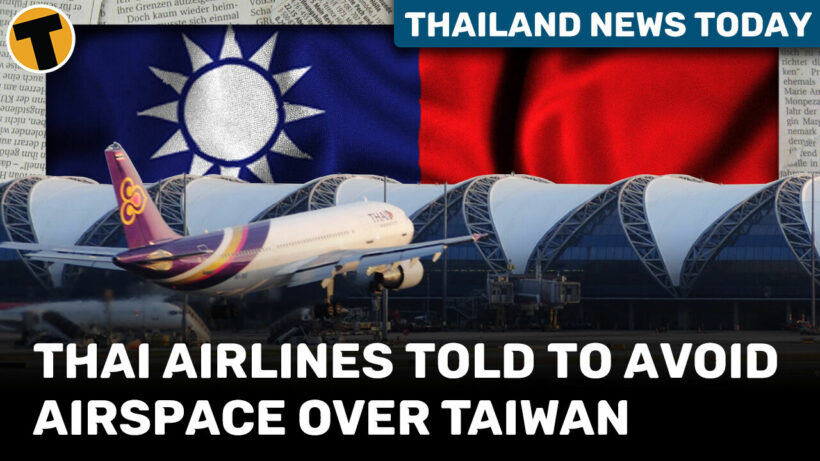 “China is convinced that Thailand, as a friendly neighbour of China, will continue to uphold international justice, support China’s efforts to safeguard state sovereignty and territorial integrity, champion China’s great cause of reunification, and work with China to jointly maintain the peace and stability in the Taiwan Strait and the region.”

Thailand responded, with Foreign Ministry spokesman ธานี แสงรัตน์ said saying quote “Thailand stands by the ‘One China’ policy. We do not wish to see any actions that would aggravate tensions and undermine peace and stability in the region.

“We hope that all parties concerned exercise utmost restraint, abide by international law and principles of respect for sovereignty and territorial integrity, and resolve their differences through peaceful means.”

It is unclear why the US House of Representatives Speaker met with Taiwan’s president Tsai Ing-Wen in Taipei, other than yet another poop-stirring exercise by the US to provoke China into doing something rash. It almost had the desired effect.

China’s response to Pelosi’s visit was to flex its military muscle and undertake a series of combat exercises near the Taiwan Strait.

While the US threatens China with military action if they invade Taiwan, the awkward truth is that it does officially recognize the One China policy.

China has warned airlines operating in Asia to avoid airspace over Taiwan over the next four days as the mainland’s military conducts a series of exercises until Sunday, August 7.

Yesterday, the Civil Aviation Authority of Thailand informed the media that it had notified each Thai airline about the warning.

Another route that’s still closed is the one to Chiang Rai, as the Nok Air plane which skidded off Chiang Rai Airport’s runway was finally lifted out of the mud, but the airport will remain closed until August 6 due to poor safety standards.

The incident sparked a safety inspection by the Civil Aviation Authority of Thailand, who found that the airport does not meet the safety standards of the CAAT in several areas.

Once Mae Fah Luang Chiang Rai Airport can prove to the CAAT that the necessary repairs have been made and meet safety standards, the airport will be allowed to resume normal operations. The airport plans to reopen on August 6, once it completes the following demands…

Nok Air is still under fire from disgruntled passengers who spent over an hour in the cabin with no lights or air conditioning after the accident occurred. Theshoddy evacuationhas been heavily criticised as dangerous, with netizens expressing that an aircraft should be evacuated in no longer than 90 seconds in such a situation – in case the aircraft sets on fire or blows up.

Thailand is pitching in to help Sri Lanka in its tumultuous economic crisis. Thailand’s Foreign Ministry announced yesterday that the country has donated medicines, medical supplies, food, and financial support.

Several departments made donations adding up to about 5 million baht, while the Foreign Ministry donated another 1.3 million baht worth of medical supplies to Sri Lanka.

UNICEF has also issued an appeal for funding, saying that children in Sri Lanka were disproportionately affected by the severe economic crisis.

Sri Lanka plunged into chaos in April, after the country experienced a 13-hour power blackout, its longest blackout ever recorded. Since then, the country has been unable to pay for fuel, medicine, and other necessary items.

Property platform Kaidee Property revealed that during the first six months of this year, Lat Phrao district in Bangkok was the most searched residential area in the capital, followed by Chatuchak, Bang Khae, Suan Luang, and Lat Krabang.

Turns out these five areas are more popular with Thai residents than with foreigners. The areas are well equipped with utilities, convenient transportation, and a number of shopping malls. The findings are consistent with last year’s land appraisal figures, which showed Lat Phrao increased by 38%, Chatuchak by 36%, Bang Khae by 14%, and Suan Luang, and Lat Krabang, both increased by 11%.

The condo price segment that got the most attention was the 1.35 million baht units while the rental price was no more than 10,000 baht.

The top five areas with an increase in real estate supply, as measured by the number of properties renting and selling on the platform, saw Khlong Toei district, the most popular, followed by Watthana, and Phra Khanong. These areas are popular among foreigners.

The survey revealed that although the real estate supply in the area has increased, foreign demand has not yet returned. This could possibly change in the second half of the year now the government has relaxed entry measures into Thailand.

A man from Nakhon Ratchasima province in northeast Thailand, sarcastically grabbed his fishing rod and launched it into a pond-sized pothole this morning in an attempt to bring attention to the sorry state of road affairs in โนนมันเทศ.

The village has been waiting over 10 years for the road to be repaired and he has had enough.

The road sees a lot of traffic, but there’s more potholes than actual roads, presenting a danger to the numerous vehicles passing through every day, especially in monsoon season.

The “fisherman” said the giant pothole is located right outside a school and is an obstacle that students face every day on their way to and from school.

He approached the authorities several times over the years to ask when the road would be fixed. When villagers asked for the road to be repaired, they were told to “calm down, be patient and wait.” After 10 years of waiting, the villagers don’t feel like help is coming any time soon.

The 2 kilometre road is the responsibility of the Nakhon Ratchasima Provincial Administrative Organisation, who will hopefully expedite the road repairs once they catch wind of the villager’s one-man protest.

In 2020, residents of Chon Buri released catfish into potholes in Huai Kapi subdistrict to mock the negligence of government agencies who had refused to repair potholes in the roads for several years.