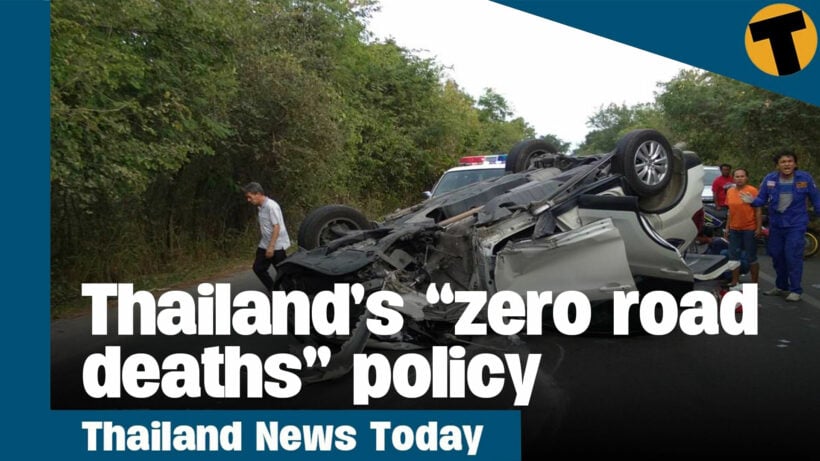 Thailand’s PM Prayut Chan-o-cha announced that the government aims to cut the number of road deaths by almost 2 thirds by 2027.

Thailand has the ninth highest road death rate in the world, with 32.7 deaths per 100,000 people, according to the WHO. Thailand’s target for 2027 is to cut this number to 12 people per 100,000. It also announced a so-called “Vision Zero” goal, not to be confused with China’s zero covid goal, that aims to completely eliminate traffic fatalities, and severe injuries by 2050.

Vision Zero strategy first started in Sweden, but who knows if a developing country like Thailand will be able to achieve anything close to this goal. PM Prayut says the 2050 goal will be hard to achieve, but claims it’s possible if everyone cooperates.

In January, one road death made headlines across Thailand when a motorcycle hit andkilled a doctorat a zebra crossing in Bangkok. After the incident, a health organisation and a road safety organisation teamed up to study how many cars, motorbikes, and public vehicles stop for pedestrians at 12 zebra crossings in Bangkok. They found that altogether,89% do not stop. For motorcycles, the rate was 92%. For cars, the rate was 86%. For public vehicles it was 80%.

One point of optimism is,Songkran road deathsreportedly went down by 20% this year from last year during the seven deadly days between April 11-17.

The Thai government is patting itself on the back yet again, as it says the WHO will use Thailand as a role model for Covid management

Spokeswoman Traisuree Taisaranakul revealed this after a meeting between health minister, Anutin Charnvirakul, the WHO’s director-general and its regional director for Southeast Asia.

According to a Nation Thailand report, the meeting took place at the 75th World Health Assembly in Geneva, Switzerland. Traisuree says the WHO will use Thailand’s Covid-19 management as a role model to create an international standard for disease management worldwide.

According to Traisuree, the WHO also praised Thailand’s vaccine rollout, with over 81% of people having now received their first dose and over 75% having received their second. The organisation has also thanked Thailand for participating in various projects, including the “WHO Biohub”, a system for the research and development of vaccines to target emerging diseases.

It’s understood Anutin has invited the WHO director-general to a high-level meeting on health and the economy in Bangkok.

According to the Nation Thailand report, Anutin has thanked the WHO for nominating Thailand as a pilot country for its Universal Health and Preparedness Review, between April 21 and 29 and says the country is ready to share its UHPR experience with other countries.

Thailand’s Disaster Prevention and Mitigation Department has admitted that 2 tsunami detection buoys are out of order, but insists they will be repaired soon.

According to the reports, both buoys had stopped submitting information to the National Data Buoy Centre website, which is run by the National Oceanic and Atmospheric Administration in the US.

According to a Nation Thailand report, a statement issued by the DPMD says 1 tsunami buoy had been deployed in the Indian Ocean, around 965 kilometres west of Phuket. The other was positioned in the Andaman Sea, around 340 kilometres off the coast.

According to its statement, the DPMD has been regularly monitoring the buoys and using overseas data to analyse the tsunami risk for Thailand. Officials say they remain confident in their ability to issue timely warnings of any impending tsunami threat.

Thailand’s wet season is still alive and well. From tomorrow, May 27, until May 31 (Tuesday), expect heavy to very heavy rains in the country’s northeast, central, east, and southern regions. Meanwhile, the current Monsoon in Thailand’s southwest is expected to get stronger.

A warning from the Thai Meteorological Department that won’t be unfamiliar in the slightest to anyone who lives in the country. That is to be ready for accumulated rainfall that could cause flash floods.

The department warns ships in the upper Gulf and the Andaman Sea to be careful, and avoid areas experiencing thunderstorms. Earlier this week, ayacht capsizedin stormy waters in Thailand’s southern province of Krabi. A fishing boat rescued the yacht’s 3 passengers, who had gotten onto a small dinghy.

Last week, Bangkok flooded in many areas after10 hours of torrential rain. The most affected areas are Chatuchak, Lak Si, Don Mueang and Lat Phrao. In some places, the water level reached higher than 1 metre. The floods caused traffic jams, namely at Ratchayothin Intersection and Ratchadapisek – Lat Phrao Intersection.

To cope with meetings failing because of absence and lack of quorums, the Secretariat of The House of Representatives has developed a mobile app to notify the MPs of upcoming meetings. The ‘innovation’ presumes that MPs have failed to turn up because they simply forgot… that’s usually not the case.

There are 474 MPs in Thailand’s parliament, and at least 237 members are required for a quorum. Thai media reported that the parliament meetings had failed recently due to a lack of quorum 17 times within the last 3 years.

Some members presented themselves at the start of meetings then walked out later, while others showed that they were present by leaving their MP cards with colleagues. The last time this happened was on February 10. There were only 227 MPs in the meeting. The President of the Thai National Assembly, Chuan Leekpai, had to announce the cancellation of the meeting after MPs spent more than 30 minutes blaming absent members.

MPs often cited problems with either having Covid, or family members coping with Covid as excuses.

Deputy PM, and Commerce Minister, Jurin Laksanawisit, yesterday moved to ease fears of food shortages in Thailand on the back of recent protectionism measures introduced by neighbouring countries, export bans, and the ongoing Russia-Ukraine conflict.

Jurin declared Thailand has an “abundance of food” produce and there will be no shortages despite the recent embargos.

Speaking at the opening ceremony of the THAIFEX exhibition, the minister was bullish about the kingdom’s import-export future and said the nation can take advantage of the recent uncertainty and promote Thailand as a global hub of quality agricultural food and products.

The Malaysian government this week revealed it is banning the export of all poultry from the country. Indonesia recently banned palm oil exports, India restricted wheat and sugar exports to prevent a surge in domestic prices, while Serbia and Kazakhstan both imposed quotas on grain shipments.

Jurin says the Commerce Ministry has kept a close watch on domestic food stocks to ensure sufficient amounts and plans to promote exports of items that exceed Thai demand.

Thailand is the 13th biggest exporter of food to the world with a market share of 2.3%, the fourth biggest in Asia.

Chief executive of Charoen Pokphand Foods, ประสิทธิ์ บุญดวงประเสริฐ, also backed Commerce Ministry claims, despite admitting there were some worries of shortages of fertiliser and maize, the ongoing war in Ukraine, and new diseases in humans and animals.

He revealed that with growing concerns about a food crisis, many food importing countries have returned to buy food products from Thailand. Thailand should beef up its strategy to build up the Thai image of food safety, and as a leading food producer in Asia.”