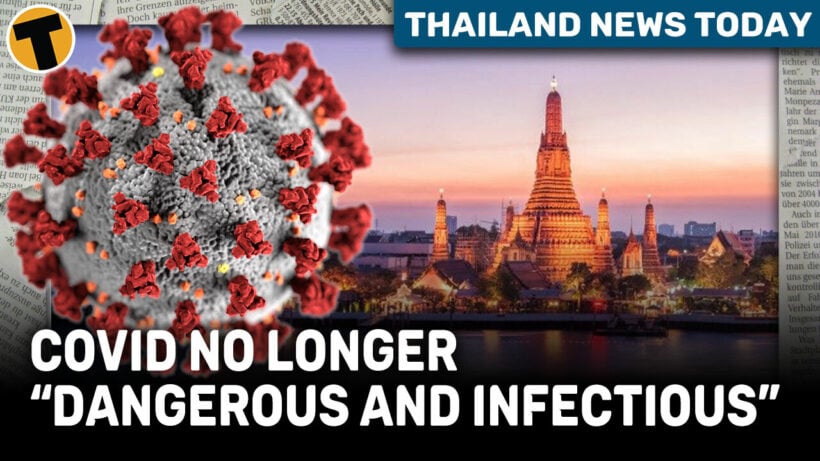 Thailand’sCommunicable Disease Committee no longer considers Covid a “dangerous infections disease”, the owner of the nightclub that burned down has been released on bail, and will Prayut resign at the end of this month?All this and much more, coming up in today’s programYou’re watching Thailand News Today, bringing you the latest top stories in Thailand beyond. My name is Jett Gunther and in our first story,Thailand’s National Communicable Disease Committee decided to change the status of COVID-19 today (Monday), from a “dangerous infectious disease”, which came into effect on March 1st, 2020, to an “infectious disease under watch”, tentatively from October 1st, as Thailand cautiously transitions to a post-pandemic status.

Chaired by Public Health Minister Anutin Charnvirakul, the committee also approved a policy guideline framework, encompassing several aspects of COVID-19 monitoring and containment efforts, such as controlling the spread of the disease by taking into account the number of patients hospitalised, bed occupancy by severe cases, access to vaccines and anti-viral drugs, adjustment of quarantine measures, publicity campaigns to educate people of the merits of vaccination and a legal review to correspond with the changing situation.

For post-pandemic management to remain in line with the changing situation, Anutin said that the committee will allow state hospitals to procure anti-viral drugs independently, instead of waiting for deliveries from the Government Pharmaceutical Organization, and to claim refunds later, like other infectious diseases, in order that the public will have improved access to medication.

The committee has acknowledged that more people are getting infected but, at the same time, are well informed about COVID-19 and the importance of self-protection against infection.

The committee has also approved hospital use of Long-Acting Antibody (LAAB) with patients.

Health authorities are now keeping a close eye on the development of five confirmed infections of the Covid-19 sub-variant BA.2.75, known to be antibody resistant. The director-general of the Department of Medical Sciences outlined all the cases and warned that the sub-variantcould spread quicklyif not properly monitored.

The BA.2.75 sub-variant has about 90 mutations from the early strain at the beginning of Covid originating from Wuhan, making it able to avoid antibodies. This variant is still very rare in Thailand and will hopefully not become predominant.

Currently, 91% of a sample of 382 infections in Bangkok, and 80% of those in other provinces were of the BA.4/BA.5 sub-variant of the Omicron variant, a total of 322 cases. There were also 58 people infected with BA.2 and one person with BA.1. The remaining patient was found to have the BA.2.75 sub-variant.

Today, Pattaya Provincial Court released the 27 year old owner of Mountain B pub – on bail for 300,000 baht. He was arrested on Saturday following thetragic firethat struck Mountain B pub in Sattahip district of Chon Buri province, killing 15 people in total and injuring 40 more.

The owner was released on the condition that he must wear an electronic monitoring bracelet, must not tamper with the evidence “or cause any other mischief.”

The court originally authorised his detention for 12 days from August 8 – 19 due to the seriousness of the accusations made against him. The accused’s relatives subsequently filed a petition for his temporary release for 100,000 baht.

He must present to court three more times after successfully complying with three rounds of bail.

The owner is facing charges such as negligence causing death and opening an entertainment venue without a license, under Section 291 and Section 59 of the Criminal Code and Section 26 of the Entertainment Place Act of 1966 respectively.

Mountain B pub did not have a license, was open past the hours specified by law and did not have fire insurance. Sia B was arrested last month for opening the venue illegally, but somehow the venue opened again.

Cheap, flammable sound absorption panels which caused the fire to rip through the venue in seconds and produced billowing smoke are thought to be thereasonthe fire claimed so many lives and injured many more. The fire would not spread so quickly if the owner had spent 200 baht more on each panel for non-flammable panels, according to experts.

There were 50 people inside the venue cramming out of one small door at the front and many people could not make it out in time.

The leader of the National United Front of Democracy Against Dictatorship, more commonly known as the Red Shirts, yesterday invited people to protest against Prime Minister Prayut Chan-o-cha on August 23, the day before he officially stands down as Thailand’s PM.

Yesterday, the Red Shirts’ leader, จตุพร พรหมพันธุ์, gave a speech at the October 14th 1973 Memorial Monument in Bangkok and invited protestors to gather on Ratchadamnoen Road at 4pm on August 23 to expel the PM.

He urged every protestor to prepare, adding they would have a countdown to the resignation of PM Prayut until midnight on August 24.

Jatuporn added that people had their own choices. If they wanted PM Prayut to remain in the position until 2027, they just needed “to sit and relax at home.” But if people thought that it was time he should go, they should “get up and fight back.”

Prayut was announced as PM by the National Council for Peace and Order on August 24 in 2014 under the interim constitution of Thailand after a military coup on May 22 of that year. Then, he was announced as PM again on June 9 in 2019 in the first election after the coup.

Supporters state that Prayut’s period as PM began when he was officially announced as the PM in 2019, which means he remains in office until 2027. His supporters insist his rise to power in 2014 was as leader of an interim government and it shouldn’t count.

Many political activists have submitted documents to the Election Commission of Thailand (ECT) asking the independent government agency to further investigate the total duration of the PM’s time.

Next Tuesday, August 16, and Wednesday, August 17, opposition parties, led by the leader of the Pheu Thai Party, Chonlanan Sikaew, will discuss the PM constitutional topic with the ECT.

Police traced the digital footprint of a man previously arrested for violating the Computer Crimes Act. The man had purchased a computer system with false information.

The names and nationalities of the actor and actress were not made public but the actress revealed she got paid 20,000 baht a day while the man received 6,000 baht a day.

All four suspects were charged with jointly producing pornographic material, which they have reportedly accepted, and were awaiting further legal proceedings at Na Jomtien Police Station.