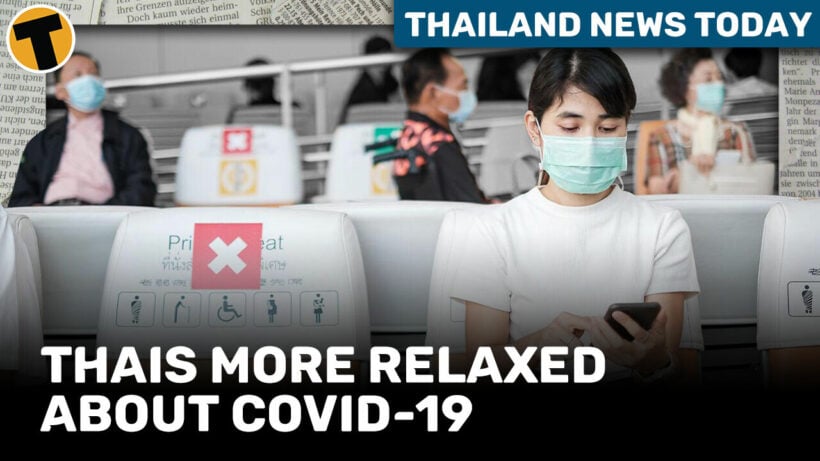 A survey conducted by the Department of Health Service Support revealed that Thai people are a bit more relaxed about Covid, though still not as relaxed as many parts of the world.

These results came from comparing the data from the first round of surveys conducted between March 5 to 31 with 113,847 respondents, and the latest round between July 1 to 20 with 28,487 respondents.

The survey revealed that Thai people were about 4% more likely to engage in higher-risk activities than previously while there is an 11% decline in mask-wearing.

The department believes the survey indicates Thai people are engaging in more physical contact due to relaxed social distancing and masking measures.

Despite the latest findings, the Ministry of Public Health still encourages the general public to observe Covid safety protocol.

In what is perhaps a Thai rendition of let them eat cake, Prime Minister Prayut Chan-o-cha told Thais that were suffering the most from record high electricity prices to go study Buddhism.

As the country approvesrecord highelectricity prices to offset rising prices of imported gas, Prayut suggested after a Cabinet meeting to quote “Go and study Dharma. Study the Four Noble Truths and ask yourself, what is suffering? How can it be solved? Then look at the methods to end suffering”

In response, the abbot of Wat Suan Kaew temple พระพยอม กัลยาโณ corrected the PM Prayut’s remarks and said that rising electricity prices have nothing to do with the Four Noble Truths…

The abbot said that electricity is a necessity, and those who cannot afford the rising bills will disproportionately suffer because they simply won’t be able to pay their bills. Then, their electricity will be cut off. Without electricity, it is difficult to do anything.

The monk added that bills are going up but people’s income has not increased, and that causes suffering.

Phra Phayom said that the temple pays 120,000 baht per month for electricity and expects the bill to go up to 150,000 baht next month due to price increase.

The monk said the only thing left to do to stop bills from soaring too high is to try and save electricity where possible. For people who can afford it, the monk suggests using solar cells to reduce expenses.

The abbot’s remarks are seen as controversial, because when a man becomes a Buddhist monk they choose to “renounce worldly affairs,” this includes not meddling in politics, which is why monks are not allowed to vote in elections in Thailand.

This week could quite possibly be PM Payut’s last week in office, as he should step down on August 24 after completing two four-year terms as Prime Minister, according to Thailand’s constitution. Whether he WILL step down, is a different question.

An inspection team from the Fire Protection Committee of the Engineering Institute of Thailand revealed that the Mountain B pub in Chonburi that burnt down did not match the proposed building plan and that the club had been built in a different area than originally proposed.

The inspection revealed that the club’s single exit point was a major factor causing people to not escape the fire in time. The exit door was not wide enough, and for some reason, was locked on the night of the fire, delaying the evacuation significantly.

The materials chosen to construct the building were another reason the fire became so deadly so quickly. The exact cause of the fire is still unknown, but thecheap sound absorption panelsthat lined the walls of the venue caused the fire to spread in seconds. The tragedy could have most likely been avoided had the venue’s owner chosen to spend 200 baht more a panel for non-flammable panels, according to soundproofing experts.

Evidence is still being collected and is expected to be presented to police in another one to two weeks.

Thailand’s Public Health Minister Anutin Charnvirakul is standing behind the decriminalisation of the green plant, saying that it has since had a positive effect on Thailand.

At a press event about the topic, Health Minister Anutin Charnvirakul said he was open to further amendments to the green plant law to make it more recreational in the future. We can’t explicitly say the name of the plant because Youtube will automatically flag the video, so apologies for the euphemisms.

Anutin even added that the decriminalisation of the plant has not been damaging to society since it was taken off the country’s Category 5 narcotics list on June 6 and the country had recorded only 60 severe hospital cases, because of improper use.

“I would say some negative cases appeared on the news that are very dramatic, such as use in schools or smells in public places. Under laws in place, authorities have full right to take legal action against such cases.

Anutin believes the negative stories on the decriminalisation of the plant have been exaggerated for political reasons and added that legalisation for medical treatment has been a highly successful campaign.

But Thailand isn’t stopping there, on Monday, theThai Narcotics Control Boardannounced it is looking at the medical benefits of magic mushrooms, which are believed to be effective in combating cluster headaches, anxiety, anorexia, obsessive-compulsive disorder, and various forms of substance abuse.

If you’re heading to Hua Hin, beware of Rama 2 Road. Another accident was reported on the route where an iron bar fell from a truck onto the road and almost hit a car. Rama 2 Road has a history of continuous accidents caused by never-ending construction projects.

On July 30,the U-turn bridge over the Rama 2 Road collapsed onto four vehicles. A couple of weeks before the collapse, one netizen posted a dashcam video showing a heavy steel beam falling onto a pickup making the car bounce into the air.

Then last week, a man posted pictures of his damaged car window on Facebook after a tarpaulin full of rainwater fell onto his car from a construction site above him.

And yesterday, a fourth accident was reported on the road. A sedan car was hit by a 3-metre iron bar that fell from a six-wheel truck working on the construction site.

Luckily, the steel bar didn’t fall directly onto the car. The driver was safe, but her car’s bumper was damaged by the bar.

The Highways Department urged the driver to claim compensation from the insurance company of the truck as the incident happened due to the recklessness of the truck driver and construction staff.

According to a report on the BBC, there are three main construction projects on the Rama 2 Road that started in 2018 and various minor ongoing road repair projects.

The construction projects have caused huge traffic problems on the road, and accidents.

Many Thai netizens made public that they have witnessed and experienced similar accidents on the road. They believe there will be more because the construction projects are never-ending.