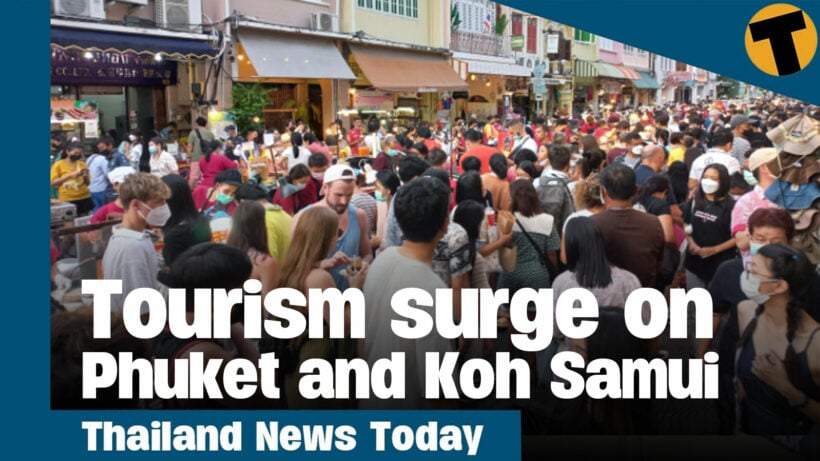 The country is still under an emergency decree which will last at least until the end of this month, and could be extended again for another 2 months, as it has since April 2020. The emergency decree bypasses all Covid-related matters and budget from the Thai parliament, with the CCSA, chaired by the prime minister, meeting every 2 weeks and updating all restrictions and legislations.

The CCSA is set to meet this Friday to decide further easing of restrictions around the country, and any changes to the Thailand Pass.

Thailand still has an official ban on bars reopening, although many former bars and nightlife destinations have ‘converted’ into faux-restaurants allowing them to serve alcohol until midnight, which is the current legal closing time in Thailand.

There also remains an enforcement on the wearing of face masks in public areas, but that may start to be eased in some locations, in some situations, over the next month under the nickname of ‘endemic sandbox‘.

People travelling to Thailand both foreign and Thai are still required to apply for entry via the Thailand Pass.

Travellers have to upload their vaccination paperwork, passport details and proof of covid insurance coverage of at least 10,000 us dollars. Thais and foreigners with a current Work Permit, are exempt from the insurance coverage (as they are covered by Thailand’s universal health care system). Vaccinated or undervaccinated arrivals will need to also upload proof of anegative PCR Test taken within 72 hours before departure to Thailand.

If the unvaccinated traveller is unable to provide a Negative PCR test, they will have to quarantine for 5 days.

Despite the plummeting numbers of Covid infections, Thailand was #9 in the world for new cases, according toworldometers.info.

The Thai Government says relaxed travel restrictions have led to a tourism surge on Phuket and Koh Samui.

Patting itself on the back for letting people do what they’ve been wanting to do this entire time, the Thai government says its decision to ease entry restrictions has boosted tourism during the country’s high season between March and May.

According to a Nation Thailand report, Thanakorn says that over the weekend of May 13 – 16, Phuket welcomed over 150,000 tourists, a figure that’s expected to generate tourism revenue of around 1.8 billion baht. The province’s occupancy rate during such long holidays was 44.46%.

He says that occupancy rate is likely to increase to between 60 and 80%, especially in popular spots like Patong Beach and Phuket Old Town. Meanwhile, over on Koh Samui and Koh Phang Ngan, many tourists arrived for the famous Full Moon Party, helping to revive the local economy.

Thai schools will no longer have to close if a student, teacher, or staff member tests positive for Covid-19, according to the Department of Health.

The department’s deputy director-general, Sarawut Boonsook, has confirmed the new policy as the new school term gets underway today.

According to a Thai PBS World report, if a student, teacher, or school staff member is found to have contracted the virus, health officials and school management will work together on isolation measures that allow the school to remain open.

Sarawut says if an infected student is asymptomatic or only has mild symptoms, he or she can remain in class but must be kept at least 2 metres from other students and will be unable to participate in group activities. He adds that the classroom must be kept well-ventilated and disinfected often.

In the event of a low-risk patient at day schools, on-site learning can continue, provided disease prevention measures are adhered to. Low-risk students can attend class, provided they are seated a metre from others. In the case of a high-risk patient who is not vaccinated, the student will be advised to quarantine at home for 5 days, plus another 5 days under observation, whether he or she has symptoms or not. High-risk patients who are fully vaccinated and asymptomatic can still attend class.

Meanwhile, in boarding schools, high-risk cases can participate in lessons from a quarantine zone for 5 days, plus an additional 5 days’ observation. Infected students who are fully vaccinated and asymptomatic will not need to quarantine.

In related news, Kiattibhoom Vongrachit from the Public Health Ministry, says students, teachers, and school staff members who travelled during the long weekend should take an antigen test prior to returning to school today. However, he added that such testing is not mandatory, but merely a recommendation.

A Thai woman is seriously injured after falling from the 26th floor of a condominium in Bangkok at around 2am on Sunday.

Rescue teams arrived at the scene within 5 minutes, but the woman had to wait until 4am to receive treatment at the hospital, according to the rescue team. The woman suffered multiple broken bones.

Erawan Emergency Centre took the woman to a hospital 1 kilometre away from the scene, who allegedly denied her emergency treatment. The hospital said the woman’s injuries were too severe for them to treat because they didn’t have “enough equipment,”. The rescue team then took her to Police General Hospital instead where she received treatment at 4am. Thai netizens are outraged that it took 2 hours for the woman to receive hospital treatment.

According to Thai media, the woman fought with her foreign boyfriend and jumped off the balcony of a condominium in the Rakhamhaeng area of Bangkok.

The woman broke both of her legs in the fall and suffered other minor injuries. Miraculously, she did not suffer any head injuries.

From miraculous, we now have tragically unfortunate. A farmer was killed by a lightning strike in a cow field in Buriram province, in northeast Thailand, yesterday evening.

The 53 year old woman was herding her cows into their cowshed to escape the storm when she was struck.

Wanida was out working in the fields with her 53 year old relative Thongbai when it started raining heavily yesterday evening. Thongbai said the pair were in the kratom field when the sky began to darken, so Wanida suggested walking to the cow field to herd the cows into their shed to escape the rain.

Once the pair arrived in the cow field, Thongbai said the storm worsened and she could barely see in front of her. She heard loud thunder and saw a flash of lightning. Next thing she knew, 9 cows were huddled around the body of their owner, Wanida, who had been struck dead by lightning.

Wanida’s 50 year old husband Sakarn said said he thinks Wanida’s silver earrings acted as a medium for the lightning to travel through. Around 10% of people struck by lightning are killed.

Wanida’s body has been returned to her family for religious ceremonies to be undertaken.

An 8 year old girl was seriously injured after she was attacked by her family dog at around 4pm yesterday in Samut Prakan province, central Thailand.

The child said she was skateboarding in the kitchen when the Pit Bull and Thai mixed breed dog suddenly got up and repeatedly bit her head and hands.

The dog in question was the family’s pet Cola, a 10 year old Pit Bull and Thai mixed breed dog. The child’s father said he took on the dog when its previous owner passed away. He said he had raised the dog for many years and it had never been aggressive or bitten anyone in the house before. He said he doesn’t know why Cola attacked his daughter this time.

Apichada said she was skateboarding next to the washing machine near where Cola was lying down when the dog suddenly got up and bit her. She called her relatives for help who were asleep at the time.

Apichada’s 39 year old father rushed into the kitchen and got Cola off his daughter and tied him up. Then, he called an ambulance for help.She had two dog bites on her head, around 2cm and 4cm long respectively. Thai media reported that her left hand had been “chewed” by the dog.

The child received first aid at the scene and was taken to Phra Samut Chedi Hospital for treatment.