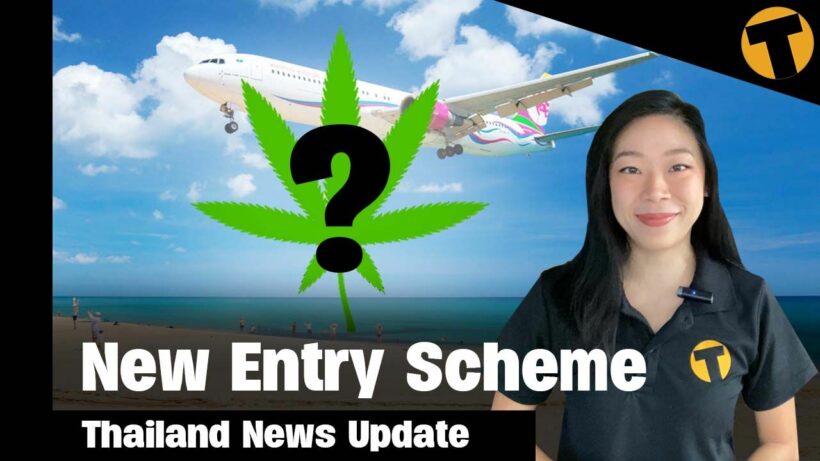 Now that Thailand’s alcohol curfew has been extended in many provinces, the government says they’re serious about cracking down on venues serving past the 11pm cut off time. Or on bars and nightlife venues who are parading as restaurants without implementing the full precautions.As of yesterday, venues that meet the SHA certification, or the Public Health Ministry’s Thai Stop COVID 2 plus standard can serve alcohol until 11pm instead of 9pm in provinces classified as “blue” or “yellow” zones.“Blue” zones, which are approved for tourism pilot programs, include Bangkok, Nonthaburi, Pathum Thani, Phuket, Kanchanaburi, Chon Buri, Krabi and Phang-nga. 25 other provinces are classified as “yellow” zones under high surveillance to prevent the spread of Covid-19.The CCSA review restrictions every two weeks.

Someone in the government has been busy conjuring up new ways of attracting tourists into Thailand. Now, a “Cannabis Sandbox” entry scheme is being discussed to draw in marijuana enthusiasts from overseas. Yes… they’ve actually titled the proposal the Cannabis Sandbox. But don’t get too excited. When the government talks about cannabis, they mean parts of the plant with low… like very low… traces of the psychoactive component THC.The Thai Food and Drug Administration mentioned the idea of a “Cannabis Sandbox” , allowing travellers to roam freely in approved districts or provinces without undergoing a strict quarantine. In this case, cannabis products would be involved, just no joints or “happy brownies.” Maybe weaving hemp baskets, or being introduced to the wonders of Cannaboid Oil… we don’t know…. And we suspect, either do the people that came up with the idea.The government will have a public hearing on the Cannabis travel scheme next month. And in this case, we do mean ‘scheme’.

Meanwhile, the secretary-general of the FDA says they’re still working on the Cannabis Act which is expected to allow people over 20 years old to use cannabis for recreational purposes in a specific area approved by the authorities, just like a Sandbox program. At the moment, cannabis with traces of the high-inducing THC that are more than 0.2% is still illegal in Thailand.This big next step in Thailand’s cannabis laws follows the Public Health Ministry’s narcotics control committee removing cannabis from its narcotics list. The new Cannabis Act will focus on planting and growing cannabis at home for medical purposes, using cannabis as a herb, adding economic value to cannabis, and preventing it from being misused.

In the midst of already surging pork prices, there has been a recent outbreak of African Swine Fever reported at several Thai pig farms, exacerbating the problem even further. Farms that have detected the virus have to slaughter and bury pigs to prevent the disease from spreading, which will further decrease the number of pigs in the country. In Prachuap Khiri Khan, about 3 hours south of Bangkok, 117 pigs on three farms had to be slaughtered and buried. Authorities say that farms having less than enough breeding pairs will cause even more pork shortage problems.The director-general of the Department of Livestock Development said that before the outbreak, there were an estimated 1.1 million breeding pigs in the market. That number has now dropped to around 660,000. He also warned that the situation will take 8 to 12 months to solve, because local piglets have to be at least six months old before they can be slaughtered. Thais consume roughly 18 million pigs a year.

The National Broadcasting and Telecommunications Commission is again vowing to clean up overhead communications lines stretching 400 kilometres throughout Bangkok and 2,000 kilometres in the provinces.The commitment is spelled out in an NBTC resolution approved by the board late last week.The move will clear up cable clutter as part of its three-year overhead cable management plan, working with municipal electricity and communications organisations.Work around Bangkok on some 400 kilometres of overhead cabling is expected to be completed this year and will start on February 15.Sadly there will be little left for Russel Crowe to put on his Instagram page after all the work is done.

Last week, China allocated the Philippines 19.5 million US dollars in military equipment as part of Chinese President Xi Jinping’s vow to help the Philippines government with not only anti-narcotics and anti-terrorism efforts, but also disaster relief missions.China has helped the Philippines modernise its military in recent years by sending high-capacity weaponry and equipment to support ongoing missions despite tensions in the South China Sea.The first shipments of military aid landed in the capital this week, according to the Philippine Department of National Defense, including rescue and relief gear for the country’s military forces.Drone systems, detectors, explosive ordnance disposal robots, bomb disposal suits, transport vehicles, ambulances, water purification vehicles, fire trucks, and engineering supplies would be delivered to The Philippines in addition to relief and rescue equipment.China and The Philippines have been in open dispute over territorial waters in the South China Sea which both countries, and other adjacent nations, still stake claim.

At least 19 people have been killed in clashes between two groups in the town of Sorong in Indonesia’s West Papua province, authorities reported today, with the majority of the victims dying after the nightclub caught fire.According to the head of the Sorong Police Department’s health division, one person was stabbed and 18 others died in the fire at the Double O nightclub. All the bodies were found on the second floor of the venue and were sent to the local hospital. The cause of the fire is being investigated by the police, who also said the first floor of the club was completely destroyed.

New figures from the International Federation of Red Cross and Red Crescent Societies show the entire scope of the devastation caused by Super Typhoon Rai, locally called Odette, when it hit the Philippines last month, causing damage to 1.5 million homes, which was more than any previous typhoon in recent decades.The Philippine Red Cross is bolstering its shelter assistance by shipping table saws, chainsaws, and generators to the typhoon’s hardest-hit areas, mostly islands in the central Philippines.Carpenters are also teaching locals how to build safer houses and bolster their farming and fishing equipment. Philippine Red Cross Chairman Richard Gordon says the typhoon was a much bigger disaster than the world realised a month ago.The super typhoon demolished or damaged more homes than any other storm in recent decades.Some 36,000 people are still displaced as the communities continue to mop up the affected regions.