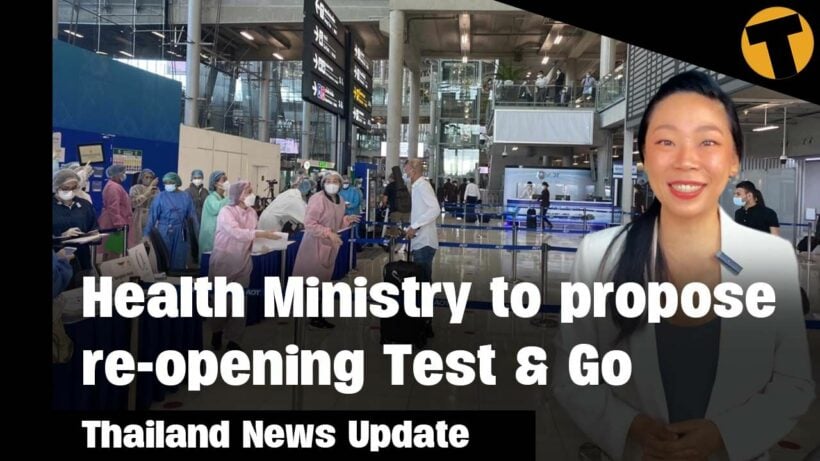 The Public Health Ministry says they’ll make a proposal to reopen registration for the Test & Go quarantine exemption scheme at this week’s CCSA meeting. The next CCSA general meeting, which is chaired by PM Prayut Chan-o-cha, is scheduled for Thursday.Registration for entry under the Test & Go program was closed following local fears over the Omicron variant in Thailand on December 21, but those who had previously registered have still been able to come to Thailand under the program. Test & Go allows vaccinated travellers to enter the country with just one night stay at an SHA+ hotel as they wait for their results from an on-arrival PCR test.Public Health Minister Anutin Charnvirakul noted the lower than expected case loads from Omicron and the low hospitalisation and death rate over the past month.The colour-coded zoning, which labels Thai provinces under various disease control measures, will also be discussed at the meeting and whether to make any changes. Currently 69 out of Thailand’s 77 provinces are labelled Orange Zones. The rest of Blue Zone tourist areas and also includes about 18 districts around the country.Warnings today from a top doctor at the Chulalongkorn University’s Faculty of Medicine. He says a Covid-19 infection could cause long-term side effects in people after they have recovered, including fatigue and cognitive impairment, according to The doctor, Thira Woratanarat, analysed over 80 research works of people previously infected with the virus.These long-term side effects, known as “long Covid,” can even impact people who were never hospitalised for Covid. He said, according to his research, adults are three times more likely to develop these long-term side effects than children, and women are three times more likely to develop them than men. One-third of people with long Covid need monitoring of their symptoms for six months, while another one third need more than six months.Thira noted some research findings show a chemical compound in blood samples among long Covid cases, indicating continuing inflammation processes. He recommended immediately taking a Covid test when experiencing flu-like symptoms such as cough, sore throat, fever, and muscle pains and seeking medical attention.His research has been mirrored by similar studies into the emerging phenomenon being called Long Covid.The ruling Palang Pracharath Party has failure to win two Lower House seats in last Sunday’s by-elections, both in the south, in Chumphon and Songkhla. But the MPs that won their seats were the their coalition partners, the Democrats.In both cases the losses of the Palang Pracharath Party were quite large, prompting politicos to wonder if Thailand’s conservative forces, backed by the army and the current Thai PM, may have run out of steam.But other political analysts are saying the losses aren’t an indication of any decline in the PPRP’s popularity. The campaign for the 2 southern by-elections was led by the party secretary, the 76 year old Prawit Wongsuwon and disgraced MP Thamanat Prompow. PM Prayut didn’t campaign in either of the electorates during the campaign.Meanwhile, two Palang Pracharat list MPs have offered their resignations as the party members and MPs to defect to a new party under former a Palang Pracharat leader.The Tourism and Sports Ministry is slashing its budget for the “Tour Teaw Thai” domestic travel subsidy program, while slashing the program’s projected tour packages from a million to 200,000 due to weak demand.The Tourism and Sports Minister Phiphat Ratchakitprakarn admits that, after three months of the program, the measure has proved ineffective to drive domestic trips or bolster local tourism.The Minister says local tourists normally take domestic trips independently with family and friends rather than using organised tours, especially during the pandemic because travelling as part of group tours with strangers was a potential health issue.But the Ministry says they will extend the program from the end of this month to the end of April if the existing 200,000 packages are used up.Thai border authorities have arrested 126 people from Myanmar for allegedly crossing the Thai border illegally over the weekend, evading the mandatory quarantine and immigration screening procedures. The 2,500 kilometre Thai/Burmese border has proven almost impossible to patrol as Thai authorities try to limit the number of Burmese crossing over illegally looking for work.The arrested people had reportedly crossed into Chiang Mai and Kanchanaburi provinces. Four men and eight women were caught in Sangkhala Buri District, while patrols found 38 men and 38 women hiding in bushes next to a pineapple plantation in Sai Yok District on Sunday.In Chiang Mai, the Fa Meuang force patrol found 19 men and 21 women in Fang District. Arrested individuals said they had intended to travel to Bangkok, Nakhon Prathom, and Samut Sakhon, for jobs they had been promised. As has been reported so many times in the past, some had paid or promised to pay high fees of 5,000 to 20,000 baht to agents in order to get to Thailand to find work. The job seekers were set to be deported after being processed in border towns.And China officials have cancelled plans to sell tickets to the public for the Winter Olympics in Beijing, as the number of Covid cases in the country reached its highest since March 2020, in the early days of the pandemic.Organisers said last year that there would be no international spectators at the Games – partly due to China’s weeks-long quarantine requirements – but they had promised to allow domestic audiences.But those plans were scrapped yesterday as China reported 223 new infections just three weeks before the Winter Olympics are set to open.Instead organisers say they are going to select people to act as audiences at the various Olympic venues… although it wasn’t outlined if this rent-a-crowd would be quarantined before or after their seat-warming activities.China is sticking to its strict policy of targeting zero Covid-19 cases even as the rest of the world has reopened.