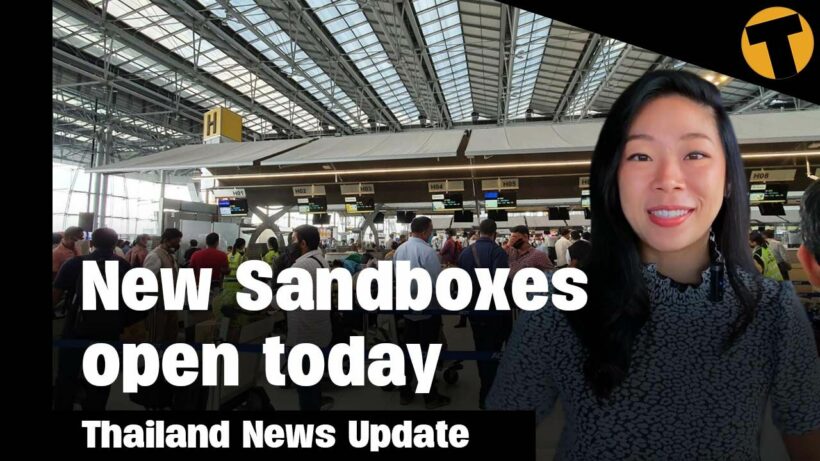 New cases of Covid-19 could leap over 20,000 a day by the end of the month unless precautions are taken seriously, that’s straight from the mouth of the CCSA spokesperson yesterday.She said that the current situation corresponds with earlier modelling by the Public Health Ministry that daily cases may surge past 20,000 by the end of this month, and even past 30,000 by the end of February. The modelling also indicated deaths could rise up to 60-70 a day again.She also stated that deaths are still low due to the large numbers of people being vaccinated.The Thaiger would like to add that overseas studies have also indicated that the pathology of the Omicron variant is much more transmissible but leads to lower hospitalisations and a lower death rate compared to earlier variants. The Omicron variant of Covid-19 has now been confirmed in 71 out of Thailand’s 77 provinces as of Sunday, whilst the earlier Delta strain currently accounts for the most infections at around 65%… but that in January the majority of new cases have been linked to Omicron.The CCSA also announced that their modelling predicated that Covid-19 would be finally downgraded to endemic status in about a year.As of this morning, the provinces with the highest number of new infections are Chon Buri Samut Prakan, Bangkok, Phuket and Ubon Ratchathani.Starting today, some entry restrictions lift for people travelling to Thailand from countries in Africa. Travellers from countries in Africa, who have been earlier approved to enter through the Alternative Quarantine program, can now apply to enter under the more relaxed Sandbox entry programs, which allows travellers to roam freely around four province or districts, rather than having to isolate at a hotel.Early on, after the initial emergence of the Omicron variant, the Thai government set emergency orders suspending the issuance of the Thailand Passes to people from eight African countries considered to be at high risk of the strain and imposed a 14 day quarantine on arrivals from all other African countries.The CCSA recently decided to lift those restrictions and travellers from African countries are now subject to the standard entry requirements for international arrivals.Fully vaccinated travellers can either undergo a 7 day quarantine period at a certified Alternative quarantine hotel or resort, or enter under the Sandbox scheme where they can stay in Phuket, three islands in Surat Thani, Krabi or Phang Nga. Unvaccinated travellers must undergo a full 10 day quarantine. All travellers must undergo at least two PCR tests.As a side note, registration for the four Sandbox areas are open again today for anyone wanting to register under the Thailand Pass. The Test and Go program is currently suspended.If you want to join the Phuket Sandbox, you are required to fly directly into Phuket Airport… you won’t be able to transit in Bangkok. But to join the Samui, Koh Pha Ngan and Koh Tao Sandbox, you can transit in Bangkok, but you will have to have both the flights to Bangkok and then onward to Samui made in the same booking. Only Bangkok Airways is flying from Bangkok to Samui at this time.For people wanting to join the Phang Nga Sandboxes, you will fly into Phuket as well and then transfer by car or van, which will be organised by your SHA+ hotel. Phang Nga is 30 minutes north of Phuket and Krabi, about a 3 hour drive.Thailand Pass registrations reopen today for the 4 sandboxes or alternative quarantine programs if you wish to enter Thailand though a different port.Thailand’s Commerce Minister is threatening to take legal action against vendors for price gouging after egg prices shot up over the past week.The price for chicken eggs shot up by five to six baht per tray of 30 on Monday, with the Layer Chickens Association attributing the increase to the high cost of feed and vet drugs.The ministry had yet to approve any price increases for eggs or chicken products and he advised businesses producing or selling egg products to inform authorities of their production costs and seek approval before increasing prices.He said the Internal Trade Department was keeping a close watch on prices for egg products to minimise the impact on consumers already reeling from soaring pork prices.Thailand currently has about 50 million laying hens that produce around 40 million eggs per day, mostly for the domestic market.Which begs the question… what comes first? The Chicken or the egg?And whilst we’re talking about surges in food prices, pork prices are also soaring. Some street food vendors have even been forced to up their prices for pork soup and dishes by 5 to 10 baht, while others have just stopped selling due to the high market prices. Wildlife officials across the country have also noticed a sudden increase in locals hunting wild boars to try and find their own solution to the current pork price hikes.A senior Thai virologist is dismissing the emergence of a new COVID-19 variant, unofficially dubbed “Deltacron” as reported in Cyprus. Dr. Anan Jongkaewwattana of the National Centre for Genetic Engineering and Biotechnology, says that it is possible that the RNA of both the Covid Delta and Omicron variants were contaminated in laboratories.Following on from other early scientific commentary on this new DeltaCron phenomenon, the doctor said that, if there is a new variant as claimed, it must have been separated in the sequencing process.He said that there is a high probability that the Delta or Omicron variant may have been tainted during the genome sequencing process… urging virologists concerned to be more cautious and not to jump to a public conclusion that they have found a new variant.Several other international scientists are also voiced their skepticism that DeltaCron is a “thing” and that the new alleged strain “is not real”.