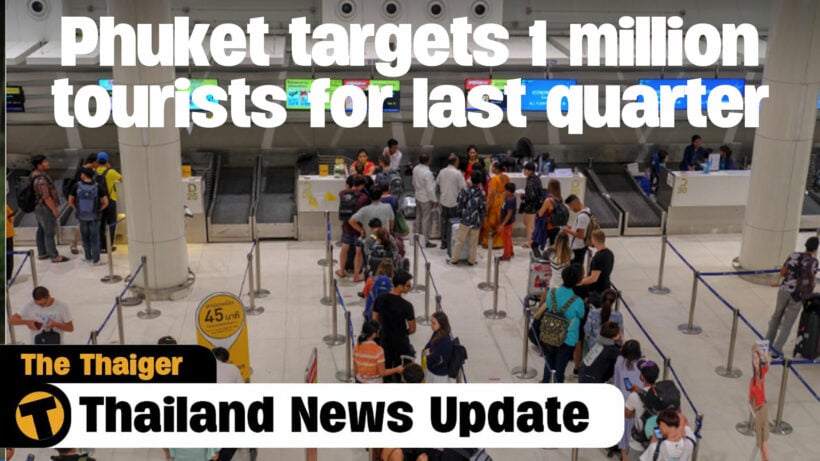 Phuket is gearing up plans to attract 3.5 million international tourist arrivals by the fourth quarter of this year.

President of the Phuket Tourist Association, ภูมิกิตติ รักแต่งาม, said foreign arrivals have increased to 3,000-5,000 per day since May 1st, compared with 400-500 per day during the sandbox period and 2,500 per day under the “Test & Go” scheme, following the recent easing of travel restrictions.

Mr ภูมิกิตติ said India has contributed the most inbound foreign tourists this month, with an average of 1,000 per day. Followed by Australia, with around 10,000 visiting Phuket in April. Other leading markets for Phuket were the UK, Singapore, Malaysia, and Saudi Arabia.

He also mentioned that concerns over the viral situation should no longer be a huge concern and is optimistic that the island can potentially draw 3.5 million foreign tourists this year.

Mr. Bhummikitti’s strategy to lengthen the stay of each tourist from 4-5 days to 6 is through recreational activities and attractions. He believes that instead of prioritising volume, the island would benefit more if they lure in high spending tourists with activities and new tourism sites.

In the first four months of 2022, Phuket has seen over 3 hundred thousand international visitors so far.***

Mor Chana was once commonly used to track coronavirus cases and notify people if they had been exposed to Covid-19.

Mor Chana, which was launched on April 29, 2020, used GPS and Bluetooth to track the movement of users, who were expected to use the application to scan a barcode to “check-in” to venuesduringthe height of the pandemic.

In January 2021, health minister Anutin Charnvirakul said anyone who contracted Covid-19 without having previously downloaded and used the app would be subject to up to two years imprisonment and a fine of up to ฿40,000. The threat was criticised as unfair to people without smartphones.

However, over time, use of the Mor Chana fell out of use, and many venues no longer expected attendees to “check-in” using the app.

Yesterday, Mor Chana made an announcement via Facebook that the application will be discontinued from June 1. ”***

In a case of a good intention gone bad, A man from the Isaan province of Buriram is being convicted for allegedly stealing 300,000 baht from his stepmother because he wanted to “make merit” by giving it away.

CCTV footage shows 39-year-old Wuttisak sitting on a motorbike and spreading banknotes all over the floor at a local market in Buriram province on Saturday at 3 am. Locals and merchants were tripping over each other trying to collect all the cash.

Her stepson stole her bank card and used it to take money out at the ATM, before giving it to locals… out of the goodwill of his heart.

Thai media reported that 70-year-old Somwang filed a complaint at สะตึก Police Station in Buriram province on Monday. She asked the police to help her track down the cash. The Superintendent of Satuek Police Station said police had visited the market to urge sellers and residents to return the cash. They said anyone identifiable on the CCTV could face charges if they didn’t return the money.

Wittasuk admitted stealing the money and handing it out at the market in the early hours of Saturday morning. He apologised to Somwang, saying the reason he stole the cash was that he wanted to make merit for his deceased father. He said he wouldn’t do it again.***

Police are investigating the death of an elderly lady who died under a toddy palm tree in the northeastern province of Nakhon Ratchasima yesterday.

The woman, 78-year-old Dee Namchanad, was out cutting down toddy palm fruit to sell at the market when the fruit hit her in the head and killed her.

A 6-meter-long stick of bamboo with a knife attached to it was found next to Dee’s body.

Dee’s 45-year-old relative วิถาวดี วงนอก said he was driving back from the market when he noticed someone lying face down under a palm tree in the middle of a rice field. When he got closer, he realised it was his relative, so he called for help, but Dee had already died from her injuries.

Dee’s body has been returned to her family who will carry out religious ceremonies.***

A man in Phuket is mourning the death of his sister, after coming home to see her lying lifeless with bite marks on her neck yesterday morning.

Sirinat was taking care of her brother’s two Thai Ridgeback dogs while he was away on a business trip to Bangkok. One of the dogs had traces of blood on its mouth and fur.

Police found 38-year-old, Sirinat’s body on the balcony of her home with multiple bite marks on the left side of her neck. The suspected culprit is a 1-year-old Thai ridgeback belonging to her brother, who has raised it for 5 months so far.

Sarinrat lived with her three siblings in the house in the Thalang district, who were all away in Bangkok together on a business trip when the incident happened. The woman’s siblings think that because Sarinrat suffered from muscle weakness and difficulty walking, she may have accidentally fallen down on top of the dog while feeding it, shocking it so much that it bit her to death.

The neighbours said they heard a cry from the detached house between 6 am and 7 am this morning, but no one dared check for fear of the dogs.***