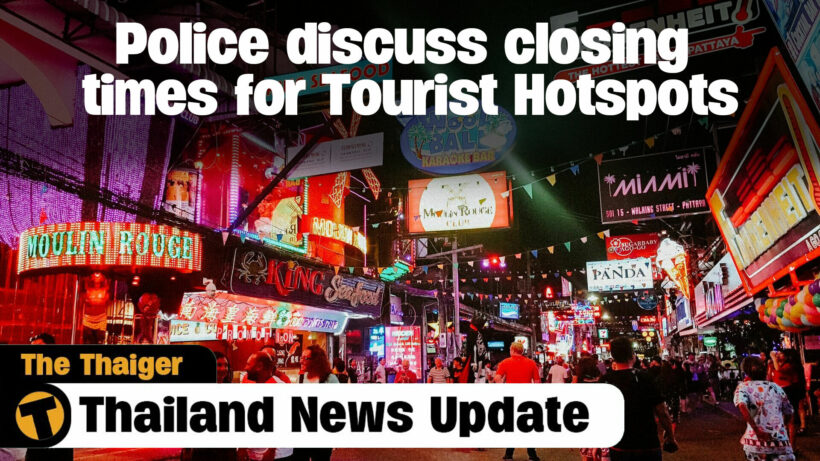 The Election Commission is holding a public campaign today at City hall urging all Bangkok residents to vote during this years Bangkok’s election on May 22nd.

Trucks with loudspeakers will drive through all 50 of Bangkok’s districts. Speakers will urge people to exercise their voting rights, as this is the first governor election in 9 years. ——Candidatesregistered at City Hall in March, each promising to improve a number of conditions. The ไทยสร้างไทย candidate, สิธา ทิวารี, vows to improve Bangkok’s flood drainage system and traffic management if he wins. The Democrat Party Candidate, สุชัตวี สุวันนะสวัสดิ, promises to introduce wi-fi coverage throughout the capital.

The Move Forward candidate วิโรจ ลักขณาดิสร promises to remove fences aroundSanam Luanga public square and park in Bangkok, to give the public more access to it.

The election’s director warned candidates not to do anything beyond the permissible legal limits of election spending, authorities, and duties. He said campaigning has so far mostly been within the law, except for some complaints about campaign posters. He also said that some councilor candidates exceeded their authority in electioneering. Lastly, he said that some campaign staffers had given T-shirts to their children, who are not part of their staff, warning that this could be deemed as buying votes.***

Thailand’s most famous policeman, ‘Big Joke’, aka. สุรเชต หักพาล has plans to discuss legal closing times for ‘restaurants’ in Pattaya, Phuket, and other renowned tourist hotspots where the closing time issue continues to be a hot topic. Bars and clubs in Thailand, under official laws, are still only allowed to reopen as ‘restaurants’, and only until midnight at the moment.

At a Phuket press conference on Friday, the Assistant of the National Police Chief Lieutenant General Surachate Hakparn told The Phuket Express that police are going to discuss the closing times with the CCSA and relevant officials in Phuket, and elsewhere. Surachate stressed that he sympathised with how business operators are struggling to earn money under the country’s current restrictions, which only just made theclosing time midnight, instead of 11 pm, on May 1.

Officially, bars and nightlife are meant to be closed at the moment, and only through a loophole allowing them to register as ‘restaurants’ are they able to open at this time. But the bar and business owners say “it’s time” to get things back to normal and allow them to reopen without all the paperwork and unnecessary restrictions still imposed.

Surachate says he understood that Pattaya in particular is pushing to extend the closing time, as well as fully reopening its nightlife (this would mean bars and clubs can open ‘officially’ and not as ‘restaurants’). He gave a cautious response to reporters, saying…

“However, this depends on the province and the disease control committee, and the Center for Covid-19 Situation Administration, CCSA. I understand how business operators and entertainment venue operators feel. EVERYONE IS suffering!”

Officials in Pattaya alsoheld a meetingabout closing times last week after the city’s famousWalking Streetclosed to cars at certain hours for the first time since the Covid-19 pandemic broke out, allowing the street to open to ‘walking’ customers again. This, along with Thailand’s entry restrictions being eased since May 1, is expected to bring more tourists back to Thailand. Representatives from the local bars asked to make the closing time 3 am, instead of the current midnight.

Pattaya has suffered tremendously under the tight alcohol curfews, with over-zealous crackdowns by police over “violating Covid-19 curfew rules”. Just a day before the curfew was extended to midnight, Pattaya policeraided 2 ‘restaurants’last night at around 11:30 pm for allegedly serving alcohol past 11 pm.***

a 23-year-old South African woman praying for justice as she is locked up in a Thai prison in Nakhon Si Thammarat Central Prison.

,Ashley Oosthuizen, who has been sentenced to life in a Thai prison, has finally been able to speak to her mother after nearly 3 months of Covid ‘quarantine’”.

She was sentenced after being accused and convicted by a Thai court of accepting a package of MDMA at the Koh Samui restaurant in late-2020.

Ashley had worked as a kindergarten teacher on Koh Samui before she got laid off during the pandemic. It was reported that she had difficulty finding a full-time job offering a work permit. She met her then-boyfriend, American expat Tristan Nettles when he offered her a job as a manager at a new breakfast and brunch restaurant, which would secure her with a valid work permit.

Tristan is a self-confessed “international dark web drug dealer”, who used Bitcoin to make the sales and import drugs through a school’s main office. In 2020, Ashley then signed for a package containing250 grams of MDMA, an ingredient in ecstasy, according to a GoFundMe account.

Earlier this year calls for Ashley’s release were renewed and several South African media outlets reported on the case after Tristan made a website outlining what he says are details of the drug operation. He claims that Ashley was not involved.

Ashley is currently incarcerated in the Nakhon Si Thammarat Central Prison, in the southern province of Nakhon Si Thammarat. On Friday, Ashley was able to speak to her mother for the first time since February. All inmates have reportedly been quarantined after a few people were infected with Covid-19.

Ashley’s mother, Lynn Blignaut, says Ashley is kept in a cell with 67 other women all sharing one bathroom. Lynn told the media outlet, George Herald…

“By the grace of God, our daughter was not affected at all and is still in good health and high spirits. We are able to speak with her once a month, for 10 minutes.”

George Herald reports that Tristan claims he is currently voluntarily fighting in Ukraine against Russia to put the spotlight on Ashley.

A family spokesperson, Lizelle Martin, who has been assisting with Ashley’s case, says that there was no evidence found at her apartment and “her drug tests also came back negative”.

“During her interrogation, Ashley was also afraid that she would be assaulted by the officers as the officers spoke loudly and intimidatingly to her. It is very well known that interrogations in some Thai police stations are synonymous with rape and violence. Therefore she signed the arrest report/search warrant without understanding it”, according to a quote in theGeorge Heraldarticle.

The Thaiger has received numerous emails from ‘Tristan Nettles’. We are unable to verify the Gmail account or the contents of the email, but publish the information as it appears to be accurate and the letter has been republished by other media outlets.

“I am volunteering as a freedom fighter inside of Ukraine with the Wolverines, part of the Ukrainian Foreign Legion. I am a former USMC 0351. I am fighting to free Ashley Oosthuizen and to help free Ukraine.***

National Tree Day is coming up next Friday, May 13, and Phuket is getting ready to celebrate! Phuket authorities plan to host a public event where people can come and plant trees. The event will start at Wat Kosit Viharn Temple, off Thepkrasattri Road in Rassada, and move to Toh Sae National Forest reserve, which is behind the temple off Damrong Road.

The event will begin at 8 am with religious ceremonies at the temple, and registration will begin at 8:30 am. Phuket Governor Narong will then give an address at 9 am, and tree planting will start at 10 pm. Attendees are asked to wear yellow at the event. They must also comply with Covid-19 restrictions, including wearing masks, passing a temperature check, and cleaning their hands with alcohol. PR Phuket provided details about the event in a Facebook post.

As a major tourist hub, Phuket struggles to maintain its environment. Last year, the hospitality brand Banyan Tree Group launched an “Earthday Getaway Campaign” at its resorts in several provinces, including Phuket. Each night’s purchase or stay during the period contributed US$2 to earthday.org and its reforestation programme, and The Canopy Project, which works with groups around the world to plant trees.

Following the Covid-19 pandemic and the huge drop in tourism, some of Phuket’s environment has recovered. In December last year,more turtle nestswere spotted in Phuket than were rarely seen in the days before the pandemic, according to the Phuket Marine Biological Centre.

Last week, the president of the Kamala Tambon Administrative Organisation said that since the Covid-19 pandemic broke out,fish populationsthat were gone years ago have now reappeared.

As Thailand plans to reopen schools on May 17, a store owner in Northern Thailand’s province of Nakhon Sawan is donating old school uniforms to families who don’t have the money to buy their own. The store owner said that this is the second year the donation handout has been organised.

He said that last year, there was a similar event, where parents came to give away old school uniforms to children in need. The store owner said that the store is now accepting donations for old uniforms.

This news comes as Thailand’s Department of Internal Trade is working with retailers to provide 10-69% discounts on school uniforms. All seven branches of Suksapanpanit stores, which are under state supervision, will slash the price of uniforms by 50%, and textbooks by 20-40%.

Other retailers participating in the discount include Samothong Garment, Nomjitt Manufacturing, TOPSON 1994, Somjainuk Teves, Bangkok Atlantic, and The Nanyang Marketing.

In some cases, Thais who can’t pay for school uniforms have resorted to stealing them. In 2020, a woman was detained forshoplifting school uniformsfor her children in southern Thailand. The woman said she was struggling financially due to the Covid-19 pandemic and had no choice but to shoplift as she was unable to afford the cost of the uniforms. The woman, aged 26, was with her 8 year old daughter in a shopping mall in Chumphon, when security guards noticed her shoplifting skirts, shorts, and shoes. She was detained in the backroom of the store while police were called.***