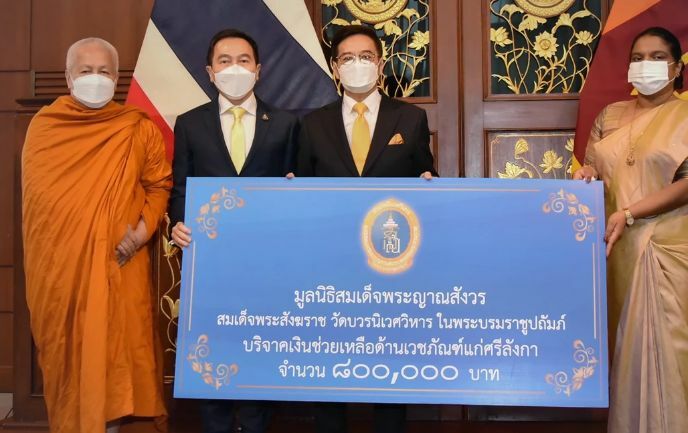 Thailand is pitching in to help Sri Lanka in its tumultuous economic crisis. Thailand’s Foreign Ministry announced yesterday that the country has donated medicines, medical supplies, food, and financial support to Sri Lanka. Several departments made donations adding up to about 5 million baht, while the Foreign Ministry donated another 1.3 million baht worth of medical supplies to Sri Lanka.

This news comes after Sri Lanka issued an urgent appeal on Monday for help feeding malnourished children. The secretary of Sri Lanka’s Ministry for Women and Child Affairs, Neil Hapuhinne, said that out of the 570,000 children under 5 years old in Sri Lanka, the ministry had counted 127,000 malnourished children in 2021. The ministry is seeking private donations to feed possibly several hundred thousand children.

UNICEF has also issued an appeal for funding, saying that children in Sri Lanka were disproportionately affected by the severe economic crisis.

Thailand’s donation to Sri Lanka was made with help from several departments. These include the Department of Disease Control, the Public Health Ministry, Government Pharmaceutical Organisation, and Thai Red Cross Society, among others. Other Thai public and private sectors are also considering providing additional help to Sri Lanka. The announcement of the donation read…

“The donations reflect the close and cordial ties as well as the goodwill between Thai and Sri Lankan peoples.”

Sri Lanka plunged into chaos in April, after the country experienced a 13-hour power blackout, its longest blackout ever recorded. Since then, the country has been unable to pay for fuel, medicine, and other necessary items.

Hapuhinne said that over 90% of Sri Lankans are now relying on government handouts. This includes 1.6 million government employees. He said the number of handouts has nearly doubled in the past year.

Thailand backs ‘One China’ policy amid US Taiwan PR disaster