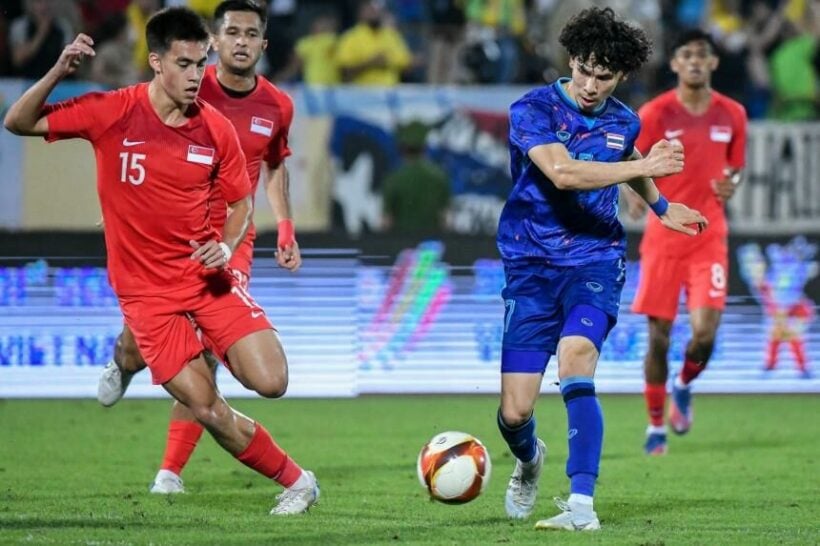 Yesterday, Thailand’s under-23 team beat Singapore 5 – 0 at the Southeast Asian Games in Hanoi, Vietnam. The landslide win gained the War Elephants their first 3 points at the SEA Games 2022 at the Thien Truong Stadium.

The Thai team’s win was well received after the team lost their first match in the competition 2 – 1 to Malaysia on Saturday.

Thailand’s first goal of five was scored by Phuket-born 21 year old Ben Davis, who represented Singapore at youth-level and later signed for Fulham Football Club, making him the first Singaporean to sign for a English Premier League team. Davis currently plays for Oxford United and chose to represent his birthplace Thailand in the SEA games.

The War Elephants didn’t give Singapore’s Lions much chance to possess the ball. But in the 30th minute, Thailand’s goalie saved a close shot fired by Singapore’s Harys Stewart.

Ekanit scored again from inside the penalty box in the 66th minute, marking Thailand’s fourth goal. In the 81st minute, Korawich Tasa sealed Thailand’s win with a fifth goal after some clever passing and footwork.

The win took Thailand to the top of Group B, equal to Malaysia and Cambodia, but with more goals up their sleeve.

Losing 5 – 0 was Singapore’s biggest loss at the SEA games since losing 8 – 1 to Burma, now Myanmar, at the 1971 Southeast Asian Peninsular Games.

Thailand have won gold at the SEA games an impressive 16 times. Whether the War Elephants could bring back gold for the 17th time will depend on the result of their upcoming game against Cambodia this Saturday, when the two teams will fight for a spot in the knockout round.

Shootout between a drug dealer and police, 2 dead