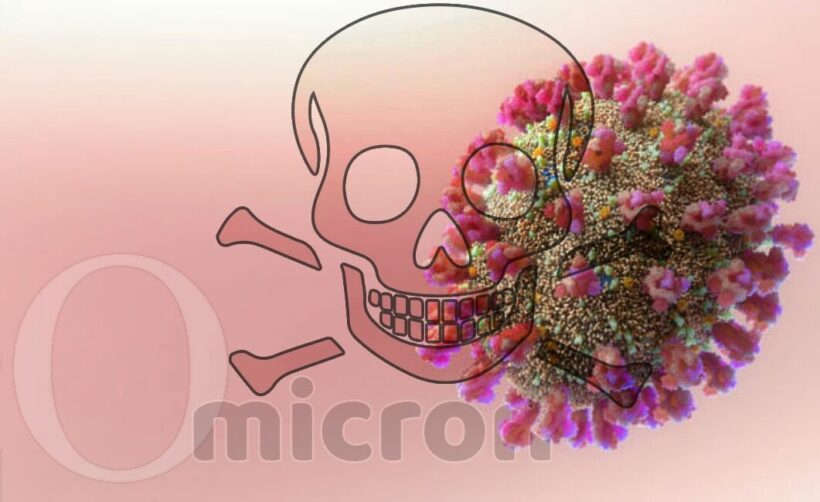 An official from the Ministry of Public Health announced that today Thailand had its first reported death from the Omicron variant of Covid-19. The death was recorded in Songkhla province in the south of Thailand and was an 86 year-old woman from Hat Yai.

The Omicron variant has been spreading quickly through Thailand as it is much more contagious than other strains but has also generally proven to be weaker and less deadly than the Delta variant it has largely replaced. When it was first detected in the country, the fear of a massive outbreak led officials to cancel the Test & Go programme that allowed international travellers to enter without quarantine, putting the brakes on Thailand’s attempt at tourism recovery.

Now the kingdom has confirmed over 10,000 Omicron variant infections, so it was only a matter of time before the first death of the milder but more transmissible strain occurred. But as the daily infections that had fallen below 3,000 per day have now climbed back up to over 8,000 a day, hospitalisations have increased but not at the same rate as infections, and today a record low of just 9 deaths were recorded from Covid-19.

The woman who became the first death from the Omicron variant infection was not in good health. A spokesman for the Ministry of Public Health said that the 86 year-old had Alzheimer’s and was bedridden. She had received 2 doses of the Pfizer vaccine at Na Mom Hospital in Hat Yai where she lived. She had not yet received a booster shot which multiple studies show offers the best protection against the Omicron variant

While many argue that her death from Omicron should be discounted as she was old and feeble, her death is a reminder that while you may be healthy and unaffected by a Covid-19 infection, you may come in contact directly or indirectly with someone who is not as young and healthy. The woman contracted the Omicron infection from her grandson who had travelled to Phuket and back and brought back the virus with him.

Of the approximately 72 million people living in Thailand now, about two-thirds have had 2 Covid-19 vaccines, but only around 15% have had the needed booster shot. As the Omicron variant fuels what has been labelled Thailand’s 5th Wave of Covid-19, more than 2.3 million people have been infected and 22,000 people have died from the virus.

13-day quarantine enacted for travellers from Thailand to Japan