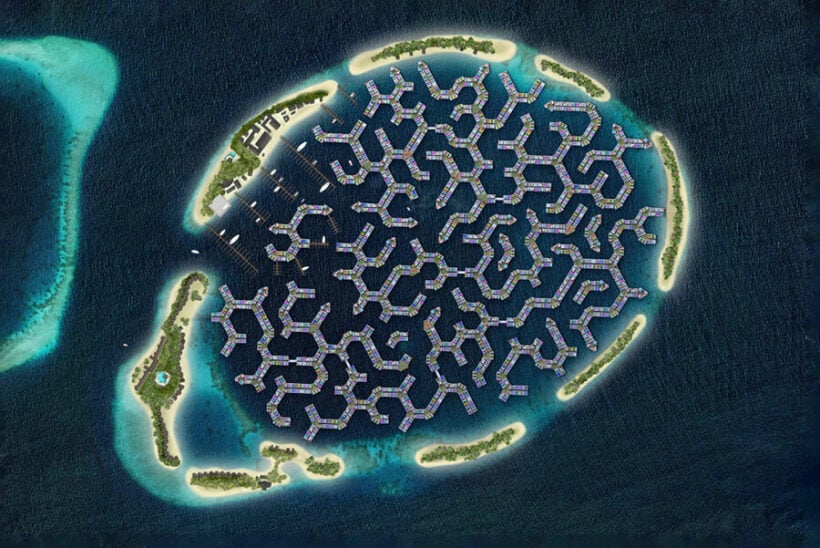 Run out of space? No problem. Just build on another room. In the case of an entire country that is sinking into the Indian Ocean, the situation becomes a bit more acute. Technically, The Maldives isn’t sinking, the sea levels are rising and slowly swamping the low-lying Indian Ocean nation, scattered south west of India.

The Maldives, a country of some 500,000, is slowly being engulfed by the sea and its residents becoming ‘climate refugees’. 80% of The Maldives is less than 1 metre above sea level. The effect on the outlying islands has already been profound over the past 30 years and is now seriously threatening the country’s tourist-driven economy.

Back in 1988, local authorities estimated that sea rise would “completely cover” The Maldives, comprising 1,196 small islands, within the next 30 years. Most of the islands survived this dire prediction. But the Intergovernmental Panel on Climate Change’s 2007 report predicted the upper limit of the sea level rises will be 59 centimetres by the end of this century, meaning that most of the republic’s islands will be actually submerged and the 200 remaining inhabited islands will be uninhabitable. Other reports have estimated the rise could be as high 1 metre by 2100.

The Maldives is the world’s most obvious and acute sufferer of the rising sea levels caused by climate change. Apart from looking to relocate in neighbouring India or Sri Lanka, the government and residents are now undertaking massive engineering projects as a long-term solution.

The capital Mali, is one of the most densely populated places in the world. 200,000 people are squeezed into an area of around 8 square kilometres.

And there’s nowhere to go, beyond reclaiming more land from the sea. But it doesn’t solve or prevent the problem that the the rising sea will just inundate the current city soon enough.

The idea of man made islands isn’t new. But this time the new islands won’t be attached to the sea bed. The entire island will be floating.

The project — a joint venture between property developer Dutch Docklands and the Government of the Maldives — is not meant as a wild experiment or a futuristic vision: it’s being built as a practical solution to the harsh reality of sea-level rise.

The Maldives project, to construct a city for 20,000 people in less than 5 years. There are other planned floating islands and cities, such as Oceanix City in Busan, South Korea, and a series of smaller floating islands on the Baltic Sea, both developed by Dutch company Blue21.

But The Maldives Project, interns of scale and timeframe, is a much bigger project. And it’s not a fanciful set of drawings and ideas, it’s a real project that the government of The Maldives are fully backing as a step to saving their country.

From above the floating island will appear as a brain coral and comprise of 5,000 individual floating units which will include houses, restaurants, shops, schools and municipal buildings and infrastructure. With a touch of Venice, canals will run in between. The new residents will start to move in early 2024. The entire floating city will be be completed by 2027.

If you live on the floating island you can get around by boat, or wander along the floating causeways. It will be around a 10 minute ride to the current capital of Mali and international airport. The Maldives already has a developed system of transport from island to island.

In the future the government intends to roll out the concept, that will simply rise with sea levels, for tourism developments as well. It is also expected that the country will eventually relocate much of the residential population into similar floating island communities. and the original islands will simply be natural protection from bad weather and high waves which can periodically be artificially raised with rocks to become wave barriers.

Chadchart’s plan to complete a cable project started in 1984