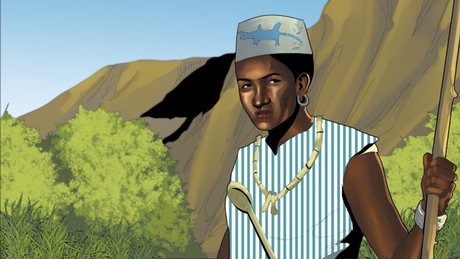 Dahomey (located in present-day Benin) was one of the most potent ancient African kingdoms where fifteen kings succeeded each other, but there is hardly a trace of women in the royal manuscripts. Yet women distinguished themselves on several occasions, and one woman even ruled the kingdom.

Who was the first Dahomey Amazon?

According to historian Bienvenu Akoha, the first Amazon was Tassi Hangbe, daughter of King Houegbadja, founder of the Dahomey kingdom, and the twin sister of King Akaba. In 1708 after the latter’s death following a long illness, she was silently installed as the head of the military. It was only after returning from her military campaigns that she was publicly proclaimed Queen of Dahomey.

Learn about the other Benin: Oba Ewuare: Bronze king of Benin City

What was Tassi Hangbe’s impact during her reign?

Despite reigning for just three years, Tassi Hangbe had enough time to draw attention to women. She decided that they should go hunting and take care of farming. Both activities were previously reserved for men. She also developed agriculture and facilitated the supply of free drinking water to all her subjects.

How did the Dahomey Amazons distinguish themselves?

Tassi Hangbe had rapidly understood she would not be able to act as she wished, so she formed an all-women battalion with the best warriors. Those Amazons known as Agoodjie in Fon language (meaning the last defense before the king) were recruited and trained from their earliest childhood. Their fierce training turned them into more efficient warriors than men. During warfare, they were merciless, to the point that they would behead anybody who resisted them.

A few decades after Tassi Hangbe, King Guézo reigned over Dahomey. He rapidly understood the advantage he could have with the Amazons at his side, with the legendary Seh Dong Hong Beh (Sê do Houngbé in Fon) as their head. They would bring him prisoners whom he would deliver to a slave merchant from Brazil in exchange for guns, gunpowder, tobacco, and alcohol. That lucrative traffic enabled the Dahomey kingdom to strengthen its power.

What is the Dahomey Amazons’ legacy?

In 1882, King Behanzin, who wanted to protect his commercial rights, went to war against France. Faced with a better-equipped French army, the Amazons suffered tremendous losses. Despite committing what today would amount to war crimes, the Amazons are regarded as a symbol of female emancipation. After being ignored for years, they are now gradually being honored. In Abomey, a museum commemorating Tassi Hangbe is being built. Besides, she is celebrated by her descendants with festive ceremonies involving singing and dancing.

The Amazons: The female strike force of the Dahomey Kingdom