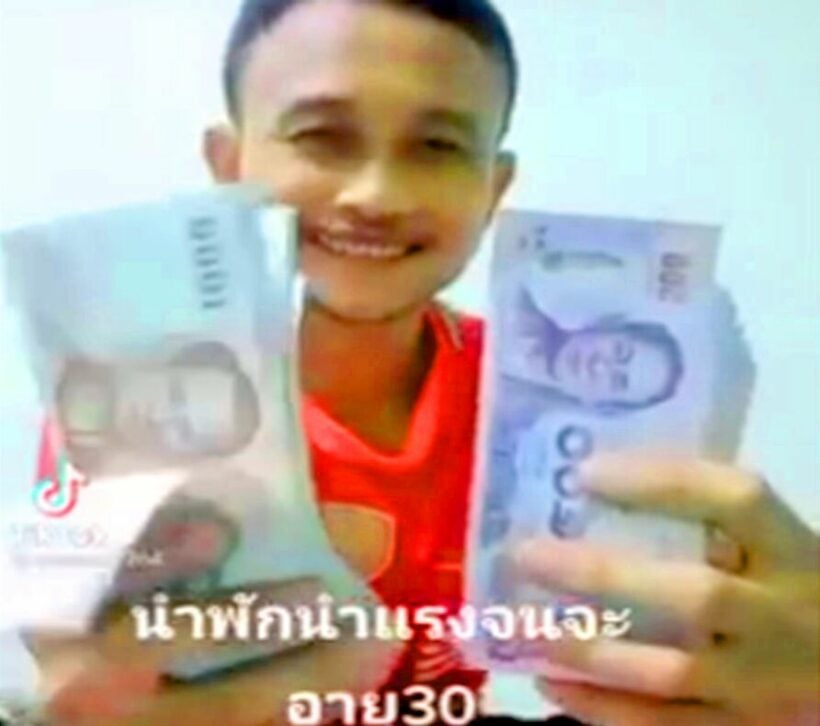 One common lesson that seems to need to be learned and relearned frequently in the age of sharing your life on social media is: if you’re doing crimes, maybe don’t post about it online? Police in Chon Buri arrested a man in Chon Buri after he posted a video on TikTok waving fistfuls of cash and bragging about earning so much money.

But, as you might have guessed, his definition of “earning” is a bit… flexible. While TikTok user @Joker764 claimed in the video he posted that the wads of cash were the result of waking up early to work hard and earn money to pay off debts, police quickly discovered that the money was stolen.

When they searched the 29 year old Surin native’s house in tambon Bang Sai in Muang district of Chon Buri, they uncovered cheques worth about 32 million baht and well as 220,000 baht in cash stashed. It turns out Joker764 was hard at work robbing a local business, Kiattithayakorn Metal Co, which had reported a break-in on the evening of August 11.

The company told police a safe with cash and other valuables was stolen and they had security cameras that captured the thief. Police were surprised to easily identify the TikTok braggart – he was wearing the same clothes in the security video as he was wearing in his post on the popular social media app.

When police investigating the theft stumbled upon the social media video post, they were able to ascertain his name and address and track him down in his room. He was arrested and charged with his theft, foiled by his need to show off on TikTok.

But maybe his social media post was true, and he was planning to use the money to pay off debts – when he was caught, Chon Buri police recovered almost all of the money stolen, minus 150 baht the TikTok thief said he spent on food.