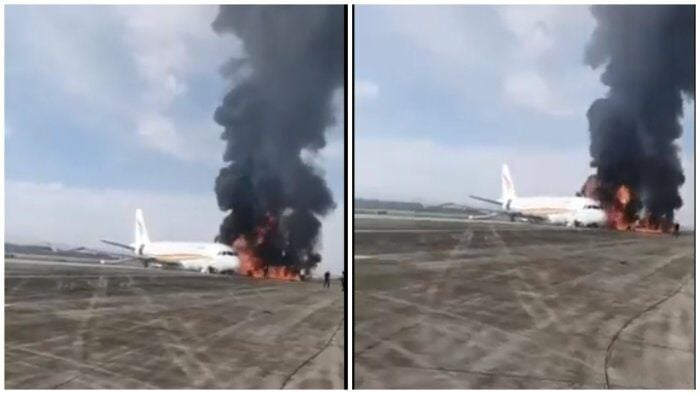 A Tibet Airlines Airbus A319-100 veered off the runway and burst into flames during takeoff at an airport in Southwest China this morning. All 113 passengers were safely evacuated although 36 passengers suffered minor injuries, according to the Civil Aviation Administration of China, or CAAC. China’s aviation regulators are investigating the cause of the incident.

In a statement posted on Weibo, Tibet Airlines said the plane faced “abnormalities” on the runway, so the pilot aborted the takeoff, but didn’t provide any further details. The plane was set to fly from Chongqing Jiangbei Airport in southwest China to Nyingchi in the Tibet Autonomous Region.

Videos on social media show the 9 year old Tibet Airlines aircraft, a subsidiary of Air China, engulfed in a huge cloud of black smoke. Evacuated passengers can be seen running from the plane.

The CAAC provided the following details of the incident…

“According to the flight crew, the plane experienced an anomaly during takeoff. They stopped the takeoff following the procedures. After the plane skidded off the runway, the engine scraped the ground and caught fire. The fire has been extinguished.”

Chongqing Jiangbei Airport said the fire happened at 8:09am and flights at the airport have since resumed as normal.

Tibet Airlines is based in Lhasa and has a fleet of 39 planes including 28 Airbus A319s, a smaller version of the popular, single-aisle A320.

In 2019, A Tibet Airlines Airbus A330-200 was flying 11,000 metres above land near Guiyang in China when the right hand cockpit windshield cracked. The crew diverted the plane to Guiyang where it landed safely.