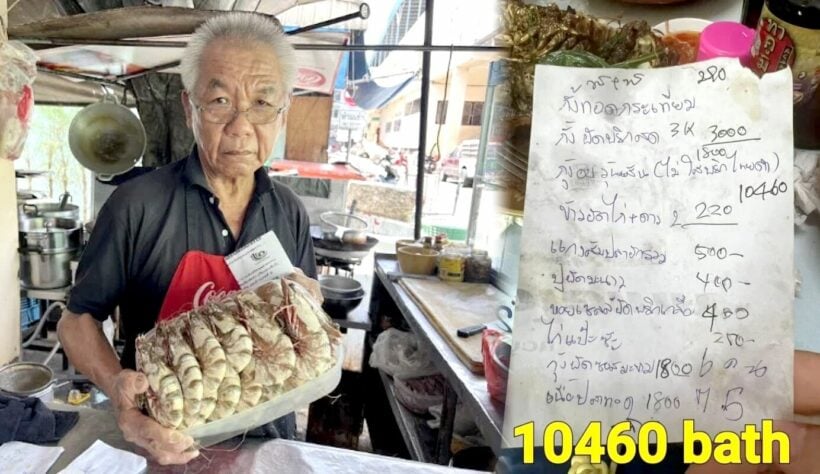 Gourmet meal or a price-gouging steal? An angry restaurant owner is firing back at a TikTok post claiming he was overcharging after a customer racked up a bill of over 10,000 baht. The restaurant in question is Khon Boran on Ranong Road in Phuket Town, while the TikTok poster, a Thai tourist, says he paid too much for his meal, the owner insists his prices are based on the quality and size of the meals he serves.

The tourist did admit that he was dining with a big group and that they ordered a number of special meals, but complained they were shocked when the bill came, saying that it was delicious when they ate, but expensive when they paid. While it may seem like a case of an appetite bigger than their wallet, there is a legal issue at hand for this Phuket restaurant, as the menu at his restaurant contained pictures of the meals available, but no pricies listed.

The Phuket Provincial Commerce Office enforces the law that prices must be displayed and made clear for food vendors, often acting within a day about claims of unlisted prices or dual pricing for foreigners. At the yearly Phuket Vegetarian Festival, Vice Governor Pichet Panapong warned the street vendors that prices must be displayed clearly and that penalties for charging higher prices can be serious.

“Vendors found not displaying their prices face a penalty of a fine of up to B10,000 while those who charge customers prices not according to those displayed face a fine of up to B140,000 or even up to seven years in jail, or both, depending on the severity of the offence.”

In this instance, the diners had ordered several dishes for 1,800 baht each for various seafood items and 3 kilogrammes of fried crayfish for 3,000 baht. The owner of the Phuket Town restaurant justified the expensive prices, citing the high-quality dishes and pointing out that several can serve six to nine people each. More simple dishes like fried rice with chicken and egg were only 220 baht, though a plate of plain rice is a costly 150 baht.

The owner claimed that in 40 years of operating, nobody has ever complained about the high prices of signature dishes and angrily dismissed the disgruntled customer with harsh words.

“What should I do to meet such an idiot who wants to eat good things but doesn’t dare to pay?Our dishes are not expensive, but you order expensive things.I never think of taking advantage of customers. Let customers eat to be full and think according to the price. There are many people like this in society, but he never showed manners because he is an unkind person.”

Regardless of the difference of opinion on costs, the owner may face scrutiny for the lack of displayed price. The chief of the Commerce Office has previously instructed people to report any gouging prices they run into in Phuket.

“Any person who sees someone taking advantage of the situation to unfairly increase prices or who has not received a fair trade can report or make a complaint at the Phuket Provincial Commercial Office by calling 076-219586 or the 24-hour hotline 1569.”

Whale shark washed up on a Krabi beach in Thailand