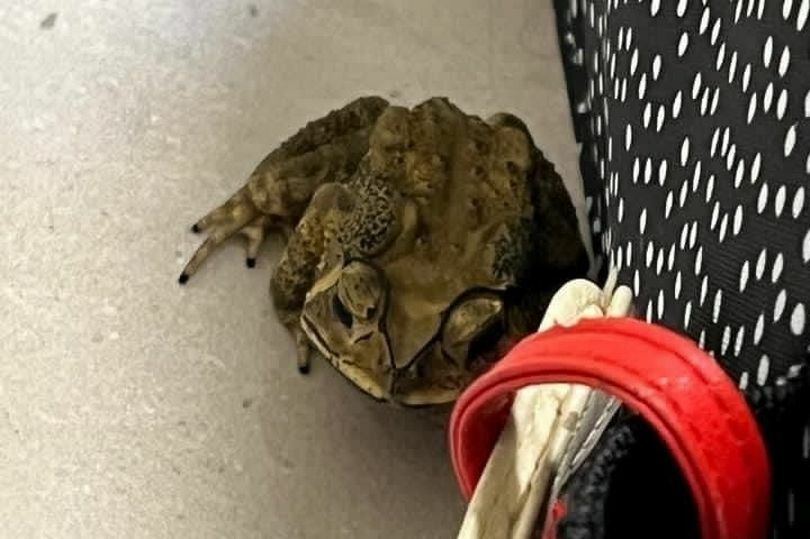 A university student was toad-ally shocked when an unfamiliar amphibian jumped out of her suitcase in Cardiff, Wales, having travelled over 6,000 miles from Thailand.

Hannah Turian recently completed her second her studying psychology at Cardiff University and went to Thailand to volunteer in a school during the summer break. After travelling for 35 hours, she finally reached home and unzipped her suitcase to get her toothbrush out at 1:30am. Then, she went to bed.

The next morning, she was speaking with her Mum on the phone when she noticed something strange, she told Wales Online…

“I was up early because I was quite jetlagged. I heard something moving and I didn’t know what it was. Then I saw something had moved in my suitcase so I shut the suitcase, ran out of my room and screamed.

“My housemate woke up and we carried the suitcase to the bathroom. A toad jumped out. I was so scared, because some things in Thailand are quite dangerous. We didn’t know if it was venomous.”

Hannah thinks it must have jumped into one of her trainers without her noticing. Maybe it wouldn’t have happened if she wore open-toad shoes.

Terrified that the toad could be dangerous, Hannah rang the RSPCA to ask for their advice. However, she was told no one would be able to collect the toad until the next day at the earliest.

The toad, parched from it’s 13-hour flight in a shoe, immediately hopped into a bowl of water put out by Hannah. Hannah named the toad Robbert.

Luckily, exotic pet lover Jackie from Cwmbran stepped in to rescue the toad, which she renamed Ozzy. Jackie added the amphibian to her collection of pets which includes a bearded dragon, a leopard gecko and a red iguana.

Jackie showed up wearing gloves incase the foreign species was venomous, but when she turned up at Hannah’s house she realised it was an Asian common toad, which are not dangerous at all.

Ozzy the toad is doing okay in his new home, says Jackie, who fed him “a little snack” of woodlice and bugs…

“We’re hoping Ozzy will be alright. When they’re wild caught, they’ve got to come into a domestic household which they can find a bit strenuous, and they don’t always show that they’re ill. But he’s made the night, and he’s eaten. Toads are quite robust. He’s done well, bless him.”