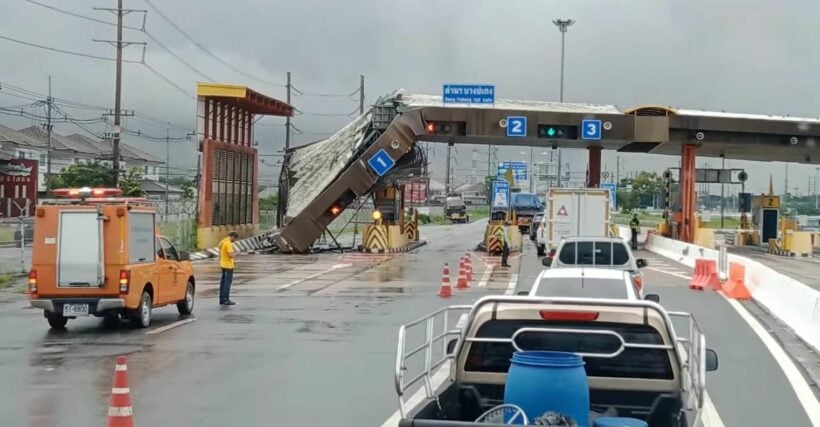 A toll gate in Chachoengsao province, central Thailand, collapsed at 10:34am today during heavy rain and strong winds. No injuries have been reported.

The roof above toll booth 1 at Bang Pakong Toll Gate on Highway 7 heading towards Pattaya completely caved in this morning during adverse weather conditions.

No injuries, deaths or vehicle damage was reported. The toll booth was badly damaged but the six-lane road is still in good condition.

“The Director-General of the Royal Thai Air Force has ordered the Department of Highways to come and fix the problem as soon as possible and investigate the facts of the incident.”

Yesterday at 8pm, a U-turn bridge closed for maintenance collapsed over the Rama II Road heading towards Bangkok in Samut Sakhon province, hitting four vehicles and killing two people. The incident was caught by dashcam footage.

The passenger in a Chevrolet sedan was instantly killed by the five tonne slab of concrete. The driver survived but sustained serious injuries. Two construction workers who were stood on the bridge when it collapsed were also seriously injured, one of whom later died from their injuries at Samut Sakhon Hospital.

Two weeks ago, a steel beam fell from an under-construction overhead road, also on the Rama II Road. The beam skimmed a pickup truck’s windscreen, missing it by just a few metres. The pickup collided with the beam and was flung into the air, but miraculously no one was injured. The incident was also recorded by dashcam footage.

In monsoon season, bad weather conditions heightens the risk of poorly-constructed or semi-finished architecture collapsing. Health and safety issues continue to cause daily accidents and casualties all over the country.

The Highway Division is currently investigating the cause of the collapsed toll gate roof to prevent such an incident from happening again.