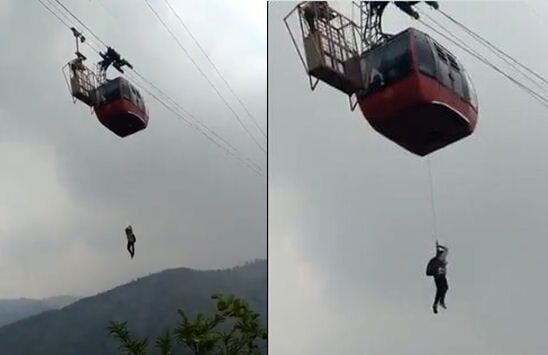 Tourists trapped inside 2 cable cars at a mountain range in India were horrified when both cable cars suddenly stopped 1300 feet above the ground on Monday. After being stuck in the air for hours, some of the tourists opted to lower themselves to safety by rope.

A total of 15 sightseers, 11 in 1 cable car and 4 in another, were stuck swaying over the Shivalak mountains for more than 1.5 hours when some chose to climb out and lower themselves down thousands of feet by rope. However, some children and elderly tourists were either unable or not prepared to use the rope and had to wait to be rescued.

In the end, firefighters safely evacuated the remaining tourists. No one was reported to be injured.

One woman trapped inside the cable car, at the Parwanoo Timber Trail in Himachal Pradesh state, was not prepared to hoist herself 1300 feet down to the ground…

“We can’t go down with the help of rope. We are old. We won’t be able to get down and the authorities have been unable to take any action.”

The incident occurred just 2 months after 3 tourists died when two cable cars collided in India. In April, more than 50 tourists got stuck in a cable car in the Trikut Hills in the Deoghar district of India.

In a shocking video of the Trikut Hills incident, a man swinging from a rope appears to be close to safety as a helicopter team attempt to pull him in. A few seconds later the rope slipped from his hands and he fell to his death. Another woman dangling from a rope also fell to her death and another woman died from her injuries from the collision.

Monday’s incident is reminiscent of a very similar incident which occurred in the same place 30 years ago. In October 1992, 11 people got stuck in a cable car over the Parwanoo Timber Trail. The cable car slid backwards, and the operator jumped down in panic and died. It took the army and Indian Air Force 2 days to rescue all 11 from the cable car.

5 best shopping malls in Phuket for 2022