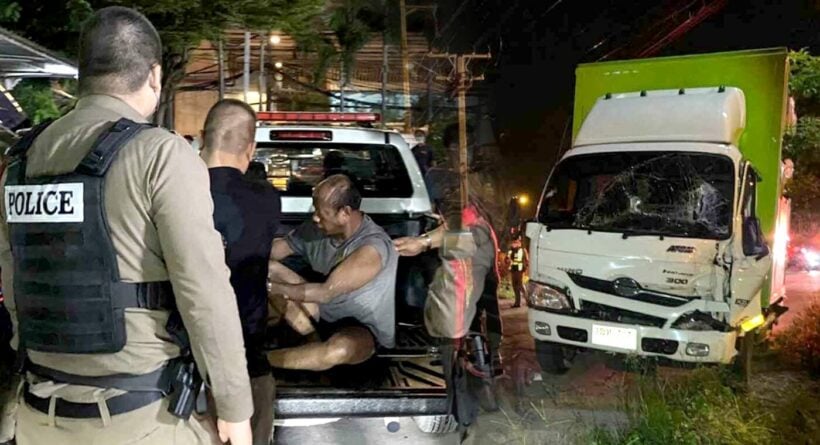 There have been a growing number of stories of cars and trucks running through checkpoints and then being chased down to find drug shipments inside. Sometimes massive amounts of drugs worth hundreds of millions of baht are found in the fleeing cars, helping to explain why someone would try to make such a daring escape. But is it worth it to lead the police on a high-speed delivery truck chase for 100 kilometres for a drug stash of… one meth pill?

On Tuesday night police gave chase to a delivery truck that burned through their checkpoint without stopping and ended up chasing the 46 year old driver 100 kilometres until a tyre burst, finally ending its run and leaving a trail of destruction in its wake. The car smashed into 10 other vehicles while it attempted to evade police from Srinagarindra Road in tambon Samrong Nua in Samut Prakan through Pathum Thani, all the way to Bang Sai in Ayutthaya province.

The white Hino delivery truck was flagged down by police for a routine inspection but it instead sped through the checkpoint without stopping. Assuming this was a sign of some sort of contraband in the truck, police followed in hot pursuit.

The truck weaved its way to the Phra Ram 2 expressway and out of town. The pursuing officers called highway police for backup and the truck raced through Pathum Thani and into Ayutthaya with a string of police cars on its tail. Finally, in tambon Ban Ma, a tyre popped and the truck had to stop.

The driver didn’t quite give up yet though and jumped out the passenger window, but he fell straight into a water pit and police were quickly able to pull him out.

A search of the truck found nothing illegal inside and it wasn’t until police searched his pants that they found the reason he was running: a single meth pill.

The driver was taken back to Samut Prakan and processed at the Samrong Nua Police Station where he allegedly confessed that the pill was his second, as he had already taken one to stay awake for his long delivery drive. He was so scared of being charged with driving under the influence that he took off, and was somehow unaware of the 10 accidents he had been involved in during the 100-kilometre chase.

The drivers he hit along the way began to trickle into the police station overnight to file complaints against the runaway truck driver. Those charges will be added to the prosecutions he faces for illegal drug possession, causing damage to property, and driving under the influence.