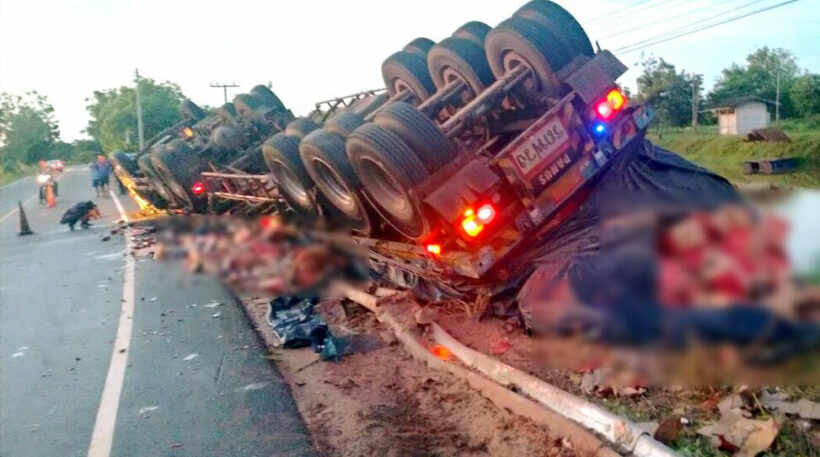 A tow truck carrying 1.5 million baht’s worth of beer overturned as it went round a sharp turn on a road in Khon Kaen province, northeast Thailand, this morning. The driver was instantly killed in the accident.

Peuai Noi Police Station received a call at 7:30am to say that an alcohol truck had overturned in Pueai Noi district. Police, doctors from Peuai Noi Hospital and rescue workers from Phuttayan Ban Phai Foundation rushed to the scene, but 44 year old Apichart [surname reserved] had already died in the crash.

Police found crates and crates of smashed beer bottles with an expected value of 1.5 million baht scattered around the Hino tow truck on the Sai Pueai Noi Road heading towards Maha Sarakham province.

Rescue workers used cutting equipment to retrieve Apichart’s body from the wreckage so that his body can be returned to his family for religious ceremonies to be carried out.

Sharing pictures of alcohol logos on social media in Thailand is punishable by up to one year imprisonment, a fine between 50,000 to 500,000 baht, or both.