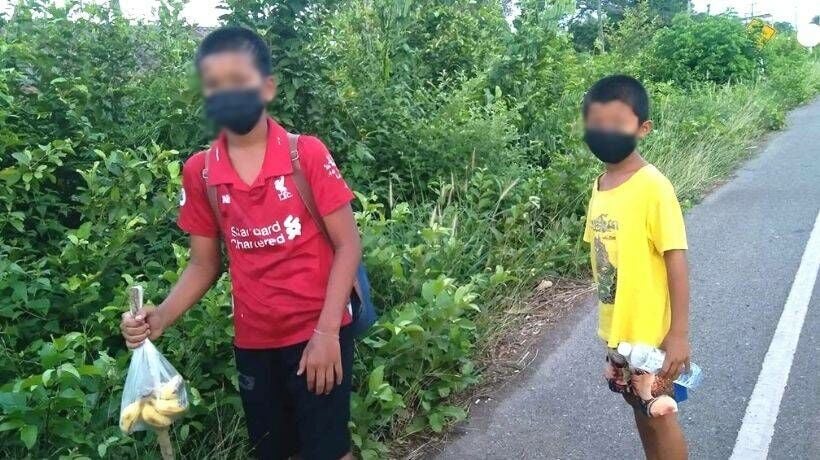 Or “Top and Tai’s Excellent Adventure”.

Two teenage boys attempted to walk from the Isaan province of Udon Thani to Phuket in southern Thailand, a distance of some 1,450 kilometres, because they wanted to visit their relatives. The pair didn’t get very far. When they were spotted walking along the road in Udon Thani, they were sent back home for their safety.

Residents of Udon Thani saw the boys walking along the Baan Dung – Baan Soom Sao Road and reported them to a rescue foundation. The two brothers, 14 year old Top and 12 year old Tai from Daan Dung district in Udon Thani, said they wanted to walk to Phuket to visit their sister and cousin because they missed them. They also told the rescue foundation team they wanted to go on a boat.

According to Thai media, the boys were carrying only 10 baht and a plastic bag containing 5 bananas. However, the adventurous, but slightly optimistic, brothers believed they could arrive in Phuket if they walked for 1 week. But they noted that they were scared they would be arrested when local residents reported them.

C- for Planning, E for Geography.

The foundation convinced the boys to abandon their expedition and return home. The brothers live with their grandparents because their parents work in Songkhla province in southern Thailand. The grandparents said they were worried sick and were overjoyed when the boys returned home. The said they don’t want their grandchildren to attempt the trip again!

The boys said their grandparents are very good to them, and they only attempted the journey because they missed their relatives.

A volunteer from the foundation was moved by the boys’ best intentions and said he is willing to take the boys to Phuket if their grandparents allowed.

The Thaiger will also organise a boat trip for them in Phuket if they get here, thanks to 5 Star Marine Phuket.

A piece of ceiling at Phuket airport falls, one passenger sent to hospital