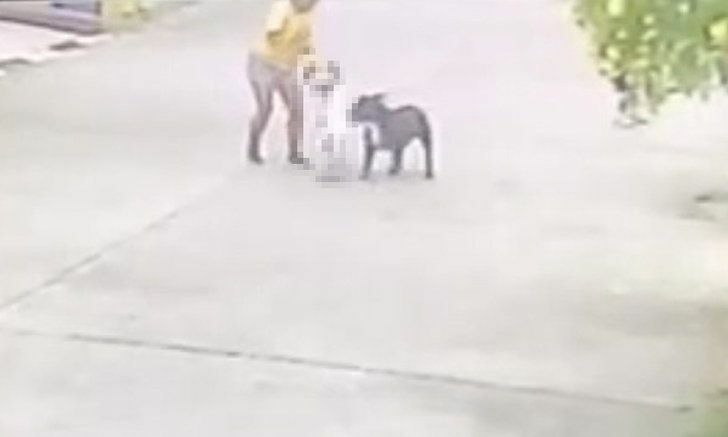 A 2 year old foreign boy is being treated in the ICU after he was mauled by a Pit Bull in Pattaya on Monday. The young child suffered a broken jaw, torn cheeks and an open wound on his head which required 200 stiches.

At 4pm on Monday, a foreign nanny took 2 foreign boys – aged 2 and 4 – on a walk in a village in South Pattaya. A Thai woman opened her front door to take the rubbish out as the 3 walked past and a Pit Bull, weighing more than 70 kilograms, ran out of the house and immediately charged at the 2 year old boy. The 4 year old managed to escape in time.

The two women tried to intervene but couldn’t get the Pit Bull away from the young boy. Neighbours ran over to help separate the dog from the child, who was already seriously injured.

One neighbour who ran over to help was 67 year old Somkiat. Somkiat said he saw the attack and immediately ran over to hit the dog with a stick. He said it took several minutes to get the dog away from the child. One neighbour’s CTTV camera captured the incident, which lasted for more than 5 minutes.

The boy was taken to Pattaya City Hospital for treatment and was later transferred to Bangkok Hospital Pattaya because of the severity of his injuries. The child is still under surveillance in the hospital’s Intensive Care Unit.

Police are investigating the incident after the boy’s parents filed a report at Pattaya City Police Station.

The following day, the floor at the scene of the attack was still stained with blood even after it had rained heavily during the night.

The dog’s owner, a Thai woman, has children of her own. She said her husband, a foreign man, is currently out of the country for work. The woman said the Pit Bull has bitten people twice before.