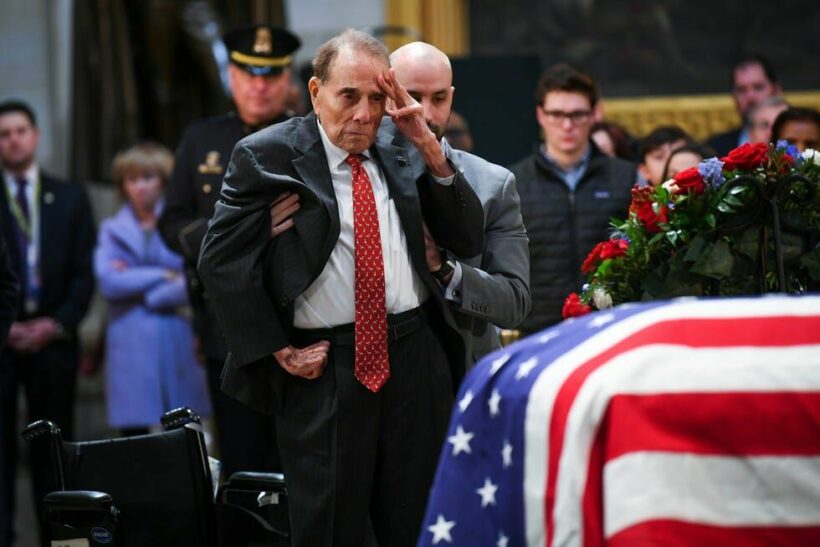 “Bob was an American statesman like few in our history. A war hero and among the greatest of the Greatest Generation. And to me, he was also a friend whom I could look to for trusted guidance, or a humorous line at just the right moment to settle frayed nerves. I will miss my friend. But I am grateful for the times we shared, and for the friendship Jill and I and our family have built with Liddy and the entire Dole family.”

Biden has ordered that flags at the White House and other public buildings and facilities be flown at half-staff in honour of Dole after hearing of his passing. Born in Russell, Kansas in 1923, Dole served in the U.S. infantry in WWII, suffering serious wounds in Italy and winning a medal for bravery. In 1976 he was the Republican nominee for vice-president to Gerald Ford, in an election the sitting president lost to Jimmy Carter. Two decades later, aged 73, Dole won the nomination to take on Bill Clinton, to whom he lost.

In 1991, Dole underwent surgery for prostate cancer, while in 2001 he underwent abdominal aneurysm surgery. In 2005, he was hospitalised after falling in his home. He was treated for a leg infection 4 years later in 2009. Dole is survived by his wife, former Sen. Elizabeth Dole of North Carolina, and daughter Robin Dole.