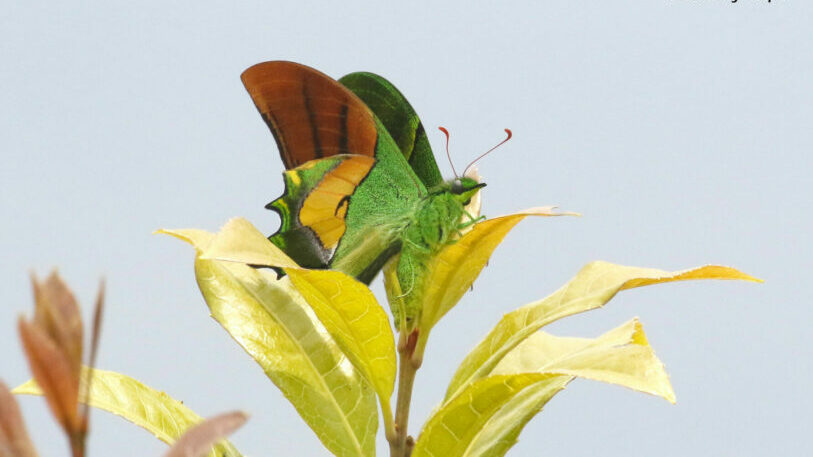 An out of work Thai chef was arrested for allegedly trying to sell 8 preserved butterflies, all of which are rare species, to undercover officials from the Department of National Parks, Wildlife and Plant Conservation at a shopping centre in Bangkok.

The unidentified 29 year old unemployed chef, who previously worked at a Japanese restaurant in a Sukhumvit hotel, allegedly told officials that the butterflies belonged to him and used to reside on the walls of the Japanese restaurant. Navee Changphirom, chief of the 1362 special operations unit of the wildlife department says that his officers had found an advertisement on Facebook that was selling rare butterflies. The officials contacted the butterfly dealer and said they wanted to inspect the insects prior to purchasing them. They arranged to meet at a shopping centre in Bangkok.

The man arrived at the shopping centre, allegedly with a box full of his framed butterflies. The police then arrested the unemployed chef after they decided the butterflies belonged to several rare species. The butterflies include:

The 8 butterflies have been valued at about 17,400 baht. Navee says the man faces charges of illegal possession of rare wildlife species and advertising them for sale, and trading in rare species without a licence. He faces over 15 years in prison and over a million baht in fines if he is convicted on all charges. He was later given over to the Natural Resources and Environmental Crime Suppression Division for further legal proceedings. The 8 butterflies have been seized as evidence.

Covid-19 prison death yesterday the second this week in Phuket