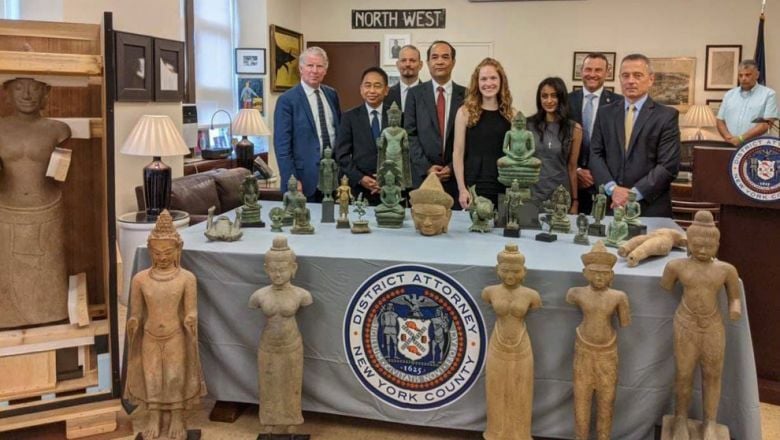 The United States is returning 27 stolen antiquities to Cambodia. The antiquities, which include Buddhist and Hindu statues from the Angkorian era, are valued at around USD$3.8 million.

It’s unclear where the statues were found, or when they were smuggled to the US, but reports say investigators in New York spent years working to recover the antiquities. Operations from Manhattan’s Antiquities Trafficking Unit and Homeland Security Investigations have recovered around 400 items that are being returned to 10 countries.

The Manhattan district attorney held a handover ceremony with the Cambodian ambassador on Wednesday. But it’s unclear when the antiquities will be shipped to Cambodia.

In a statement to the media, the Manhattan district attorney said…

The repatriation of these 27 stunning relics to the people of Cambodia restores an important link between the nation’s classical Angkor era and its modern customs and beliefs that, for far too long, was disrupted by the greed of stolen antiquities traffickers.

Recently, the US returned 2 lintels that were smuggled out of Thailand during the Vietnam War and then sold to European merchants. The 1,000 year old lintels, which are the top beams of a doorway, were carved from sandstone. They ended up in the Asian Art Museum in San Francisco in the late 1960s.