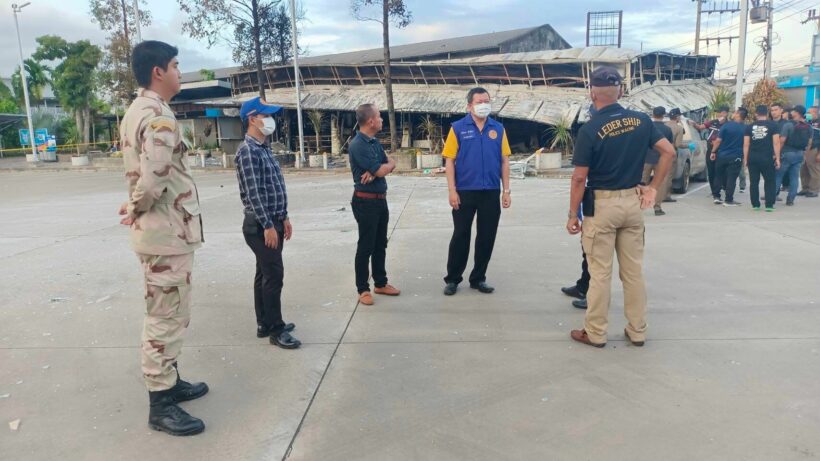 Following the bomb explosions in three Deep South provinces on August 16, officers found one man dead inside a 7-Eleven shop in the Su-ngai Golok district of Narathiwas province.

Yesterday, officers from the Explosive Ordnance Disposal investigated a 7-Eleven store inside a petrol station that was bombed as part of the attack and found the charred body of a 21 year old, Masarit Mama, under a product shelf.

Meanwhile, staff from a petrol station at the La Nga sub-district, in the Mayo district of Pattani province, handed over a suspicious bag to police yesterday. The staff was right to do so as police discovered the bag hid an improvised explosive device. The bomb was set to start working at the same time as the others, but it had malfunctioned and not detonated.

Masarit is the first and only death reported from the bomb explosion that night. Officers are still investigating each scene to gather evidence hoping it will lead to the insurgent group.

Bomb explosions were reported last night at a number of petrol stations and convenience stores in three Deep South provinces including Narathiwat, Yala, and Pattani.

The media reported the bomb explosions went off between 12.20am to 12.40am in six districts of Narathiwas provinces. Six branches of 7-Eleven stores, a Mini Big C in Bacho, Si Sakhon, Su-ngai Golok, Rueso, and Chanae were destroyed. There is no confirmation about the loss of life and injuries from the incidents.

In Yala, one witness informed the police of seeing four suspects riding motorbikes and throwing bombs into the convenience stores. Every convenience store in Yala is now temporarily closed for the safety of staff and residents.

Officers from the Explosive Ordnance Disposal and Forensic Science Office reported they would be investigated the scenes to gather more evidence to find the insurgents today.