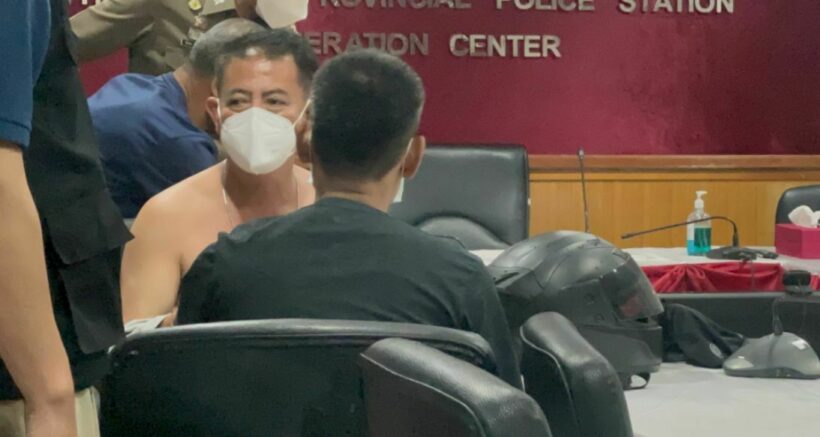 The man who robbed a gold shop in central Thailand yesterday has been arrested, and found to be a chief correctional officer. The man held up a gold shop in the province of Pathum Thani, stealing 6 necklaces. Altogether, the necklaces were worth about 450,000 baht. The thief snatched the pricey necklaces from a shop in a Tesco Lotus mall in the Thayaburi district yesterday morning.

After reviewing CCTV footage, officers from Thanyaburi Police Station recognised the thief as 58 year old Apichai Vejchakul. He is a chief officer at Thailand’s Department of Corrections. The police put pressure on Apichai, and he turned himself in at the station yesterday afternoon. He confessed that he stole the gold because he was in a large amount of debt.

Police searched Apichai’s house, and found 5 of the necklaces he had stolen, while 1 necklace had been sold. They also found Apichai’s motorcycle, cash, and the clothes and helmet he wore at the scene of the crime. The police were still searching for the gun that Apichai used to threaten the shop’s employees.

Police are on the hunt for a gold armed robber in central Thailand. The man held up a gold shop in the province of Pathum Thani this morning, stealing 6 necklaces. Altogether, the necklaces were worth about 450,000 baht. The thief snatched the pricey necklaces from a shop in a Tesco Lotus mall in the Thayaburi district.

A shop employee, Watcharapong, told police the robber pulled out a gun and grabbed his hand. He said the bandit then pounded the gun on the counter, and forced another employee to hand him 3 gold necklaces, and then another 3. All the while, the robber kept pulling Watcharapong by his hand, as though he wanted to take him hostage. But then, the robber released Watcharapong outside another shop in the mall before he fled the scene.

CCTV footage circling through social media shows the crook waving his gun at terrified employees to urge them to hurry up and hand him the gold. One employee hands him the gold, while another 2 crouch behind the counter together. The robber grips Watcharapong by the wrist. After the employees hand the items to the thief, he runs off, dragging Watcharapong with him.

Now, police are continuing to track down the crook, who dashed away on a motorcycle along the Rangsit-Nakhon Nayok route. The police have examined security footage of the holdup. The robber appears to be 40-50 years old.