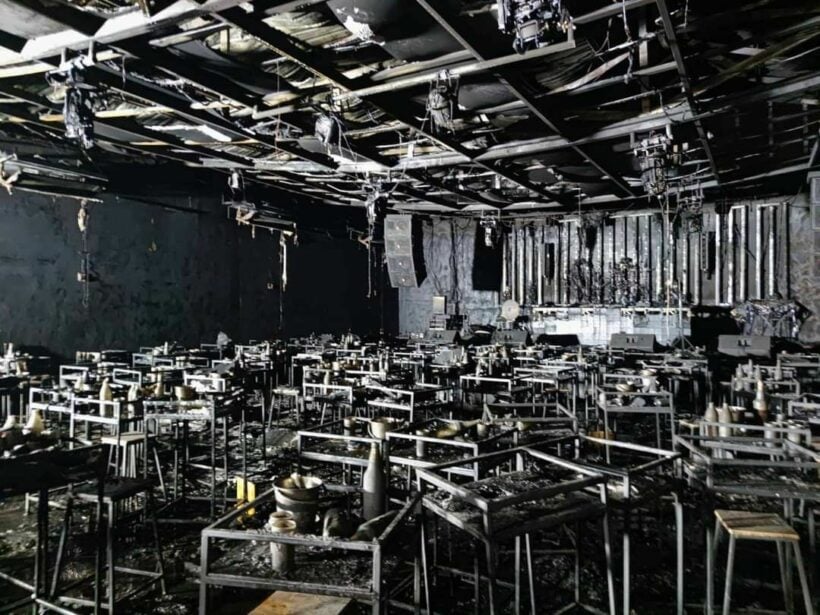 The Thai government has confirmed that Mountain B pub, which was struck by a devastating fire last night, was open without a license.

Police reported that the pub owner, Pongsiri [surname reserved] was arrested on July 16 this year for opening Mountain B without a license and for opening beyond the times permitted by law.

An initial investigation reveals the venue had only two fire extinguishers, which is not enough for the capacity and space of the venue.

Thirteen people died and more than 40 were injured last night after a fire broke out at the Mountain B night club in Chon Buri province.

Located on Sukhumvit Road in the Sattahip District of Chon Buri, a blaze ripped through the one-story glasshouse, that has only one entrance in and out of the building, at about 1am when the club was about to close.

Jiraphan Turaphan, who survived the blaze informed police officers that the fire started from the ceiling. The 51 year old man said he heard several exploding sounds as the fire spread quickly through the club.

It was reported that there were over 50 people inside the club at the time. They tried to flee from the scene but there was only one door at the front. A number of people perished at the door as a result of the rush to exit the club

Club staff revealed the fire engulfed the building within five minutes and it took firefighters over two hours to control the blaze. Firefighters made public there were many flammable materials inside.

The last update at 7.11am today, reported that 13 people were killed at the scene, nine men and four women, and more than 40 people were injured and sent to hospitals nearby.

Police officers from the Plu Ta Luang Police Station believe a short circuit caused the fire but added they were still conducting an investigation.

Pakkathorn said the people who were injured would get 4,000 baht, those who were disabled by the fire would get at 13,300 baht, and the families of the dead people would get 29,700 baht.