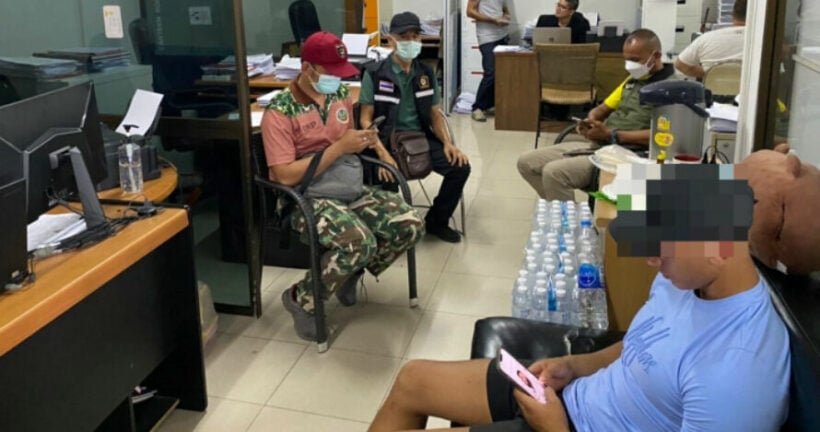 The foreign parrotfisher has been caught and detained by police in Phuket, southern Thailand, and faces legal action. Thailand’s Minister of Natural Resources and Environment Warawut Silpa-archa made the following statement this morning…

“Yesterday, August 15, at 3:30pm, Roslan Benedia of Dutch nationality was detained and questioned at a police station in Phuket over a video he posted on his TikTok account @roslanofficial. Roslan and the boat caption teamed up to hunt. In the TikTok clip, he is stood on a boat holding up two parrotfish, three unknown fish and a speared moray eel hanging from a knife.”

“Officers from Phi Phi Police Station are collecting evidence and will prosecute Roslan according to the law. The boat owner, boat service and speargun renter are also under investigation.”

On Saturday, Roslan apologised for hunting the protected species of fish.

The foreigner seen parrotfishing in the sea off Thailand is facing a five-year prison sentence and a 20,000 baht fine if he is caught.

“Catching animals in the park area is wrong. How can you still catch a parrotfish that is a protected animal? Parrotfish are very important in the marine ecosystem. They also help to get rid of dead corals. The person who did this has to take responsibility. I want to help with this matter.”

Many others wanted not only the foreigner punished but the authorities who don’t punish the offenders.

“I’m angry, my sister is important to the underwater ecosystem. They eat dead coral to prevent algae from covering the coral again. Even if I’m a tourist, I don’t have the right to kill and catch animals like this. Parrotfish live well under the sea for people to go diving to see.”

The Department of National Parks Wildlife and Plant Conservation (DNP) made it known they are looking for the man seen catching parrotfish in Krabi province.

“The officials are currently searching for the suspect to take legal action against him. The foreigner will face charges of harming or taking animals away from the national park area, and/or causing damage to the ecosystem, under the National Park Act BE 2562 (2019).”

Section 16(3) states: Takes an animal out or harms it by any means, to be dangerous to animals, as well as Section 21. The official shall have the power to order the offender under Section 16 to leave the boundary of a national park or to refrain from any act. in the national park which is considered an offense under Section 24.

Any person who violates section 16(3) shall be liable to imprisonment for a term not exceeding five years. or a fine not 20,000 baht or both.