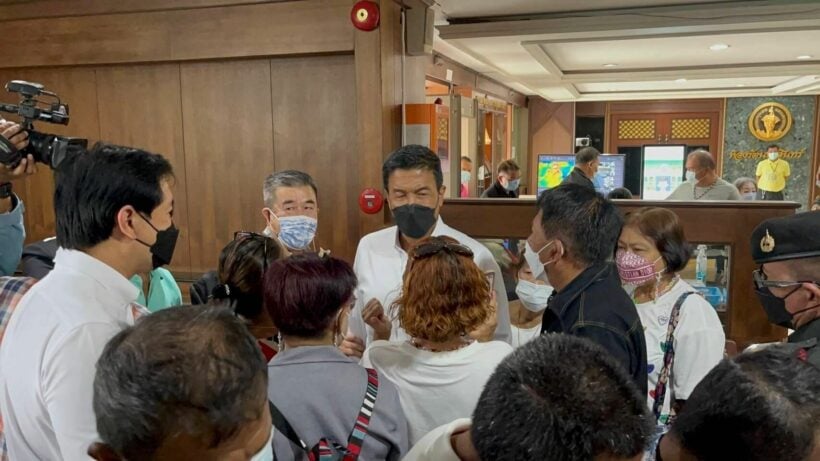 The community leaders, led by a former Bangkok Metropolitan Council candidate, Ronnachai Sangkamitkun, visited Chadchart’s office at BMA City Hall near the Giant Swing, and asked him to provide more information about the city’s corruption investigation into high-profile district officers.

Ronnachai added he is confused why Lat Krabang district is included on the corruption list.

“I and other community leaders have been working with the district director for a long time and have never seen the director involved in any corruption. I and other Lat Krabang residents love and trust the director. If Chadchart doesn’t have evidence, Chadchart should stop giving interviews.”

Ronachai added that he isn’t making excuses for the district director but wanted to point out that Thanasit stepped down to take care of his sick father, not because he is guilty of corruption as some people might assume.

Chadchart urged Ronnachai and the group to wait for the investigation result and evidence.

“If he is corrupt, he will be kicked out. If he is clean, he will stay.”

Chadchart says the investigation is his duty and that the group will not speed up the processes by visiting his office.

“Time should be spent on work to make a living. Lat Krabang district is far from my office. I will visit residents by myself. No need to come here.”

Chadchart also urged the group to encourage the district director if they are worried about him.

“The district director is a grown-up and can take care of himself. I didn’t make an order to move or remove any officers yet. The issue is still under investigation.”

Bangkok Governor Chadchart Sittipunt informed Thai media yesterday that there are a number of high-profile district officers in the city involved in corruption. The identities of those officers have not been revealed, but leaked media reports allege most of them worked under a former Bangkok governor.

According to reports, leading district officers from Latkrabang, Bang Khum Tien, Prawet, Taling Chan, and Bangkae districts are involved in the grafts, and 1 officer on the list resigned today before he was pushed.

The report added that high profile figures in the culture, sports and tourism, traffic and transport, and finance departments are in line to be fired or moved to other positions because they ignored Chadchart’s new measures and policies.

Chadchart yesterday made it known to the media that many residents had filed corruption complaints to him regarding senior figures in the governor’s office. The 56 year old said he’d set up a committee to investigate the issue because of those complaints and found out it was true.

Chadchart said there wasn’t enough conclusive evidence in some cases but added those involved in unacceptable practices would be punished according to the law, and the maximum penalty was exclusion.

The governor insisted he has been fighting against corruption since he took office and delegated people to investigate any illegal acts while serving in his office.

“Bangkok officers shouldn’t work like being family of each other. If corruption is happening, we would fully punish or fire those immediately.”

Thai actress claims she was sexually assaulted by police officer