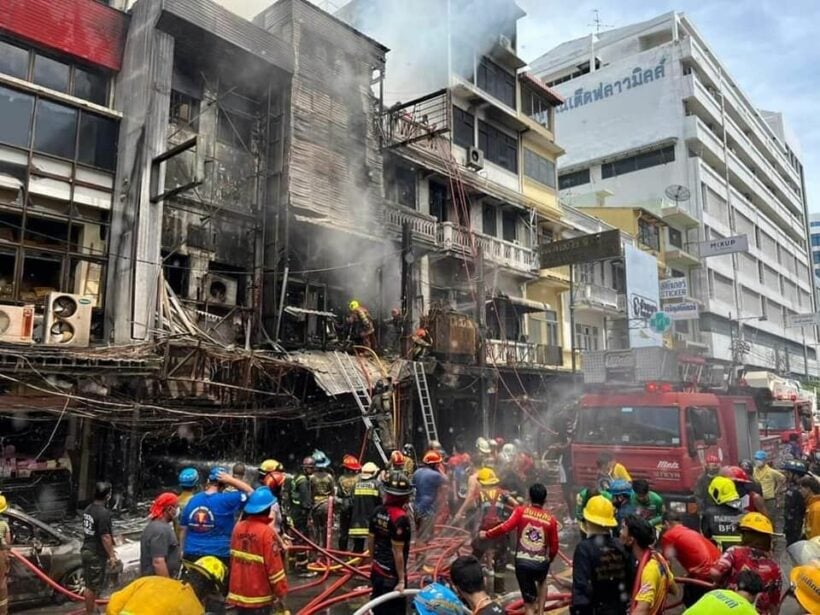 Stall sellers and the owners of the Ratchawong Rungrueng packaging shop building, which caught fire in Bangkok’s Chinatown on Saturday, say they are going to sue the Metropolitan Electricity Authority for negligence after a broken transformer caused the blaze that killed 2 people.

The faulty transformer caught fire and quickly ripped through the 3-story building on Ratchawong Road in the Sumphanthawong district of Bangkok, also affecting 4 nearby buildings and stalls, causing the death of 2 people and millions of baht worth of damage.

The inspector of police from the Chakkrawat Police Station, Ponlawat Promsorn, yesterday spoke to the building owners, and stall sellers, and they estimated the damage caused by the fire is about 10 million baht.

They revealed they are suing the MEA and other relevant departments for their recklessness. The building owner revealed to the police and media that they asked the MEA to repair the transformer many times, but they allegedly did nothing.

The Deputy Spokesperson of the Royal Thai Police, Kritsana Pattanacharoen, reported that the Public Works and Town & Country Planning Department officers would investigate the building structure today to confirm whether it is safe to enter. Once this is confirmed the police will investigate the cause of the fire.

The death toll has risen after the fire in Bangkok’s Chinatown this morning. While 1 person was reported dead at the Sampeng market earlier today, that number has now jumped to 2. The bodies of the man and woman killed by the blaze were reportedly burnt beyond recognition. The man is identified as 34 year old Phetduang, and the woman is identified as 52 year old Jiraphat Soommark.

One body was found on the floor of a shop. The second body was discovered on the second floor of the shop after the fire had been put out. A shop employee told police that the two people killed had been workers who came to fix power cables in front of the shop.

The employee said she and other vendors were criticising the workers for not tidying the cables away, leading to a short circuit, when she saw liquid pouring from the transformer, followed by two explosions. She said she ran away terrified to the opposite side of the road as the fire spread from the transformer to the building.

The building has been declared off-limits for a safety inspection over fears it might collapse.

One person died in a fire in Bangkok’s Chinatown today. The blaze broke out in the historic Sampeng market in Samphanthawong district, located beside the Chao Phraya River. Details of the victim’s identity haven’t been released yet.

Terrified shoppers ran for their lives as the blaze gutted 5 houses before firefighters arrived on the scene to put out the flames. Some rescue volunteers choked on the smoke and were rushed to Klang Hospital. Bangkok Governor Chadchart Sittipunt was reportedly on his way to inspect the scene.

This news comes after a fire gutted about 30 houses in the city’s Pathumwan district last week. Locals whose homes were burned to the ground were housed at a temporary shelter near a community centre and received relief services. The National Housing Authority has offered the victims free accommodation for 1 month. Four of the locals suffered from smoke inhalation, and traffic in the area was closed to help a bedridden patient reach King Chulalongkorn Memorial Hospital.